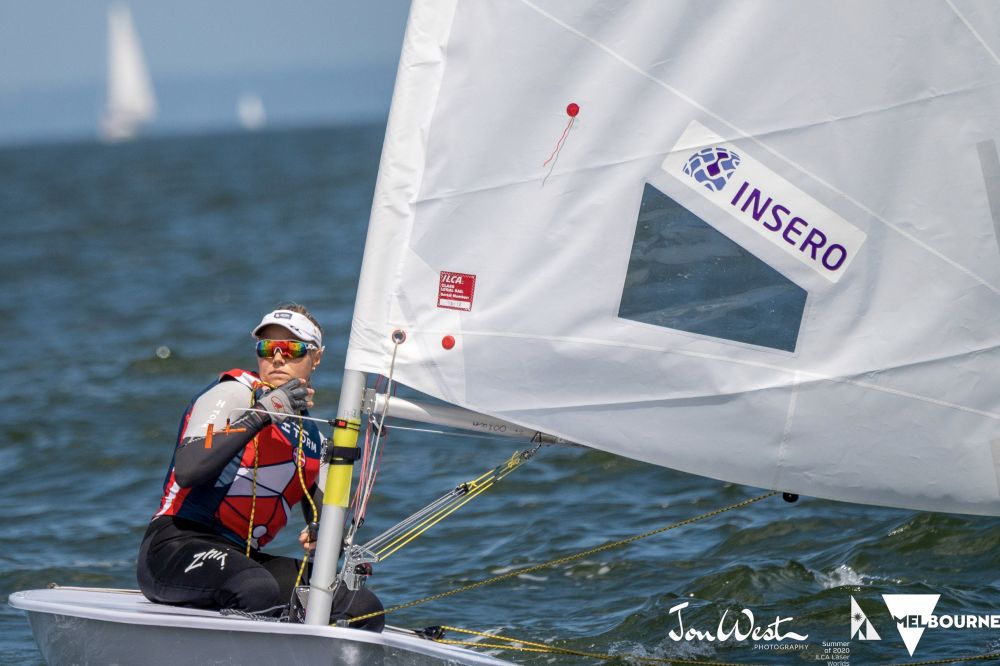 After a day of light and fluky conditions in which only one race could be sailed at the ILCA Laser Radial Women’s World Championship, defending titleholder Anne-Marie Rindom (DEN) took first place in Yellow Fleet while Marie Barrue (FRA) won Blue Fleet.

“It was a bit light,” Anne-Marie said of the conditions. “The change didn’t really come through.”

Yellow Fleet had the better of the weather, getting away shortly after the scheduled start time in 6 knots of breeze and managing to finish before the wind began swinging wildly.

Those in Blue fleet had a frustrating day, with race one starting almost on time but being abandoned at the first mark owing to a 30 degree shift. It is an ill wind that blows nobody any good and Australian Olympic hopeful, Mara Stransky, said she was caught too far left in a poor position when the abandonment came. She regrouped and finished the re-started race in fifth position. “I’m happy after such a whacky day,” she said.

“It’s a nice way to start the event,” she said. “The race committee had a challenging day with all the wind shifts, but it’s good to get one race in, to get the regatta started.”

The ILCA Laser Radial Men’s World Championship is being sailed at the same venue, with the fleet dominated by Australians.

But it was a Russian, Daniil Krutskikh, who won the only race of the day, from locals Michael Compton and Jordan Makin.

Like the women’s Blue Fleet, the men endured re-starts and abandonments before finally getting a result.

With light winds forecast for tomorrow morning, the race committee has announced that first signal will be at 2pm, as scheduled, but if the winds settle as forecast, they will try to get three races sailed so the regatta is back on schedule.