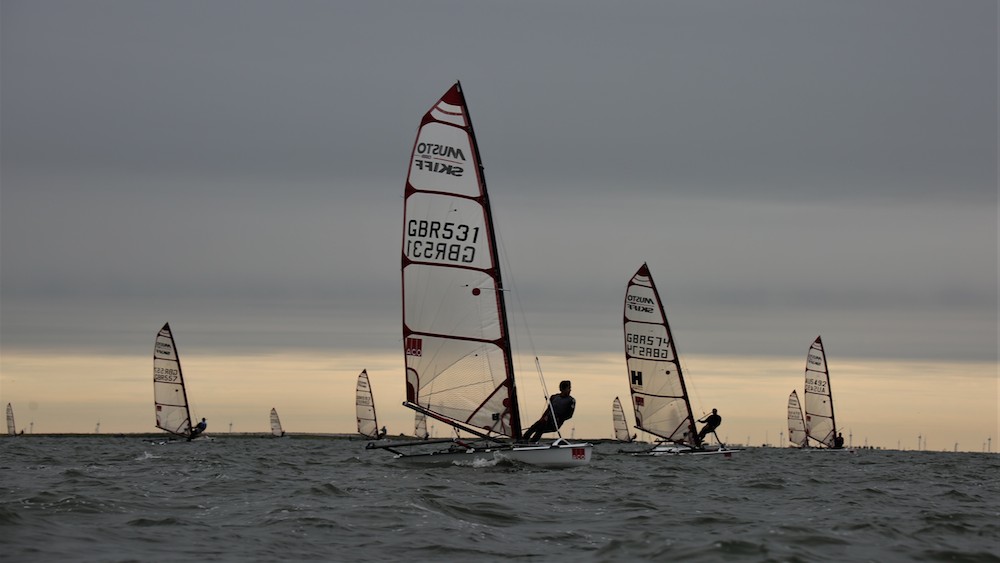 After the third day of the ACO 10th MUSTO Skiff World Championship 2019, Rick Peacock (GBR) grabbed a big lead in the provisional overall ranking. The talent coach of the Dutch High Performance Project is nine points ahead of compatriot George Hand, who stormed into the top three with two bullets.Title defender Jon Newman (AUS) fell back to third place overall. The sailing conditions on the IJsselmeer off the coast of Medemblik were light with a variable breeze from the southwest.

“This must be my lucky day,” said George Hand afterwards. The new number two of the provisional ranking may call itself the winner of the day with a score of 4-1-1. However, it was not easy. “The wind was very variable. Left wing paid quite well, so I did a good job with protecting the left and making some gains downwind. I always seemed to find a route to the front. I am actually one of the heaviest guys in the fleet, so normally I am not so good in this stuff. Just sailing sensibly today seemed to help.”

Rick Peacock, on the other hand, performed less consistent, but was able to take the lead firmly. He finished in eleventh, fortieth and seventh place. Peacock about his second race of the day: “I was doing ok, but I got slightly on the outside of a big gust of wind. I thought it would come down on me, but it never did. All the boats inside me kept on lifting. I came at the top mark in a deep position. I struggled to recover. I kept trying things. I was gambling a bit, but it did not really work. Fortunately I bounced back in the last race. Boat speed wise I found it a bit tricky today, because there were a lot more boats with similar kind of speed. On the other days, I took a lot more boats on the downwind.”

His pupil Pim van Vugt from the Dutch High Performance Project is currently the best Dutchman in ninth position. Peacock: “It is cool to race against Pim. It is nice to see it from a different perspective. You go from a coach boat to sailing. We have been talking about the racing and we can help each other like that.” Van Vugt said about that: “It's a kind of training for us. We have a slightly different relationship now, because here we're both sailors. On the other hand, we're still working on the same thing, and that's racing.” Despite the difficult conditions, Van Vugt managed to maintain his ninth place overall today: “It was quite difficult, because there were a lot of showers. That made it a bit unpredictable. I couldn't really hold on to anything. I kept going through the middle, but that didn't work well. In the last race, I thought: ‘I just have to make a plan and stick to it’. That went better.” The 49er crew from the High Performance Project finished sixth, just one spot ahead of his coach.

German sailor Iver Ahlman took advantage of his low weight by starting off with a third and fourth place. Ahlman: “In the first race I was lucky with a very good start and in the second race I managed to pop out and come out in the front at the first mark. I had a very good downwind speed all-day and managed to gain places on the run. Sometimes I threw it away upwind, but I always caught up downwind. I am lighter than most of the other sailors so that is an advantage on the run.” He continues: “The last race was poor. I had a very bad start and I was on the wrong side of the line. I had a hard time fighting myself forward.” That resulted in a 19th place. He is currently in 18th place overall.

Today’s results reflect the difficult conditions well. Many sailors scored high and low numbers, like yesterday’s leader Jon Newman. The title defender finished 3-28-18 and dropped two places to the third podium position, followed by Bruce Keen who finished 12-7-20. Although Don Kilsby took the first bullet this morning, he added a 38th place in the second race and a second in the third.

Meanwhile intensive racing with 91 MUSTO Skiffs in one fleet is taking its toll. Today, two sailors with broken masts returned to port prematurely. An English sailor offered a helping hand. Just one, because the other one is in a plaster after an unfortunate fall before hoisting the spinnaker on day two.

Tomorrow on Thursday July 11th the sailors will enjoy a well-deserved lay day. The next three races are scheduled for Friday 12 July.

The top five after nine races and a discard: