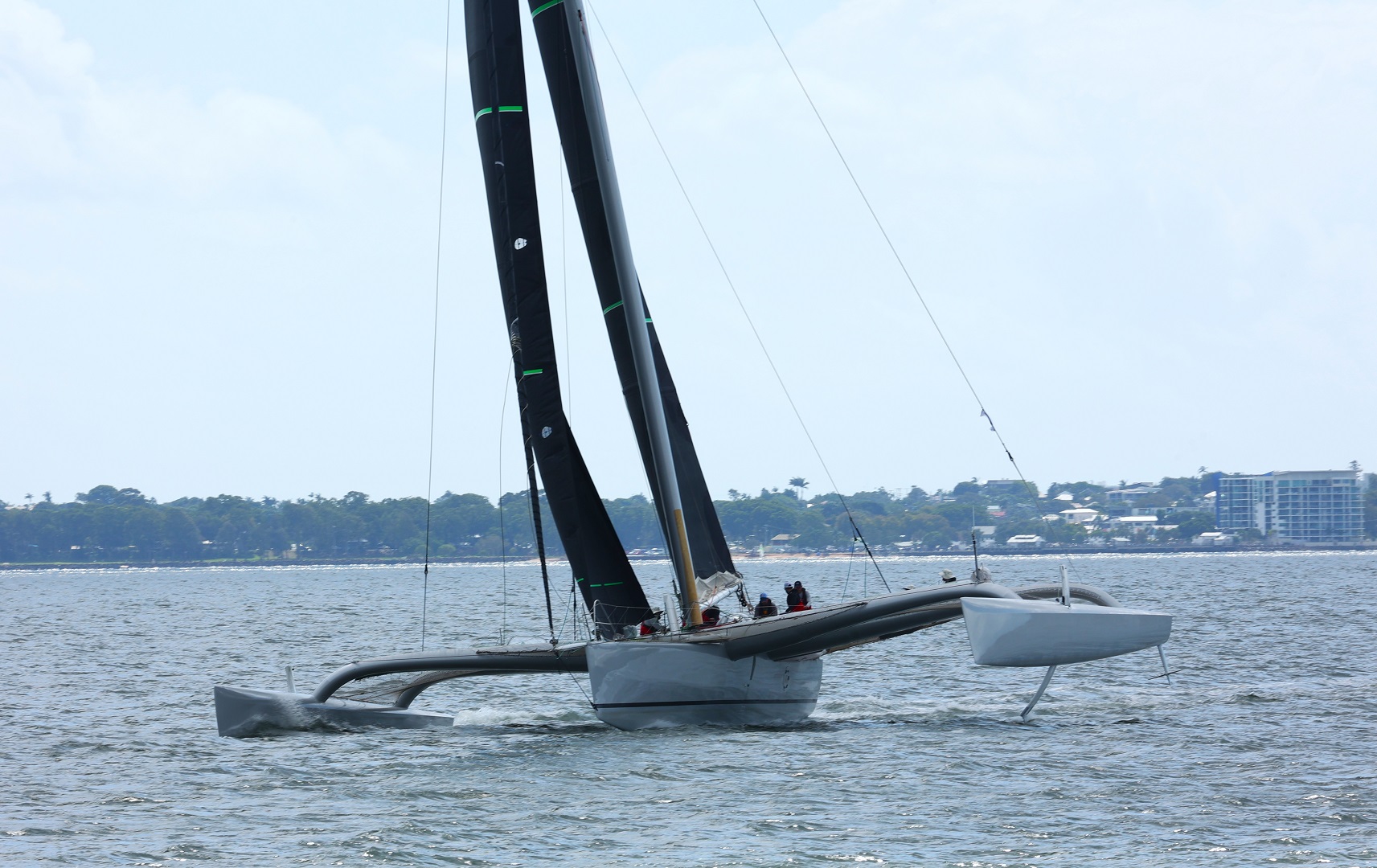 Rex, the ORMA60 trimaran previously known as New Zealand’s Team Vodafone, has bettered the previous race record, set by Beau Geste MOD70 in 2019, by more than an hour in this year’s City Winery Brisbane to Gladstone Multihull Yacht Race.

Rex arrived Easter Saturday at 1:31am setting a new race record of 14hrs 16mins 28secs which was an average speed on 21.3 knots. The previous record was 15hrs 26mins 52secs and so it has taken 1hr 10mins off it, which is an amazing performance. The crew felt the conditions were a little rough and they had to slow the boat to under 30 knots at times, particularly around Indian Head. If the sea state was a little flatter, it could have gone faster.

It would have been interesting if other large trimarans like Beau Geste MOD 70 and the Scallywag Trimaran had entered and how that would push the crews and improve the tactics. We should expect to see the record continue to improve over the coming years.

The skipper Dale Mitchell said they had no problems, apart from minor damage to two sails. This was great considering its last race was the 2021 City Winery Brisbane to Gladstone Multihull Race, 12 months ago. Rex is based in the Whitsundays and should be at this year’s Airlie Beach Race Week and Hamilton Island Race Week. Dale Mitchell previously raced on a 30-foot trimaran called Morticia and won Brisbane to Gladstone line honours in 2016 and 2015.

There was a small contingent from the Multihull Yacht Club Queensland and the Gladstone Mayor Matt Burnett welcomed them to Gladstone. Matt Burnett also presented the tired crew with the traditional carton of beer at O’Connell Wharf.

The second multihull across the line was Rogntudjuuu, a 17m Crowther Designed Catamaran which set the race record in 2001 with a time of 20hrs 35mins. It finished about five hours behind Rex.

Rogntudjuuu went hard at the start and were seen flying a hull heading to the Redcliffe mark. While heading up the Fraser coast it suffered rudder damage and had to replace one of their rudders with a spare one that was on board. Geoff Cruse said they sailed conservatively until Breaksea Spit and at one stage Rushour came within 1 NM of them. Rushour finished about one hour behind Rogntudjuuu while Renaissance and Storm Bay were rounding Lady Elliot Island.

At the race presentations Dale Mitchell, the skipper of Rex was presented with a cheque for $5000 for breaking the race record which was donated by D+K Active Sportswear. D+K donates prize money each year and if it is not claimed then it jackpots to the following year. Rex was also declared winners of both handicap divisions Offshore Measurement Rule (OMR) handicap and Arbitrary (performance based) handicap. Rushour were runners-up in all handicap divisions followed by Rogntudjuuu.