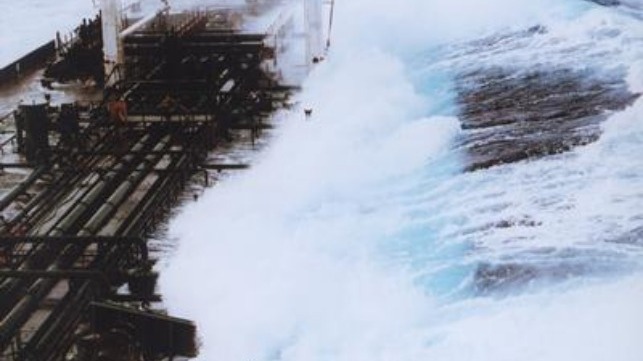 Research led by the University of Southampton suggests that rogue waves are occurring less often, but becoming more extreme.

Waves are classed as rogue when they are over twice the height of the average sea state around them. From trough to peak, past observations have put some at over 30 meters (98 feet) high. The fiercest are capable of damaging or sinking ships, can wound or kill crew members and on occasions have swept people off the shoreline and out to sea.

A team from the University of Southampton and The National Oceanography Centre (NOC) examined over 20 years of information (sourced between 1994-2016) from 15 buoys which provide surface data along the U.S. western seaboard – stretching from Seattle in the north to San Diego in the south.

The data showed instances of rogue waves fell slightly, but that rogue wave size, relative to the background sea, increased. Rogue waves are more prevalent and of greater severity in the winter months and are happening with increasing frequency within calmer background seas.

Rogue waves along the western shoreline of the U.S. have fatally swept people out to sea at Point Reyes, Maverick’s beach, and Arcata, in California, and Depoe Bay, Oregon. In the year 2000, the NOAA research vessel R/V Ballena capsized off Point Conception, California, and in 2006, M/V Westwood Pomona encountered a rogue wave off Port of Coos Bay, injuring one person and damaging the vessel.