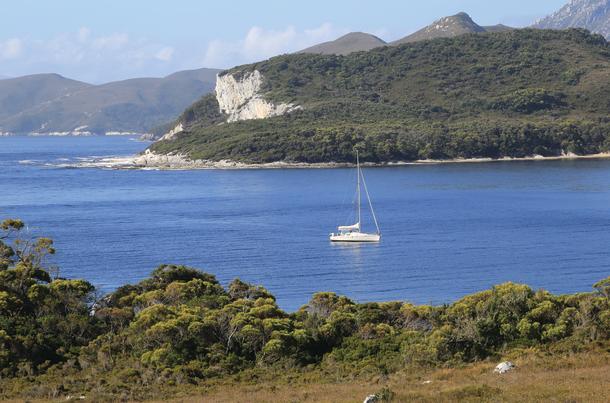 Where are you on the cruising spectrum? Is sailing performance a priority, or are you looking for a floating home unit? If the pleasure of sailing is one of the attractions of cruising, especially if your budget is limited, perhaps you should consider converting an ocean racer for cruising.

Since the late 1970s, racing yachts have had high volume hulls, which equals lots of room. They also become obsolete quickly, which means low resale value.

On the other hand, some are also built very lightly with questionable keel and rudder attachment. We are not interested in these light, throwaway boats, but those that were well constructed initially.

They are not for everyone. If your cruising will take you to faraway ports and unknown slipways, you would be better with a more conventional style of boat. However, for coastal cruising where you return to the home port for your annual haulout, an old ocean racer could be a lot of boat for the money. Particularly older boats like the original Farr 1104, or one of its competitors. Two such boats will be discussed in this article, along with a more recent Jon Sayer design.

What can they provide?

A few years ago I spent the day gliding south along the Whitsunday Passage on a gentle close reach. Matika III, the 1976 Lidgard One Tonner I was delivering to Brisbane, slipped effortlessly along at about six knots. The autopilot barely murmured, but I was nervous about how it would cope when the predicted twenty knot northerly arrived.

I had raced on this boat and, also, the Farr 1104s it was designed to beat so I knew how challenging they could be on the helm in heavy running. I had also cruised many miles on Matika III, including a delivery from Hobart to Brisbane, but always with at least one other person aboard.

When the breeze kicked in at sunset, I wandered forward on the wide, flat deck and dropped the main. As I hauled on the downhaul I had rigged for the trip, the sail fell easily into its lazy jacks.

We ran through the night under roller-furled headsail, averaging seven knots to eight knots. Not fast for this type of boat, but quick enough for single-handed passage making and very comfortable. We anchored at Great Keppel just after the breeze dropped out the next morning.

These beautiful timber New Zealand built Lidgards inspire intense loyalty. Reg Eggers has owned Matika III’s sistership Domino since 1997, sailed her across the Tasman and operates what he claims is the Whitsundays’ most environmentally friendly day cruise. Guests are encouraged to experience the sailing qualities of the yacht, as well as enjoy their surroundings.

Both these boats have had considerable upgrades, including furlers, anchor winches, lazy jack sail covers, self-steering, a dodger for Domino, and a huge bimini for Matika III.

Domino had the cockpit altered, the transom cut out, the cabin extended and the interior rebuilt, while Matika III remains fairly original. Simon Steenland’s Belle, an 11.6 metre Sayer design, had a total refit as she morphed from racer to cruiser.

Having built the boat initially, with boat builder Eelka Wouda, Simon had no qualms about putting Belle back in the shed when his sailing aims changed. With a background that includes the construction of Queensland’s 30.5m sail training vessel South Passage, Simon is very confident about altering racing boats to suit their new life as cruisers. He told me “with a lot of boats people shouldn’t hesitate to put a chainsaw to it. A lot of racing boats would make wonderful, roomy cruising boats with a bit of surgery.

“For example, most have enormous cockpits that could be considerably reduced in size. People should not be afraid of making changes like extending the cabin a metre or so. This gives far more room down below. It’s relatively easy to do and, like a lot of these alterations, it may take time, but doesn’t take a lot of money.”

While I agree with Simon about the desirability of making changes, please do not make structural alterations without professional advice unless you have the experience to do so while maintaining or enhancing the strength of the boat.

To transform Belle from flat out racer to comfortable cruiser, Simon made a new keel, reducing the draft from 2.5m to a very reasonable 2.0m. He also rebuilt the interior to include an excellent galley, wrap-around settee/dining area and a private head and shower area. The interior fit out is understated and classy in mahogany, white laminex and leather upholstery.

On deck, Simon shortened the leech of the mainsail to lift the boom above a fixed cockpit shelter. This has a hard top to reduce heat penetration, with clears all round that can be rolled up.

The hard top is a major comfort factor and involved a lot of labour, but not much money. Simon also added an anchor roller and winch, furler, tiller pilot and dinghy storage. Rather than mounting the inflatable on chocks on the foredeck, Simon cut its transom to the curve of Belle’s deck. This allowed it to sit more securely and about 120mm lower, increasing visibility from the helm considerably.

The mainsheet traveller was removed to make the cockpit safer, leaving the mainsail sheeted from a single point aft of the tiller. Twist is controlled by the boom vang. Simon reckons losing a fraction of speed is irrelevant if it means not having a traveller to trip the crew.

It can be far easier to adapt the deck layout and sail handling systems of a racer to make the boat easy to manage, than trying to optimise a cruising layout designed primarily for economy. For example, the racer will have powerful winches and plenty of them, all halyards and reefing lines led aft to dedicated jammers and quality deck hardware and lines. But how do you decide if this sort of conversion is for you?

Ex-racing boats are not for beginners. If you are not confident you can sail one offshore, short-handed and in heavy weather, you would be better to find a more forgiving type of boat.

Can you do the alterations yourself? Any moderately handy person can alter a boat to suit his or her own requirements, given ample time. If you do not have the time or skills, you could end up spending more than it would have cost to buy a finished boat at the outset.

If you do have a tame boatbuilder, however, whose rates you can afford, it may suit to do ‘pay as you go’ alterations. That is, to sail the boat as is, do the minor work yourself and gradually have changes professionally made as the budget allows.

Racing boats are subject to extraordinary stresses far in excess of what should happen when cruising. The exception is grounding. It is vital to ensure the keel structure is strong enough to cope with both going aground and supporting the weight of the boat when hauled out. The opinion of a good marine surveyor will be invaluable for structural alteration recommendations.

These boats will not be as comfortable at sea as a dedicated cruising design, although they will be faster and more engaging to sail. If your plans include coastal passages and lots of time at anchor, a converted racer may be excellent value for you.

To evaluate the likely comfort of various boats, you could try the Comfort Ratio devised by noted yacht designer Ted Brewer. This measure of motion comfort is only useful for comparing similar boats. It is based on the idea that for most people, the speed of motion determines their comfort and likelihood of becoming seasick. There is a link to Brewer’s website at the end of this article.

What should you look for?

Construction must be strong: built for ocean racing and proven at sea.

Entrants in Category 1 races like the Sydney Hobart must conform to strict rules about structural integrity and stability. For coastal racing, they must meet slightly less onerous Category 2 standards. If the boat was raced offshore within the past two decades, it should have complied with these regulations.

This does not guarantee it has not been altered, or that the stability has not been compromised. To a certain extent, the added weight of a cruising fit-out will compensate for the lack of human ballast with which these boats were designed to race. However, you must satisfy yourself that any boat under consideration is still self-righting and that deck openings, either existing or planned, do not compromise panel strength in the deck or cabin.

Look for a relatively moderate rig that will not fall down the moment someone makes a mistake. It will almost certainly rely on running backstays and you will need to ensure these are tended correctly.

Although the boat will probably come with a large sail inventory, the basic working sails: main, #1 and #2 headsail and spinnaker/s may be nearing the end of the useful life. Heavy weather and storm sails could be in excellent condition, as they are rarely used.

You will eventually need to replace racing sails with more durable cruising sails. However, if you choose a popular class you may be able to buy retired racing sails at a fraction of the new price.

You will also need to decide which sails to keep aboard. In cruising mode there will not be space to store them below. Sails on the cabin sole do not add to the ambience of any boat!

Is the draft acceptable for your preferred cruising areas? Most racers have quite deep keels. Unless you are prepared to follow Simon Steenland’s lead and replace the keel, you are stuck with deep draft. Along most of the Australian coastline, this is not an issue.

There is a lot to consider. If you can find the right boat, a recycled racer might make an excellent cruiser.

It will be fun to sail with a comfortable interior, lots of deck space and the ability to make miles when needed. If money is tight, the more you are prepared to do to achieve your aims, the closer you will get to your vision. ≈