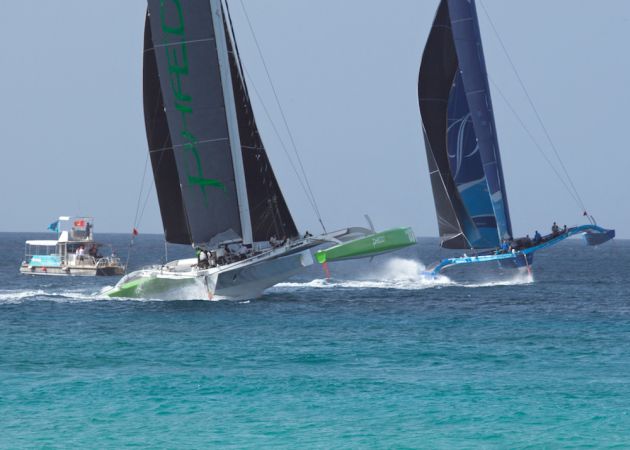 Bridgetown, Barbados (21 January, 2016): Big winds, big speeds and the fastest ever times ever recorded made the 80th anniversary Mount Gay Round Barbados Race, one of the most spectacular in history with a total of five records broken, and each team winning their skipper’s weight in rum.

Racing was over staggered starts commencing at 0700 with a good mix of yachts ranging from Classics including the stunning duo – The Blue Peter and Galatea – Ruth, the locally built 33m schooner, and a competitive group of smaller boats including three J/24s. However, the stars of the show that set off last and raced 60nms round the island neck and neck were undoubtedly the two world-class MOD70s – MS Barbados Concise 10, skippered by Ned Collier Wakefield, and Phaedo3 co skippered by Lloyd Thornburg and Brian Thompson. They promised to thrill, and indeed they did.

Right from the start in the 20+kt breeze, there was no stopping these powerful beasts as they took off from the line in Carlisle Bay and circumnavigated the island in the fastest ever speeds. Like predators, they jostled for dominance all the way round the course and ended their battle with MS Barbados Concise 10 claiming victory by just 12 seconds. They completed the course in a staggering 2 hours, 37 minutes, 38 seconds, shaving under two hours off the previous Multihull record.

An elated Collier Wakefield celebrating back on shore, commented: “Racing two MOD70s round the island, essentially match racing was just awesome. It is something we have been working so hard for, and really putting in the hours so to get the record is absolutely amazing.”

After the a good start in a building breeze the two teams enjoyed an exciting broad reach up the west coast but MS Barbados Concise 10 was hit by a big gust, which allowed Team Phaedo3 to slip into the lead.

Collier Wakefield continued: “We were right on our ear and had to ease the sheet. But because, we knew the North Point was the most crucial part of the race, we were up there at 7am practicing this morning. We had tested it out and knew we could cut up inside them at the Point. By doing so we took the advantage and, once ahead it was a case of just keeping cover. But with 22kts of wind and 37kts of boat speed flying a hull downwind, it was full on all the way.”

Lloyd Thornburg co skipper of Phaedo3 added: “It was a great race but after sailing 60 miles flat out it was a tiring one. Well done MS Barbados Concise 10.”

Another great record-breaking achievement came fromlocal sailor, Trevor Hunte, who not only smashed the Windsurfer record he set in 2014 by an impressive 2 hour, 41 minute margin but also led the entire fleet all the way round the course to take line honours. He completed the course in 5 hours, 34 minutes, 16 seconds. He scooted round the island on his Phantom Batwing 377 raceboard and RS:X rig and beat fellow windsurfer, Frenchman Fabrice Cornic, on a Fanatic.

A slightly shattered, but delighted Hunte as he stepped ashore commented: “Wow, I can’t believe I did that. I am elated. Despite not seeing anyone because I led all the way, it was far from boring. The wind got up to 25kts or more between Holetown and Speightstown on the west coast. It was flat out doing 20kts on the beam. Lots of scary moments, and North Point was ridiculous because the waves were so big I could barely tack. No place for the feint-hearted, that’s for sure.”

Because the race, organised by Barbados Cruising Club in association with Barbados Tourism Marketing Inc, and Mount Gay, traditionally takes place on a public holiday to celebrate Errol Barrow Day, and is the headline event of the annual Mount Gay Round Barbados Race Series, it was no surprise that this important sporting event attracted crowds of spectators.

Locals and holidaymakers, not only headed to the south of the island to hub of the event at Barbados Cruising Club, and Barbados Yacht Club to relax in the sun and watch the starts and finishes, but supporters also followed the race by car, stopping off at key vantage points round the coast, including the North Point, historically the most challenging part of the race.

Sailing a J/24 round the notorious North Point is a challenge, but one that Team College Funds took in their stride. Skippered by Laser sailor Jason Tindale (25) and crewed by a team of youth sailors, they were once again noted for their impressive performance. They sailed a tactically good race, completed the course in 8 hours, 37 minutes, 26 second, and were delighted to have broken the record they established last year, by 18 minutes.

Tindale commented: “We are so happy to have skimmed some time off last year. But I have to say last year was a walk in the park compared to this one. We had about 22kts of wind with a three-metre swell off North Point, which is not comfortable on a J/24 but we got through it. The racing was great and we particularly enjoyed out battle with Whistler [J/105], which got a bit hairy rounding Needhams Point towards the finish. Now looking forward to collecting our hoard of rum!”

Equally impressive was the single-handed record, broken by fellow J/24 sailor Cecil Lecrenay on Bunga-Bunga. He completed the course in 9 hours, 46 minutes, 42 seconds.

Dave Staples and the Williams Industries Inc. team on the TP52 Conviction had a bit of a rodeo start when they launched their kite off the line, but once settled and were able to gain control to bear off, they sailed like demons, and completed the course in 5 hours, 34 minutes, 16 seconds, which meant they were able to defend the 60ft and Under Monohull Round Barbados record they broke last year.

The Mount Gay Round Barbados Race Series gala prizegiving party and dinner to mark the end of the 2016 80th anniversary event, takes place tomorrow evening at the Beach House on the west coast of the island.