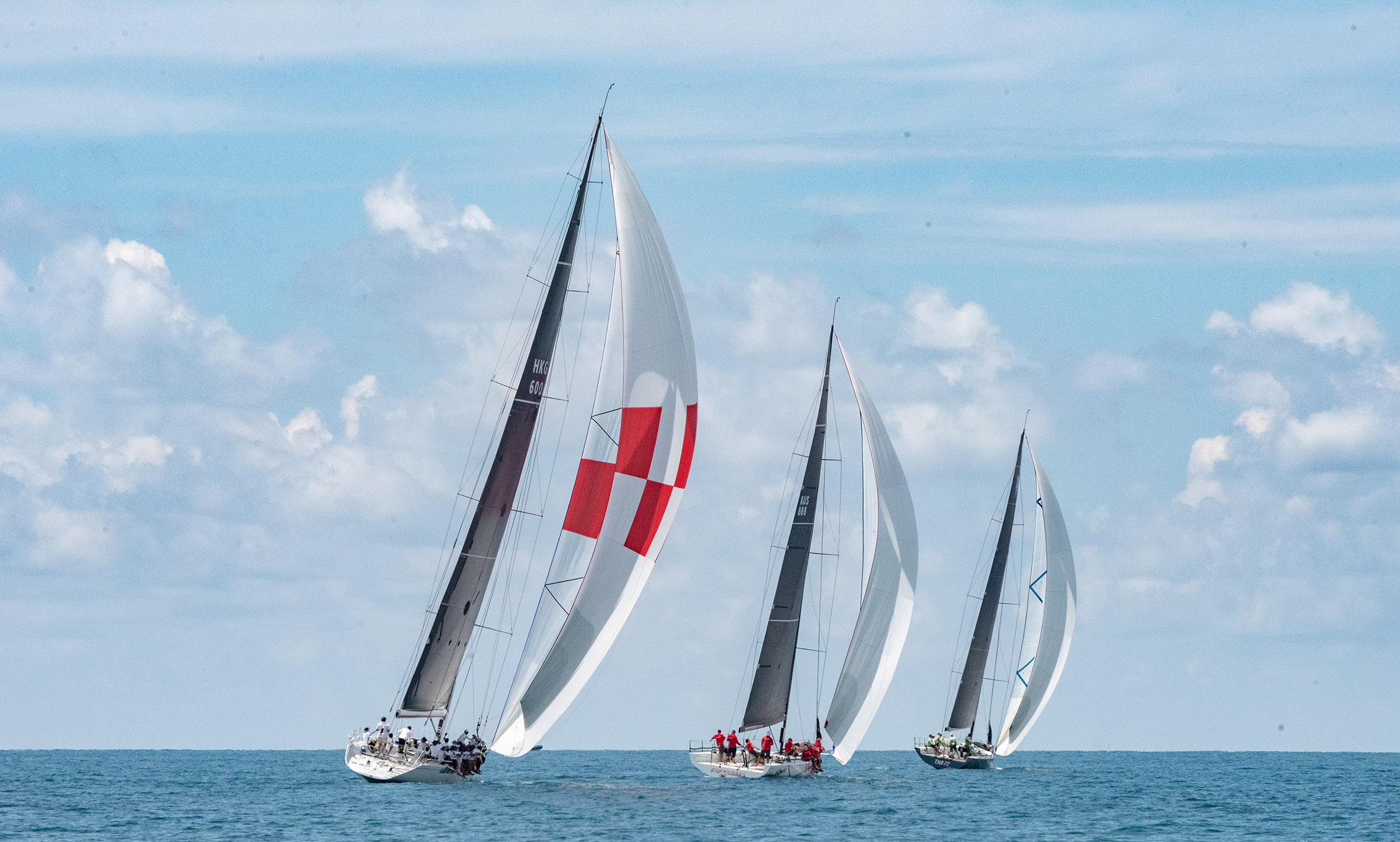 IRC Zero led by THA72 in the final race

Samui, Thailand: Coming into the final day, just 0.5 points separated the top two in IRC Zero with THA72 having the edge over Team Hollywood (AUS) – and one mistake, one bad call could decide the Samui Regatta.

Looking through the scoresheet, the story for the entire class is one of close racing: all six entries have made it onto the podium during the regatta; four have won at least one race; and in Race 5 Jelik (HKG) and THA72 actually tied on corrected time. It doesn't get much closer than that!

Needing to win today's races, the pressure was on Team Hollywood.

THA72 got off to the worst possible start at the back of the pack while Team Hollywood screamed off the line and led THA2 up the first leg, with Jelik and Zannekin (HKG) also in the mix.

All changed on the downwind leg and the next leg upwind as THA72, with Noppakao Poonpat back at the helm after missing yesterday's races, hauled places back and passed all in front to take the lead and sail a clean race to the finish. First across the line and a win on corrected time was the perfect outcome for THA72.

Elsewhere in the class, Zannekin (HKG) got the better of Freefire (HKG) to finish third and fourth respectively, while Jelik corrected out in fifth.

With clouds sitting over the shoreline sucking away the breeze, the course area was beginning to look a lot like a lake, forcing the Race Officer's hand. With nothing on the horizon, the decision was made at 12:45 that there would be no more racing at the 2019 Samui Regatta.

With that decision, the series results stand and at the end of eight races for IRC Zero, Kevin and Tom Whitcraft's THA72 are winners of the 2019 Samui Regatta – their fourth consecutive win and a new record.

Despite having sealed the win yesterday, Mandrake III (HKG) was back on the course today. A final race win was fitting for the unbeaten Mandrake III giving them seven wins from seven races and defending their title in the process.

Another second place for Fujin (AUS) was enough for them to claim second overall, while a third place for Tenacious (AUS) ensured they held off the charge by Over Here (THA), who had to settle for fourth overall.

A shortened course for the Premier boats appeared to open a chink in the armor of series-leaders Bella Uno (MAS) who, having won all races coming into the final day, had to settle for a second place finish in the last race of the series.

It wasn't enough, however, to change the overall outcome as they comfortably won the series. Meanwhile, Lawana (THA) and Moonblue 2 (HKG) have enjoyed some close racing this week, and Lawana's win today – their first in the series – gave them the edge, finishing in second place three points ahead of Moonblue 2 in third.

The Open 60, Scallywag Fuku Bld 60 (HKG), left the rest of the NHC Premier Open Division in their wake, finishing almost 50 minutes ahead of the next boat and correcting out for a win by 20 minutes. This bumped them up to second place tied with Lawana. Scallywag Fuku Bld 60 claimed second overall due to their win the final race.

Damage to SailQuest Hi Jinks (USA) during yesterday's races meant they did not start today, leaving the final day to be a two-boat shoot out in IRC Cruising. A win in the final race for MoonShadow2 (THA) makes it their second in the series but it just wasn't enough. They had to settle for second overall, just one point behind class winners Graffiti (THA) who was competing for the first time in the regatta under the new ownership of Andre Den Braven.

Samui Regatta brings to a close a long season of yacht racing in the region and the AsianYachting Grand Prix 2018/19, with the awarding of the AYGP Skipper of the Year and AYGP Yacht of the Year. This year's winners of the “hardest sports trophy to win in Asia” were Ray Roberts and Team Hollywood – their fourth win in the championship's 17 year history.

The new final night award dinner and presentations format was held at Chaweng Lake Area where competitors and regatta friends celebrated a successful 18th Samui Regatta. Dates have already been set for next year: 23 to 30 May, 2020 at Synergy Samui Resort.

Top three finishers in each class:

Full results are available at http://www.samuiregatta.com/on-the-water/results2019