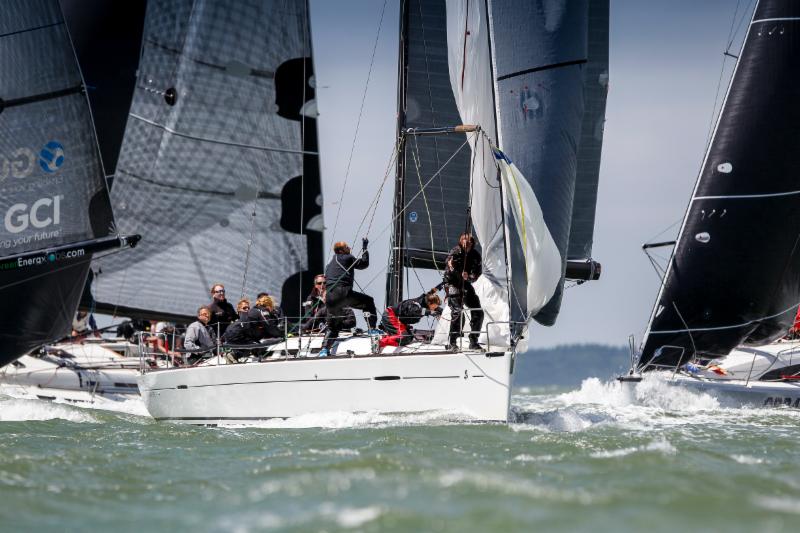 The mix of inshore and offshore races makes the IRC Europeans attractive to European entries like Frans & Carla Rodenburg's First 40 Elke from the Netherlands © Paul Wyeth/pwpictures.com.

22/03/2018
Following its debut as part of Cork Week in 2016 and a stand-alone event held in Marseille in 2017, the IRC European Championship this year will take place out of one of its spiritual homes. Coming to Cowes for the third edition and for the first time in the UK, a record-sized fleet will compete in the 2018 IRC European Championship. It will be one of the most prestigious regattas ever run for IRC, the rating rule created and managed jointly by the Royal Ocean Racing Club and the Union Course au Large in France.
53 boats took part in the south of France in 2017 and the fleet is expected to top 80 boats this year. Racing will be held over Saturday 9 to Saturday 16 June, run by the RORC with Stuart Childerley presiding as PRO.
The event is open to yachts with IRC TCCs of 0.995-1.270. This equates to Sun Fast 3200, X34s, HOD35 at the smaller end up to FAST 40+s at the top. The fleet will be split into classes, but at the end of the week a single IRC European Champion will be crowned. Last year's winner was the St Tropez-based JPK 10.10 Expresso 2 skippered by Guy Claeys, but perhaps it could be third time lucky for the big boats?
Already FAST40+ yachts including James Neville's Ino XXX and Mike Bartholomew's Tokoloshe have signed up for the event. RORC Admiral Andrew McIrvine and his heavily campaigned First 40, La Réponse will also be on the start line: “The IRC Europeans are completely different to the IRC Nationals because the Nationals have no offshore element, so the Europeans will be a much more intense competition than we normally get. It should make it more attractive to overseas entries especially from France, Belgium, Holland and as far away as the Baltic and will support IRC racing in those areas.”
The race format for the IRC Europeans will be a challenging mix of inshores and offshores – similar to that used previously for Commodores' Cups. It will comprise up to 10 inshore races (including windward-leewards, round the cans, some reaching starts, etc), a race around the Isle of Wight (carrying a 1.5x points coefficient) and a 150 nautical mile/30-36 hour offshore race (set in the central Channel to suit the wind direction and strength and coming with a 2x coefficient).
Strong entries are already being fielded by the Netherlands, Denmark and the USA. A strong turn-out is also anticipated from French, given that boats from the south side of the Channel have dominated so many of the RORC's major offshores recently, not only winning the last three Rolex Fastnet Races outright but having the majority of finishers in the top 10 in each too.
Incorporating the Commodores' Cup
France also has a title to defend as the IRC European Championship will this year incorporate the Commodores' Cup, the RORC's biennial event for three boat teams with amateur crews.
To simplify putting teams together, for 2018 the Commodores' Cup has been fully opened up. Boats must comply with the overall IRC TCC limits for the IRC Europeans, but there are no longer any class restrictions for Commodores' Cup boats, nor a requirement for one to be a 'big boat'. Similarly, teams are no longer have to enter the event as nations via their Member National Authority. Instead teams can decide themselves whether they wish to represent a nation or a region or their yacht club or simply three likeminded friends with boats can get together, regardless of their nationalities.
Any boats entering the IRC Europeans can be part of Commodores' Cup teams, however as the Commodores' Cup is a competition for Corinthian crew, boats entering in this will be limited to having one World Sailing categories Group 3 'professional' aboard. The number of pros on board is unrestricted on boats only entering the IRC Europeans.
Andrew McIrvine's La Réponse will be entering the Commodores' Cup once again with a British team: “The Commodores' Cup style of competition has always been very challenging with continuous pressure through the week. To allow a much bigger fleet in the Europeans as well as the team entries in the Commodores' Cup will make the event much more competitive.”
Chris Stone, Racing Manager of the RORC added: “With the IRC European Championship coming to Cowes for the first time, we are expecting it to be the most significant events ever held for IRC. That will be very exciting. Plus the format provides a great mix of courses with the inshores in the Solent, the race around the Isle of Wight and the longer offshore. With those mixed courses we will certainly see different boats up front.