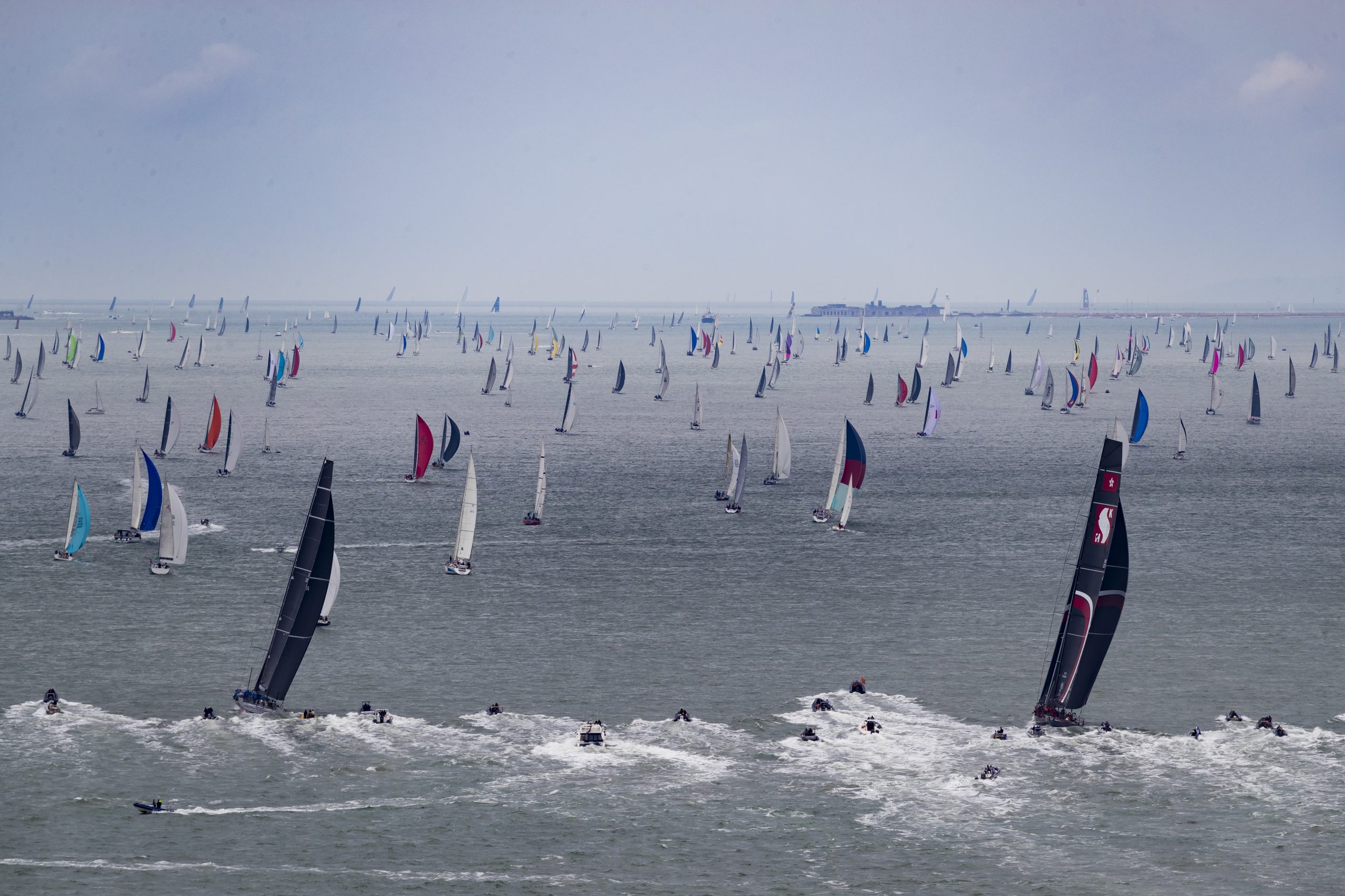 A record fleet of 388 yachts set sail this afternoon from Cowes on the Rolex Fastnet Race, and from the outset, this 48th edition of the Royal Ocean Racing Club's pinnacle event was unusual.

Whereas in most 'normal' Fastnet Races, the giant fleet embarks on a highly tactical race, tacking down the Solent and out into the English Channel, then having to figure out how to make the best of the strong tide.

Instead, today competitors were treated to a south-easterly wind, allowing them to broad reach in a straight line down the western Solent and through the usual bottleneck at Hurst Narrows and on past the Needles.

Leading the charge down the Solent were the massive 32m long Ultim trimarans, Maxi Edmond De Rothschild, skippered by Volvo Ocean Race winners Franck Cammas and Charles Caudrelier leading out of the Solent. This before a brief contretemps with the Shingles Bank allowed through Thomas Coville's brand new Sodebo Ultim 3 and Francois Gabart's MACIF (which America's Cup’s Jimmy Spithill is racing).

While the wind was south-easterly, and forecast to be ultra-light in the lee of the Isle of Wight, in fact there was enough to keep the boats moving down the Solent, assisted by the strong ebb tide.

Among the IMOCA 60s, all being sailed double-handed, there was a split north and south of the Shingles with Kevin Escoffier and Nicolas Lunven on PRB leading the southerly group.

Paralympic sailor, Damien Seguin, and reigning Solitaire du Figaro champion Yoann Richomme, on Groupe Apicil, led the group to the north. This until they too grounded on the Shingles allowing Banque Populaire, Initiatives Coeur and Bureau Vallee 2 past.

A great feature of the IMOCA 60 fleet is that four of the 20 boats have female skippers; three, Sam Davies, Miranda Merron and Pip Hare, British. Pip Hare is racing with the fastest man on the water under sail, Australian, Paul Larsen.

This is only Hare's third major race in her new IMOCA 60. “I was really pleased that we did the Round the Island Race earlier this year because reaching in one of these things up and down the start line can be a little bit scary we've discovered, especially when there are all the other boats in the way!”

Out into Christchurch Bay, Hare was lining up for her first night at sea. “It looks like we'll see the wind transition at around 0200 Sunday morning. The game right now is whoever gets beyond the tidal gate at Start Point really has a chance of getting away. Our current routing shows we'll be to the west of Start Point when the transition comes, so we're just ahead of it at the moment.”

Eighteen Class40s set sail at the same time as the IMOCA 60s and at Hurst Narrows it was Cabinet Z skippered by Cedric de Kervenoael, leading, followed by Imagine, the latest Owen Clarke design, skippered by German Jörg Reichers, and Franco-Englishman Luke Berry on the Mach 3 Lamotte – Module Création also in the mix.

George David's Juan K-designed maxi Rambler 88 led the IRC fleet out of the Solent, ahead of the Dovell 100 SHK Scallywag on which owner Seng Huang Lee is sailing.

“This is my first Fastnet and I am really looking forward to it,” said Lee, who raced the final leg of the last Volvo Ocean Race in which his team competed.

“The 100 is a lot more comfortable than the 65ft! We are aware of what happened in 1979, so this is going to be tough, but it looks like good weather with a strong finish.”

Among the competitive 70 footers, David and Peter Askew's VO70 Wizard was doing a good job in light running conditions, hanging on to the coattails of Sir Peter Ogden's 77ft Jethou and Peter Harrison's Maxi 72 Sorcha leaving the Solent.

However, stars of the show in IRC Z were David Collins' Botin IRC 52 Tala and Eric de Turckheim's Nivelt-Muratet 54 Teasing Machine, which blasted out of the start and were trailing the 70 footers at Hurst Narrows.

At the slower end of IRC Z, the de Graaf family on the Ker 43 Baraka GP was punching above their weight on the mainland side of the Solent. For this year's race they have lured navigator Wouter Verbraak on board.

“We are looking really forward to it. We are one of the smallest boats in IRC Z, so we need to get into clear air and stay in touch with the big boats,” said the elder de Graaf brother Dirk prior to leaving.

“The wind is going to die out tomorrow probably when we're near Plymouth. Then we are expecting a nice, tough reach to the Rock. We have a very fast boat for reaching.”

Similarly slingshoting her way from the Royal Yacht Squadron line in IRC One was Frenchman Dominique Tian's Ker 46 Tonnerre de Glen. As she led out of the Solent, Tor McLaren's MAT 1180 Gallivanter and Frenchman Philippe Frantz's NMD 43 Albator were trailing her, with Albator currently looking strong under IRC.

Exiting the Solent in IRC Two, 2015 winner Géry Trentesaux on board his Rolex Middle Sea winning JPK 11.80 Courrier Recommandé was leading the charge both on the water and under IRC, but with sistership Sunrise, skippered by Tom Kneen, close behind and with Christopher Daniel's J/122E Juno, early season leader of the Performance 40 championship, third on the water.

Among the 84 IRC Three yachts, Neil McGrigor's Boo was the first of the fourteen J/109s to exit the Solent. However, it was the smaller JPK 10.80s that were leading on the water with Arnaud Delamare and Eric Mordret's Dream Pearls having pulled out a small lead and also looking strong under IRC, with Boo second.

Dream Pearls was being chased on the water by the trio of Nicolas Gaumont-Prat's First 40.7 Philosophie IV, David Richards' Sun Fast 3600 Jellyfish and the French JPK 10.80 Raging-bee².

J/109s and JPKs were also leading the charge in the smallest class, IRC Four. At Hurst Narrows, the J/109 Just So, being raced doublehanded by William McGough and Christian Jeffrey, led the 87-strong fleet.

McGough and Jeffrey are both Corinthian sailors in their 30s and this is their first season racing in IRC Two-Handed. Just So was ahead of Francois Moriceau's JPK 10.10 Mary and perennial class winner, Noel Racine's Foggy Dew, another JPK 10.10.

Sadly, Gipsy Moth IV had to postpone her start due to engine problems. However, the team led by Richard Chalmers managed to resolve the issue and restarted this evening.

As they cleared the Needles, the Greig City Academy crew on Scaramouche reported that 13-year old Kai Hockley was on the helm. “Everything is okay at the moment but we've just had a bit of drama when we blew out one of the spinnakers, but we got the other one up. We managed to recover the halyard from the top which is quite good news.”

This evening the leaders will be tackling a transition zone which they will have to cross before reaching the new south-westerly breeze. This could prove the defining moment of the race for many.