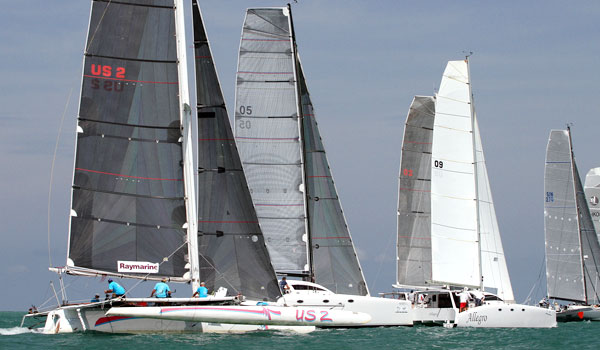 20/07/2017
Last minute entries see the 2017 Cape Panwa Hotel Phuket Raceweek fleet reach 41 boats competing across seven classes including the regatta's largest multihull fleet ever.
The monohulls will compete across three classes – IRC 1, IRC II and Cruising – with 17 boats from around the region taking part including a number of new comers. Five closely-matched “40-footers” will be up against Ray Roberts' TP52 Team Hollywood, the defending champion, while in IRC II Raceweek first-timers and charter teams will be taking on the local knowledge of Niels Degenkolw's Phoenix and Mike Downard's Krabi Boat Lagoon Piccolo.
Racing under NHC, the Cruising class is a mixed big with Ian Kennedy and crew on the 54-foot Swan Who Dares Wins racing here for the first time against regulars BeauX Esprits, Lady Bubbly, Linda and Kantus Bride.
24 multihulls will be on the race course – the largest multihull fleet ever – competing in four classes. The largest of the classes, Multihull Racing, sees six catamarans from the Asia Catamarans yard up against three others making for a tough nine boat class.
Introduced for the first time this year is the Multihull Cruising class which sees three boats, including the return of local-build and past winner, Davinci.
Two one-design multihull classes include the Firefly 850's, totalling six entries and five Corsair trimarans racing in the Pulse 600 class. Expect some close racing amongst these pocket-rockets.
Up to 500 sailors from more than 25 countries will be competing at the 14th Cape Panwa Hotel Phuket Raceweek hosted at Cape Panwa Hotel.