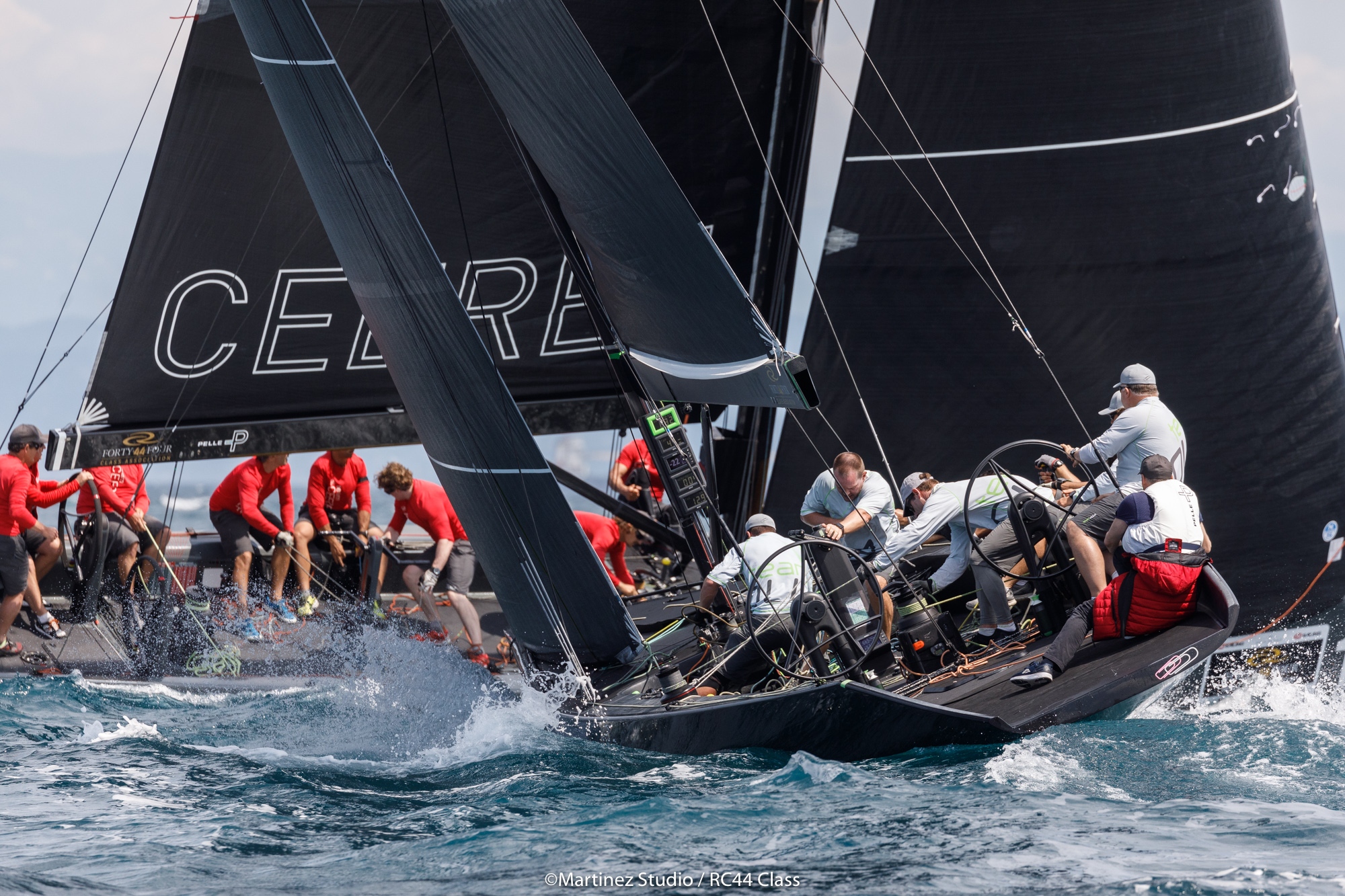 Slovenia continued to deliver on day two of the RC44 Portoroz Cup and with another light forecast; competitors and the race committee were relieved to arrive in Marina Portoroz this morning to find a solid north-easterly.

Anticipating that this welcome situation might not last, PRO Peter Reggio coaxed crews off the dock and got the first race underway 20 minutes early. In 12 knots on a lumpy sea, Nico Poons and Charisma claimed the first race, showing a repeat of the form that won the Monaco-based Dutchman’s team the RC44 Calero Marinas Cup in March.

“We had a good start – that makes all the difference especially in light weather,” explained Poons. Being left on the first beat also paid, said tactician Ray Davies: “We got better shifts. Then we came into the top mark from the left and the group ahead of us started fighting with each other and we wiggled through. Then we got away.”

There was a short pause afterwards to effect repairs. Prior to the start Aleph Racing had holed Team Nika’s transom with her bow. Both continued racing, but, as the Russian team’s tactician America’s Cup skipper Dean Barker, explained: “We salvaged a third, but the boat was filling up with water in the scoop.

“A big bit of carbon peeled off and was just stuck down, so every time we were on port we were really slow. We have more to work for tomorrow now…”

The most impressive victory today came from Chris Bake’s Team Aqua in race two. Winning the pin, they benefitted supremely out on the left side. Coming in on the port layline, Team Aqua rounded the top mark 80m ahead – the biggest lead seen recently in RC44 racing. Team Aqua became the first boat to claim two bullets here in Slovenia.

“The boat is going well, the boys have it set up well and it feels like we have a bit of pace,” said Bake, who is feeling some nostalgia for the venue. “The first time I sailed a RC44 was here…!”

As to their phenomenal win, tactician Cameron Appleton explained of that first beat: “We had enough separation on CEEREF and came straight out of the tack into the left shift – that got stronger and stronger and we got faster and faster and we just stretched from there.”

However, he warned: “We had to finish the race as fast as possible, because we were wondering about the big thunder cloud that was rolling over – there was a lot of thunder and lightning in the distance – we knew that something might happen and we wanted to take all of the chances out of the game.”

The giant rain cloud, complete with lightning display over the land, played havoc with the breeze which disappeared soon after race two. The fleet was sent ashore, but they didn’t stay there long, as an easterly breeze filled in enabling a third race to held in lighter, flat conditions.

In this Igor Lah’s Team CEEREF led around the top mark, but a significant right shift enabled Torbjorn Tornqvist’s Artemis Racing to reach the leeward gate ahead. The race was then shortened at the top mark by which time Team CEEREF had regained the lead.

At this half way stage of the RC44 Portoroz Cup Team CEEREF holds a three point lead overall.
Artemis Racing was joint best scoring boat today. “It was certainly better than yesterday,” said Tornqvist of their 4-3-2, leaving them one of four boats on 27 points.

And why? “We changed the way we were sailing – we analysed it and we just improved all the way around – our speed was okay, our tactics were better and maybe we were lucky too.”

Artemis Racing also has a new tactician in their America’s Cup helmsman and 49er gold medallist Nathan Outteridge, for who even the high performance RC44 is slow compared to his usual rides. As Tornqvist says: “He is so talented he picks it up very quickly. If we continue like this we can win races. At least we closed up today which was very good.”

Outteridge admits: “I’m just trying to get my head around it. It is a game of inches compared to what I’m used to, but I got the hang of it better today. The boats all go the same speed, so if you can be just a click better, it makes a big difference.

“The team knows exactly what to do and how to make the boat go. We had good starts yesterday, but we ended up on the wrong edge. Today our starts weren’t as good, but we got the shifts and our results were better. If we can combine our starts and speed then the second half will be better.”