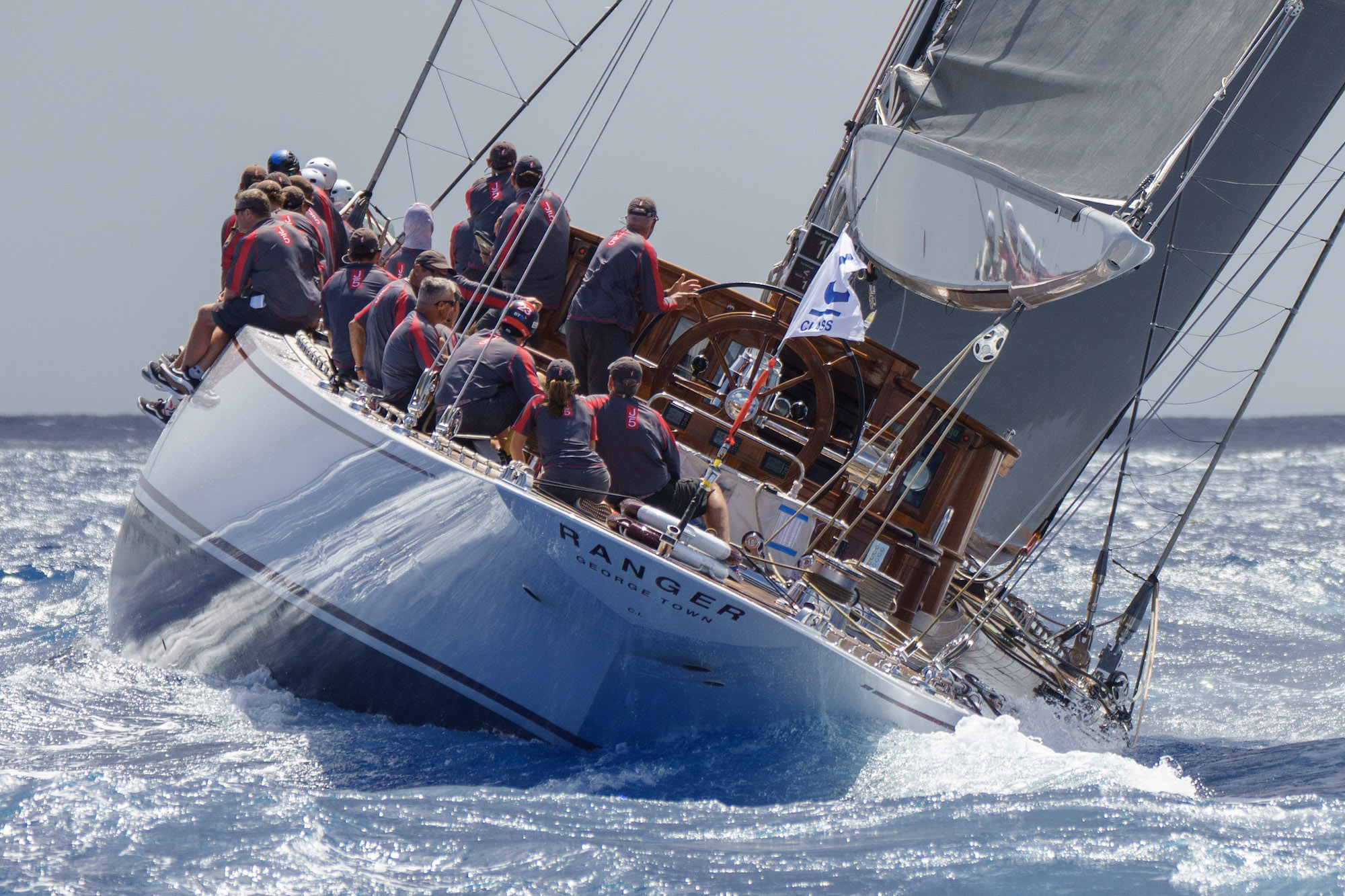 St. Barths, Caribbean: A vastly experienced crew who gelled together perfectly at their first ever J Class regatta proved a winning combination as Ranger clinched the Saint Barth’s Bucket J Class title today after the round the island contest was abandoned mid-way through due to strong winds and big seas.

Under America’s Cup winning skipper-helm Ed Baird, who himself was steering a J Class yacht regatta for the first time, Ranger finished one point clear of Hanuman and Velsheda after four races were sailed.

It is Ranger’s best J Class regatta finish since 2011 when under her original owner and team – they won in Newport. Although in 2016 the boat finished second at Saint Barth’s on countback to Hanuman.

This replica Ranger was built out of steel in Denmark in 2002-3 as the first of the ‘replica’ J’s, constructed to the original Starling Burgess and Olin Stephens lines of Harold Vanderbilt’s ‘Super J’ which won the 1937 America’s Cup 4-0 against Endeavour 2.

At 28.6m Ranger is the longest on the waterline of the trio racing here compared to 27.7m for Velsheda and 26.8m for Hanuman and even after losing six tonnes in refit is the heaviest at 196 tonnes compared to Velsheda’s 180 and 172 tonnes for Hanuman.

After racing for over an hour today on a 25-mile anticlockwise course round the Saint Barth’s islands, the decision was taken to abandon the contest because of the wind and sea conditions which were expected to deteriorate. It was a decision which denied today’s race leader Hanuman their chance to atone for earlier costly misdemeanours and repeat their title success here of 2016 and 2017. It secured the regatta win for the quietly contented Ranger debutant team who missed Race 2 with a winch failure.

“This win is about three years of hard work, long days and nights and a very happy owner,” smiled Greg Sloat, the Ranger project manager. “Between COVID and everything else we wondered at times if we would ever get here and go racing. We are very happy. This win more than anything is down to persistence. With us having the lowest rating we just have to stick in every day and see how it goes. We had very, very little crew issues. Our sets were good, our drops were good but with one winch down. And we had three days training here before the event sailing with the full team. So, it really is a big deal to have come this far this quick.”

“We wanted to put together a crew which got on with the job. It was not about themselves but about the team and so it was not ‘shouty’. We wanted to build a quiet afterguard which got the job done,” Sloat highlights.

And of the updates to the boat, he adds: “We worked a lot on the hydraulics so we have much more winch power than the boat had before. We worked a lot on weight distribution and removed about six tonnes for the same righting moment. The main thing was to get weight forward as Ranger has always sat stern down, so with tankage, removing batteries and a lighter rudder we focused on weight out of the back.”

He believes the best of the updated Ranger is yet to come: “These are not our best conditions. We get slaughtered in the waves because we are so heavy and with the pitching moment. And so I think we can do well in Palma in less swell. It is really hard.”

Hanuman looked to be sailing their best race today and so skipper helm Ken Read was disappointed but paid a warm, welcoming tribute to the Ranger owner and crew.

“We are exceptionally disappointed. That was our race to lose at that stage,” grimaced Read. “But we have come out of the blocks after five years and it is going great but for a couple of mistakes this was our regatta to lose and somehow we did. We like the boat. The team is exceptional. Getting these boats around the race course on a light airs day isn’t easy and so I am very proud of the team, especially how we were doing in today’s conditions.

Finishing third but only on countback, tied on nine points with Hanuman, was Velsheda.

“It is so good to be back fleet racing but I and some of us have missed a couple of years and there was some rust for sure. We owe Ranger a bit of time now, so we have to work hard and do well against them. But we never stop trying to improve and together are a happy crew. The level is up for sure and you cannot make little mistakes, everybody is at a high level,” Velsheda’s tactician Tom Dodson concluded.

The next J Class regatta will be the Palma Superyacht Cup in Mallorca 29 June to July 2 followed by the Maxi Yacht Rolex Cup in Porto Cervo, Sardinia 4-10 September.

For the full results, see: https://bucketregatta.com/results/2022-results/