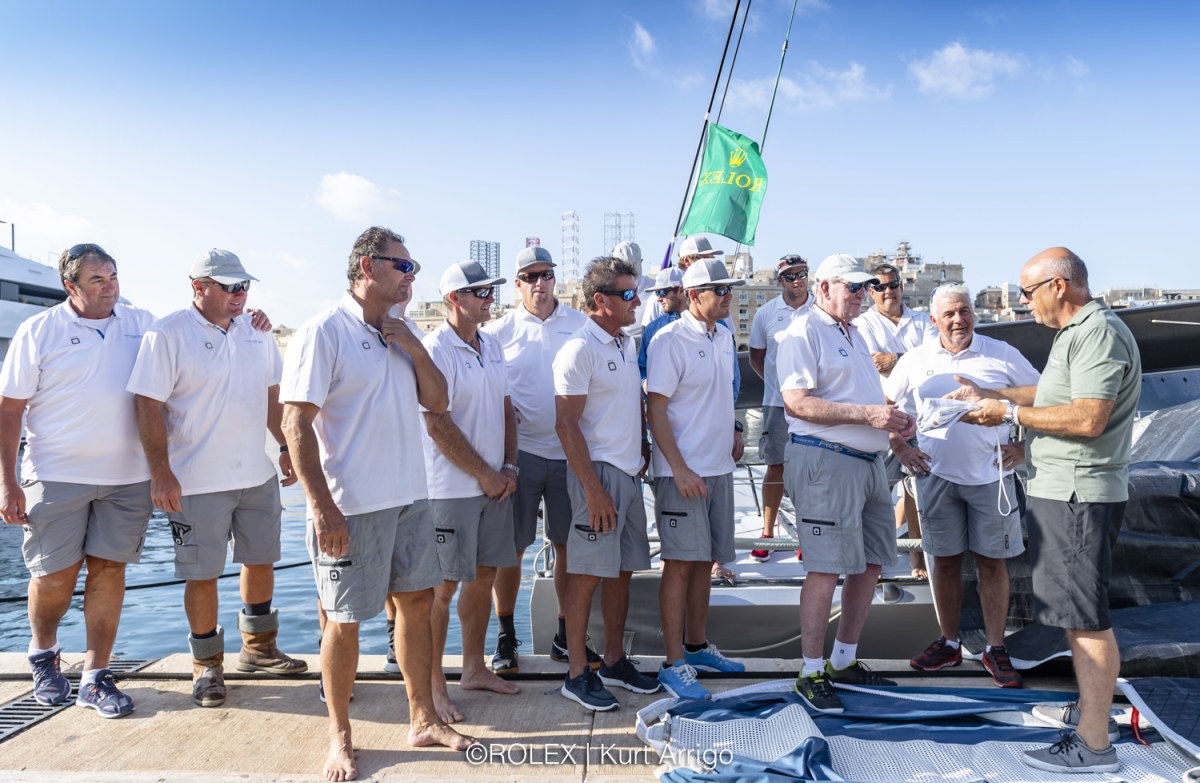 As the 40th Rolex Middle Sea Race entered its fourth day, the south-easterly breeze that has filled the western half of the course has started to play a part in determining the outcome of the 606nm offshore classic. This morning at 08:13 CEST, George David’s American Maxi Rambler was first to cross the finish line. Rambler 88, as she is often referred to, has now taken Line Honours in the Rolex Middle Sea Race five years in a row, a feat unsurpassed in the 50-year history of the race.

Further back on the track, the gates opened late last night for the portion of the fleet previously held up to the east of Palermo; those yachts on the fast track towards Lampedusa, at the southernmost corner of the course. For the remainder, over half of the 113 boats that set off last Saturday from Grand Harbour, the situation north of Sicily is improving slowly, but light winds persist. With Rambler tied up on the dock, the clock is ticking for those with aspirations for the overall win, but the race is far from over.

Yachts now in the south-easterly will be pushing hard all the way to the finish. With the wind expected to increase over the next 24 hours, the yachts will be in for an uncomfortable ride. Once they turn left at Lampedusa, onto the return leg to Malta, they will no longer be on the wind, but the reach home will be a wild one.

Once firmly ashore, this morning, the Rambler crew celebrated in style at the Royal Malta Yacht Club, and with good reason. Securing five consecutive line honours wins in any offshore contest is a serious achievement. Sailing a Maxi yacht hard in race conditions puts everything under immense pressure, from the equipment to the crew, both those that are racing and those on shore. Getting around the racetrack in one piece in each of the past five years is a mark of the commitment, dedication and skill encased within the Rambler programme.

Rambler’s victory in the race to be first home has been so comprehensive this year, that David has a fighting chance of lifting the Rolex Middle Sea Race Trophy for the best corrected time under IRC. As Rambler eased around the northwest corner of the course yesterday morning, everyone else was at a virtual standstill. By the time Rambler rounded Lampedusa, no other monohull had yet passed Favignana. It has been 12 years since David last won this race overall. In 2007, with the 90ft former-Rambler, David achieved a treasured treble of line honours, overall victory and the race record. Having set the bar for the remaining 97 boats racing under IRC at the 2019 race, all David can do now is sit back and wait.

“That's the win for line honours, but we still have competitors on the racecourse. For the overall, we have a shot at it, but we will have to wait and see,” commented the experienced David. “The closest boats are 180 miles behind us now; it all depends on the weather. Too often we have seen the wind build from behind and the smaller boats sail into us with stronger breeze.”

This year’s race was another largely light wind affair for the American crew. The need to do well in such conditions had been addressed over the winter. “Rambler is much improved since a year ago,” said David. “We have a new mast and a new keel: the boat is a tonne and a half lighter, which is a huge difference. That has improved our light wind performance substantially, if not dramatically.”

“This is a great race with great scenery and challenging conditions,” continued David. “It was tough because it was so easy to park up. It was challenging to keep it all together. We take huge satisfaction in taking line honours for the fifth consecutive time, and also protecting the record that we set in 2007.”

The four-time America's Cup winner and tactician on Rambler, Brad Butterworth, spoke about the strategy during the 2019 Rolex Middle Sea Race. “From a tactical point of view this race is hard because there are a lot of parts to it,” he commented. “As the highest-rated boat in a light airs race, every time we stop it is very costly. Getting into the coast on the east of Sicily was hard this year and the exit from the Strait of Messina was also very important.”

With TSS (marine Traffic Separation Schemes), affecting in the strait, boats need to plan carefully their approach to the narrow passage. “We chose the mainland side at Messina, which was good for us,” explained Butterworth. “The boat was going really well in the light air, and we made it out of the strait just as the current turned against us.”

The passage to Stromboli has been historically difficult according to Butterworth, who was delighted that this year the boat did stop. “After Stromboli, we did a really nice job staying offshore and kept in the breeze,” he went on. “By the second morning, we had made it to Trapani. We needed to put in a couple of gybes just to stay in pressure during the transition into the new breeze. Our navigator, Andrea Visintini, did a really great job at this crucial time.”

Speaking of the crew and the Rambler programme, Butterworth expressed his appreciation. “The crew on this boat have been together for a long time, we love this boat. George is fantastic and he sails the boat very well,” said the New Zealander. “It is great to have the opportunity, nothing is left out. This boat is fully optimised and is a potent weapon. If we have won the race overall, it will be a big thing for everybody on the boat. This is a nice race to win line honours, but to win overall would be the icing on the cake.”

All eleven Maltese boats racing have passed Stromboli, the most northerly point. Leading on the water, Lee Satariano's HH42 Artie III is over 40 miles ahead of their nearest Maltese competitor. Artie III is one of the fastest Maltese boats ever to take part in the race and it will be a wild, wet ride on the carbon-fibre flyer racing upwind. Expected to round Lampedusa at around midnight, Artie will then crack sheets onto a screaming reach towards the finish.

Behind Artie, two close battles are raging. The Podesta family racing the First 45 Elusive II are revelling in the upwind conditions and now lead the pack chasing Artie. Elusive is in close company. Sean Borg's Xp44 Xpresso is less than a mile behind, while another Xp44, Xp-act, is a further mile back. The 14-year-old Richard Schultheis is undoubtedly receiving some valuable lessons on his race debut from co-skipper, the highly experienced Timmy Camilleri.

Jamie Sammut's Solaris 42 Unica has also rounded Favigana. Twice in the last three years, Sammut has been forced to retire at this point on the course. Unica is currently nine miles behind Jonathan Gambin's Dufour 44 Ton Ton Laferla Insurance which, in turn, is having a great battle with Ramon Sant Hill & Melle Boersma's Farr 45 Comanche Raider III.

The Gabriella Mifsud skippered J/109, JYS Jan, leads a second flotilla of local boats still battling away on the northern Sicilian coast. In the last 24 hours, the all-women team has pulled out a 14-mile lead over their immediate rivals, J/109 JYS Jarhead. Jonathan Camilleri Bowman's First 40.7 Maltese Falcon II is well-positioned close to the rhumb-line and hoping to beat the two J/109s to Favignana. Impressively, Andrew Agius Delicata & Matthew Gabriele, racing the Reflex 38 Vivace, double-handed are keeping up with their fully crewed Maltese rivals.

15:00 CEST IRC Class Analysis Based on Tracker Positions
The light airs north of Sicily continue to slow the progress of more than half the fleet. Only 46 of the 113-boat fleet have rounded Favignana and started the leg south to Pantelleria and Lampedusa. Spirits remains good. Only a handful of yachts have retired despite the slow going. Blackwater (AUS) lost its mast shortly after passing Trapani, all the crew are safe and well, and the little catamaran has put in at Marsala on the northwestern end of Sicily. The forecast shows the southeasterly that is dominating the Sicily channel to be building over the next 24 hours, while the winds north of Sicily will remain frustratingly light and inconsistent.