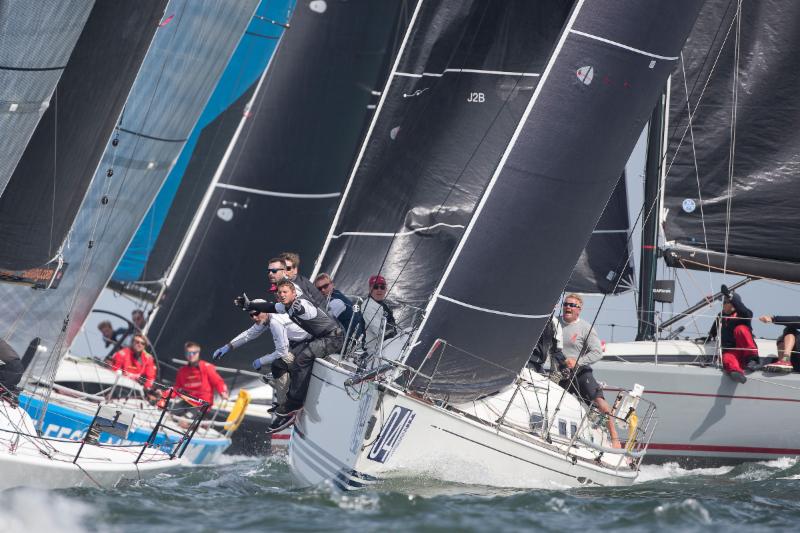 While there's no change at the top of the leaderboards in each of the three classes in The Hague Offshore Sailing Worlds, the fight for the other podium positions remains keen as the points totals tighten up going into tomorrow as the penultimate day of the event. And unlike yesterday's booming southerly with its big waves, today's moderate flat-water conditions in a sunny south westerly helped keep the action tight on both course areas.

Another significance to today's two races is that tomorrow's fifth inshore race will trigger a worst-race discard opportunity, and further compress the results: Those teams who are otherwise strong but may have got unlucky in the short offshore race or one of the inshore races will now have a chance to advance.

In Class A, leader Karl Kwok's Pac 52 Beau Geste (HKG) continued to have close but definitive racing with her runner-up rival, Tilmar Hansen's TP 52 Outsider (GER), and continued to earn bullets for the scoreboard. Given that they have owned this boat for less than one month and are sailing it for the first time here, Hansen is not unhappy in this runner-up position and has a long-term view.

“We are very happy to be back in the game,” said Hansen, whose various boats called Outsider go back to the Admiral's Cup days of the 1980's. “We had a canting keel boat that we enjoyed for offshore sailing, but we were always sailing alone and maybe getting a little rusty on our skills. Competing against a strong team like Beau Geste is great because it is pushing us to be better and breaking this rust. And this racing here is quite close, not only with them but with the smaller boats too – we feel this pressure from both sides and look forward to more racing like this in our future regattas.”

While the results may look stratified, the margins between places are tight – usually around 30 seconds only – as the 52's battle for the 1-2 spots and are extending in their points lead away from the others. So it looks as though the only remaining battleground in the class is for third place.

A newcomer came into this position in the first race of the day, one of two all-amateur Corinthian entries in this class: Ralf Lassig's XP 44 Xenia (GER). After an hour and 15 minutes of racing, at the finish she was only 30 seconds behind the all-pro team on Outsider in corrected time, and a mere 6 seconds ahead of Tea Ekengren-Sauren's Swan 45 Blue Nights…by all measures, close racing indeed.

Then a problem arose for Xenia: Offshore Safety Rule 4.20.3(a). This rule specifies that liferafts on board have to be in a position to be deployed within 15 seconds, and the Jury agreed with the Technical Committee that Xenia's stowage below decks did not fulfill this requirement. So, a 2.5% time penalty was applied to all races sailed thusfar, pushing them back deep into the rankings.

“We're maybe even doing better than expected,” said Poortman. “In third place at the moment, the offshore races went really well. We've made huge progress since the North Sea Regatta, our last event. We're a youth team, with all young and new sailors, racing in a fleet with a lot of professional sailors. I'm a professional too, but I'm only coaching on the boat, not pulling any ropes. And everything is going well for us this week, we've only made a few mistakes today. And if you're playing with the big guys, you want to win. But it's good racing, we're battling for the best of the rest as we call it.”

With the Beau Geste and Outsider so far on the top, Van Uden isn't battling with them anymore. “With the three of us (Hitchhiker and Lady Mariposa) it's a tight battle. At every mark we meet, that's where we learn a lot. In a split second you have to decide what to do and make difficult maneuvers, those are going very good in our team. We hope to get away with this third place, a fifth place would be nice, but we really want that third place now.”

The situation is a little similar in the standings in Class B, where Claus Landmark's Landmark 43 Santa (NOR) continues doing quite well, making few mistakes and harvesting strong results. Landmark's optimization of both the boat with new appendages and a having a strong amateur crew bolstered by pro-level Volvo race talent is paying off with their strong lead in the class standings.

However, their nearest rival is another Landmark 43 from Norway, Torkel Valland's White Shadow, who shared first place points today with Santa in the second race. This crew of amateur sailors with a couple sailmakers are a little more “organic”, being a team that has raced together for a long time and even enjoyed success against Santa closer to home, such as in the Swedish ORC championship in Marstrand earlier this year.

While queuing to be weighed to check their crew weight limit at the measurement controls, various team members offered opinions on how to challenge their rival Vikings: “They are very good, but we can push them harder. We need to just be as good as they are and wait for them to make mistakes. They are beatable, we just need to keep pushing.”

Unlike Class A, White Shadow as runner-up in the standings cannot be comfortable, because their points margin is very thin with the third-placed team: only two points to Tiit Vihul's modified X-41 Olympic (EST). Sharing first place with Santa in the first race today showed their potential, and while they have a 11-point margin on Michael Berghorn's X-41 Halbtrocken 4.0, the discard tomorrow could compress this further.

Recognizing how fierce the competition is among these top contenders, Berghorn said “Hopefully we can stay in the top 5. That's our target for this regatta. When we came here our goal was top 10, so top 5 would be perfect. So far 4th place, so for the moment we are quite satisfied. We do have a lot of X-41's in the fleet, that gives us some good competition, but for us it's really hard to beat the Landmarks. They are fast and have a good rating. But overall we are happy with the competitive fleet over here [at The Hague]. And lighter winds are no problem, though the tidal waters with the currents are tricky for us.”

In Class C the fleet sailed in different winds than the AB course further north: winds were lighter and shiftier, prompting race managers to do many course changes and score the two races using the Low Triple Number ratings. This fleet was also quite aggressive, earning numerous general recalls before the U flag went up to hold them back off the start line.

As in Class B, the class leader is stretching ahead on points on the strength of solid results, with Patrik Forsgren's modified First 36.6 Pro4U over 20 points ahead of Gideon Messink's J/112E J Lance (FRA) who are only one of two teams in the class who have nothing but single-digit scores for all the inshore races – the other is Sandro Montefusco's Italia 9.98 Sugar (EST) who despite these strong scores is out of the top ten in the standings due to a disastrous long offshore race score that cannot be discarded.

“We've been sailing very conservatively until now,” said Messink. “We had a bad result in the second offshore, maybe we could have prevented that one. The rest of the week we've had good results, but that first place is going to be very hard. We don't have the illusion to win this regatta, but we're still going for a podium spot. Tomorrow we'll try and find Team Pro4u more on the water, and sail a bit less conservatively.”

Kai Mares's Italia 9.98 remains third in the standings despite mediocre scores today, and is thus in danger of being overtaken with Aivar Tuulberg's Cossutti 35 Katariina II lurking only ½ point back. Katariina helmsman Lorenzo Bodini spoke this morning about the tight competitiveness of racing in this class.

“It is incredible, we are boat for boat around the race course all the time,” he said. “The ratings are much different for us in ORC and IRC, so the differences in results in each system are also different, but the placings are close. So we cannot think about this and just race as hard as we can. This is a custom boat we have been refining and getting to know very well, and I think we are sailing it quite well.”

Two more inshore races are scheduled tomorrow, with the start once again planned for 1100 local time. Forecast weather is roughly the same as today, but shifting to the northeast, so we expect more close racing tomorrow as teams fight for the podium positions in each class.