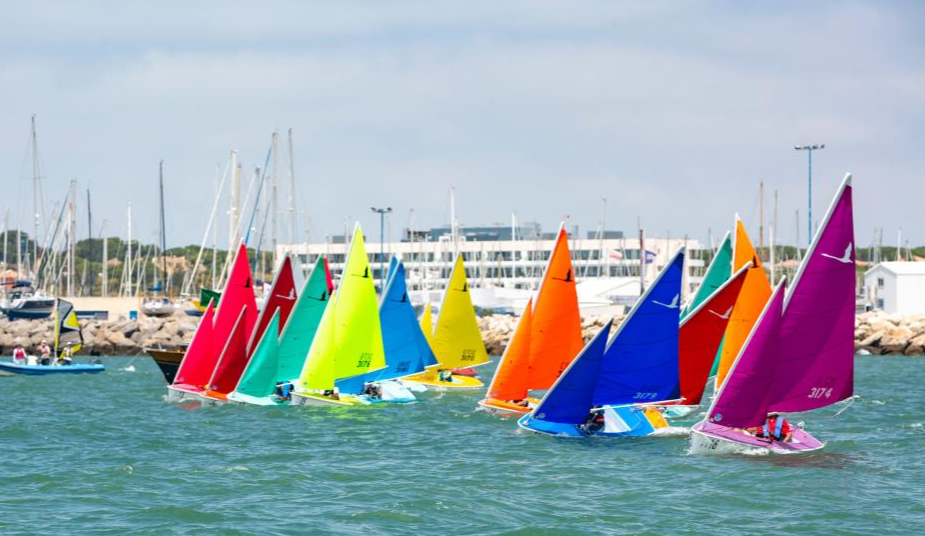 The battle to qualify for the final day of racing intensified on the second day of the 2019 Para World Sailing Championships in El Puerto de Santa María, Cadiz, Spain.

The top 10 of each fleet is starting to take shape, with the best sailors beginning to gain an advantage on the rest of the field.

The Hansa 303 class is the biggest at the Worlds with 36 sailors split into two fleets, so it is a challenge to get into the top 10. However, it is no surprise that the current top two are both previous gold medallists.

Australian Chris Symonds, who took the title in Sheboygan last year, stands in second overall, just a point behind Piotr Cichocki (POL) who got gold in 2017.

Symonds knows what it takes to win the competition and he believes this current crop of Hansa sailors is a talented one: “Piotr is the biggest competition – he was third last year – but his Polish team-mate, Waldemar Wozniak, is also strong,” he said.

“I had some very good racing with Waldemar today and I’ve got a lot of respect for him. Takumi Niwa of Japan is another an excellent sailor, and Rory McKinna from Scotland, who trained with us prior to the event, has started very well. It’s great to see the youth involved in the class,” Symonds said.

With four wins from six races, Symonds is satisfied with his performance so far, and insisted just being out there competing is good enough for him.

“If I’m in the top three I’m happy, but I love sailing no matter where I finish,” he said.

“I’m very lucky to be able to sail – my condition is stable at the moment so I’m making the most of the opportunity. “I feel very privileged to be able to compete so it’s something special for me. “I think I’m sailing very well and the training that I’ve done back home in Australia has put me in good stead.

“We’re only halfway through the regatta. If I can continue performing like I have done so far, I’ll be happy.”

In the Hansa 303 Women’s fleet, yesterday’s leader Miray Ulas (TUR) has slipped into fifth overall after finishing 7,6,10 today. Although evidently disappointed, Ulas was remaining optimistic ahead of the remainder of the championships: “Today was not so good,” she admitted.

“Yesterday was better and I felt so good, but today I feel a little bit upset. “Today the wind was lighter, and I am better in strong winds. “But I am feeling positive about tomorrow; I hope it will be better.”

Asked about her aims for the Championships, she added, “I want to try and win a medal. I last trained one month ago before I came here. There are two Turkish sailors here; me and a male Hansa 303 sailor. We are feeling good about the Championships and we’re enjoying racing.”

Olga Gornaś (POL) is leading the fleet after winning all three races on Day 2.

Italian duo Fabrizio Olmi/Davide Di Maria kept their position at the top of the RS Venture Connect leaderboard, with another three wins and a third in the Yellow fleet today. But hot on their heels are John McRoberts/Scott Lutes (CAN), just one point behind after also winning three races over in the Blue fleet.

The Italians aren’t taking anything for granted, and are keen to stay focused to retain top spot. “Today was very hard; the wind was light and I was very tired at the end of the day,” Olmi said. “We only finished third in our last race, but I think this is good for the Championships.”

“Yesterday we were very happy to start the championships in first place, but it was just the first day,” added Di Maria. “Our target is to finish on the podium and win a medal.

“There is another two days to go to qualify for the finals, so we must concentrate to keep the first position.”

Marco Gualandris/Emiliano Giampietro (ITA) are eight points behind in third, while last year’s winners Will Street/Johnny Currell (GBR) are a point off a top-three position.

Antonio Squizzato (ITA) stays second after claiming another race win, but also picking up a disqualification, which he discards.

Bjørnar Erikstad (NOR) has moved up into third spot, while Peter Eagar (CAN) was today’s other race winner – he is sixth overall.

Full results and all information: http://regatas.clubnauticopuertosherry.com/en