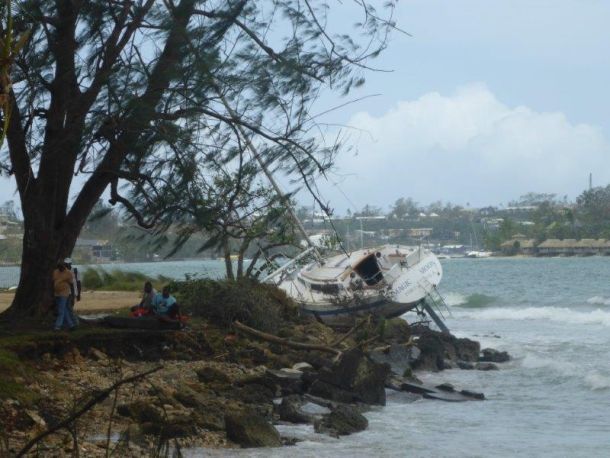 Yacht racing in or to Queensland waters is far from new, the popular Brisbane to Gladstone event being nearly as old as our world famous Sydney Hobart Race, which began late 1945. Since then, many yachting events have accrued along the Queensland coast well before the Whitsunday’s Hamilton Island Race Week dominated. This and older events attract a huge fleet of yachts from all over Australia, the dramatic increase in their numbers raising the question: Where could they possibly go when a cyclone threatens?

The popular notion that the Coral Coast has an abundance of protected anchorages is only true during the winter southeast trade wind season. Once the weather becomes unpredictable, with winds backing and veering, as they do in sudden and prolonged storms, security in winter anchorages disappears. Only in mangroves creeks with stout lines deployed will be reasonable certainty of survival found, anywhere else being very much a matter of luck.

Queensland’s winter racing season is dominated by the southeast trade wind that rarely produces a cyclone, although unseasonal events have happened as discussed later. Broadly speaking, the period from early April to late November is safe from damaging winds and is when the southeast trade wind dominates. Weather forecasting along the coast is great, especially from meteorological stations like Rocky Met whose operators are often willing to prognosticate. As for sailing south on a reliable northerly, it is usually a matter of waiting until after September or, during an el Nino year, late August early September.

Queensland’s countless winter (dry season) anchorages are not suited to weathering destructive winds despite their strongest gusts coming from the southeast before easing as they veer. Sometimes the strongest gusts are from the northeast, which puts any vessels anchored in a winter anchorage on a lee shore. And as for considering reef anchorages in extreme weather, don’t even think about it for they are virtual guarantees of being wrecked and losing your life.

For visitors planning to leave their boat in a Queensland marina for the wet season instead of sailing her home, there are a number of seldom-mentioned challenges that need considering. One is that all berths are often full during summer (the wet season) another is the fact that marinas are not necessarily the secure havens so many sailors presume. In fact, during severe cyclonic conditions they are far more dangerous than secluded mangrove creeks, the latter being unavailable to absentee owners. Further complicating this issue is the fact that the state’s governing body, Marine Safety Queensland, insists that all vessels berthed in marinas be abandoned when winds reach Category 3. This means that at the very time your boat needs you most you are obliged to leave her to the elements and seek accommodation ashore.

This rule goes against the natural instincts of experienced sailors who consider it a denial of their fundamental obligation to care for their boats when most in need. This rule might also conflict with a few marine insurers that expect a vessel to be manned during extreme weather. For clarification, call your insurer.

Conversely, I must admit that the behavior of yachts in a marina during a full-blown cyclone can be very daunting, vessel-to-vessel clashes being possible when substantial waves and extreme gusts cause violent rolling. During such conditions severe spar damage can be caused by masts clashing and entangling with each other across their berths, some yachts actually bouncing out of the water onto their own berth during such melees. This is definitely not a safe working environment, although it has to be said that death or injury were virtually unknown amongst those who remained aboard prior to the abandonment rule. In those days we had the good sense to remain below deck and wear a bash-hat to survive flying debris if needed on deck.

A problem unique to residential marinas is the possibility of management having responded more to the concerns of residents and less to those of sailors. A common concern of non-boat owning residents is the excessive height of piles that are perceived to be aesthetically offensive at low tide. At least one marina has paid the price for obeying this landlubberly-demand with all its berths and their boats lifting off the top of their piles to be thrown against the town houses, ironically owned by the very people who complained.

It can, of course, be argued that pile lengths may never be long enough to cope with the ultimate surge height. Experts in extreme weather behaviour can only base their predictions on historic heights and the geographical features that might reduce or increase them. Realistically, extreme surge heights in some areas can reach four to five metres, with reports of Queensland’s worst cyclone, Mahina in 1899, producing a whopping 10-metre surge. This was in the far north where the strongest wind came from the northeast and produced a unique situation in Ninian Bay whose geography almost certainly encouraged this extraordinary height.

However, you don’t need theoretical or historical extremes to be convinced that the most moderate of storm surges can produce unpredictable and devastating results. As a professional skipper facing a cyclone warning I put my small cargo vessel hard aground in a protected anchorage at high tide and lashed her to the tidal wharf. This was the only option that offered any hope of survival (a vessel on a swing mooring in the same bay carried away and was wrecked). The predicted wind of well over 100 knots arrived at low tide, so it might be expected that my ploy worked perfectly with the vessel high and dry during the cyclone’s peak. But not so: Just before wind gusts peaked the associated surge easily floated her onto a nearby beach after taking large parts of the wharf with her. That particular surge was only around 2.5-metres high.

A cyclonic surge is not the same as a fast moving tsunami; it is a powerful but relatively docile vacuuming up of the sea level beneath a low-pressure system. But docile or not, it cannot be stopped and visitors unfamiliar with tropical cyclones need to consider the surge factor when preparing for a cyclone. Even live-aboard sailors with local knowledge who run their vessels up mangrove creeks must remind themselves that if a surge carries them over high ground, recovery might be impossible.

As touched on earlier, assumptions that cyclones are exclusive to wet seasons (mid-November through March) should not be presumed absolute. Yes, this is the most likely period, especially during late December to late March, but history records many destructive winds occurring in mid winter. The last truly nasty one was in July 1974 and, as those who have sailed along the seaward side of Fraser Island know the rusty hulk on its beach is the remains of the passenger steamer Mahino that blew ashore in the cyclone of July 1934.

Looking further back: On April 2, 1892 winds of 70 knots and 5 inches of rain came from a depression of 29.3 inches that approached out of the Coral Sea from the northeast then ‘U’ turned north along today’s Gold Coast to put the ketch Bellinger ashore on Stradbroke Island and blow a small steamer onto her beam ends in the Brisbane River tipping all her deck cargo overboard. On June 30, 1898, a major cyclone south of Cairns caused the loss of three vessels; then in June 1929 two cyclones ran down the coast from Mackay to record winds of 95 knots at the lighthouse on Cape Capricorn, off Rockhampton. Another severe mid-winter storm struck the south coast in July 1962 flooding rivers, wrecking small boats and causing massive erosion along all beaches from the Gold Coast to Cape Moreton.

As for yacht racing victims, on April 2, 1972 cyclone Emily struck the Brisbane-Gladstone fleet north of Bustard Head, the yacht Istria being lost without a trace and the catamaran Australian Maid going ashore with a loss of two men. In the same blow a trawler went onto Lady Elliot Island with another two men lost. Emily was only slightly out of season yet it caught experienced local racing sailors by surprise.

Despite the rarity of unseasonal cyclones, being caught off-guard is always a possibility, especially with global warming’s changing weather patterns, however cyclone tracking technology has improved to the extent that the odds against an encounter still remain in our favour. But it never hurts to have a few bolt-holes up your sleeve when warnings are issued. Following is a basic roundup of possible anchorages where all-round protection is available during dangerous weather. It starts from where Emily hit at the southern end of the Coral Coast.

Great Sandy Strait: Garrys Anchorage is easily accessed from the south on all tides with good holding. There are numerous other creeks that are snug but most depend on a tide for keelboats to enter.

Pancake Creek: Deep draft needs a high tide to cross its bar of 1.5m LWS to enter the inner, deeper, part of this popular creek, 30 mile southeast of Gladstone.

Gladstone and The Narrows: In this busy harbour Gladstone Marina is mandatory. North of Gladstone, in the southern end of The Narrows there are a few mangrove creeks with good holding in mud. North of The Narrows, best approached through Keppel Bay, there are abundant cyclone anchorages, albeit, a few with poor holding.

Whitsunday Islands: Except for Gulnare, Nara and Macona inlets, all with good holding mud but open to the south, there are no secure cyclone anchorages in this, the most popular area on the Queensland coast, and it needs emphasizing that its main centre, Airlie Beach, commonly becomes a boat graveyard in strong northerlies.

Bowen: Has pile berths and fore and aft moorings making it potentially safer than a marina, depending on circumstances. There is no secure anchorage here.

Hinchinbrook Channel: Has the greatest selection of mangrove creek cyclone havens on the entire east coast of Australia. The mid-channel creeks offer the best protection whilst the island’s fringe creeks, being against lofty Hinchinbrook Island, are subject to more vicious gusts and flash flooding.

Cairns Harbour: Has the next best collection of mangrove creeks but there is an official pecking order involved. The Port Authority must be contacted for an allocation. If Port Douglas is the goal, similar rules apply regarding its mangrove creeks. There are no racing events north of Port Douglas.

General Advice: Mangrove forests produce a filtering effect on the strongest of winds, thus taking much of the sting out of extreme gusts. They offer the ultimate protection from destructive winds and usually compliment it with good holding in mud. Visitors leaving their vessels in marinas during the cyclone season can be confident that management will be as responsible as humanly possible, but once a wind becomes destructive there is very little mere humans can do.