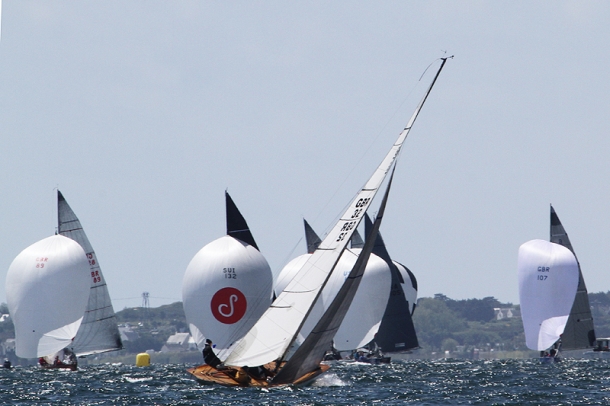 Sadly strong winds stopped play on the second day of the International Six Metre World Championship being hosted by the Société Nautique de La Trinité sur Mer in Southern Brittany. Whilst disappointed not to race, the sailors of the 42-strong fleet from across Europe and North America agreed whole heartedly with the race committee's decision and took the opportunity to work on their boats, enjoy the wonderful cultural and gastronomic delights of the region and of course talk about Six Meters.

One man always in great demand for his technical advice and encyclopedic knowledge of the Meter boats is yacht design legend Ian Howlett. Ian has been involved with the design and developing of many of the Sixes racing here this week so we took the opportunity to sit down with him for a chat about the differences between the Moderns and the Classics and what attracts people to the class.

“Distinguishing between the full keel boats and those with fin and skeg is interesting. The difference really seems to be very small between them. Take a boat like Nancy or Bob Kat II. Bob Kat is still in original Rule 2 form whereas Nancy has a 3rd Rule keel, but the performance differential is really very small, it's less than you would imagine. Which is terrific, it just means that the rule was organised very nicely at the time.

“Looking at the differential between the Moderns and the Classics, if you time the first boats of each division you will find that about 4.5% to 5% is the normal average that I'd expect. But the human beings on board and the rigs and the rest of it can affect the performance much more than 5% so no surprises with that.

“Getting these boats around the racecourse nicely is actually a very demanding business, they are difficult boats to sail and that's what makes them interesting.”

“There's a huge resource of Moderns that aren't currently fully competitive that can be purchased for a very reasonable price and with attention to things like keels and rudders and wings those boats can generally be made competitive. So it's actually not an expensive class to become competitive in if you know what you're doing or have good advice.

“There's a huge difference between a tuned boat and an untuned boat. Success in the class has been notable from crews that have been together for a very long time. Either they're people who've sailed together in other boats or know each other pretty well. It takes a very long time to get the best out of the boats. And its not just boat speed getting them round the course, it's as much about manouvers and how you sail them.

“When we first launched Kirlo in 1981 [unofficial winner of that year's World Cup which was not awarded because of insufficient races when one race was thrown out by the jury on a technicality] we spent a month based on Lake Constancefor the World Cup doing regattas around the lake. From very early days on the water we knew we probably had a little speed edge, but it took us three weeks of regattas, and that was with America's Cup type crew from 12 Metres, to actually learn to get around the course properly and do the right things. We were young and could learn quite fast in those days!

“I think for those coming into the class the big thing is to have the certain knowledge that if it was a sensible nice boat in the beginning it can be made into a fast boat again, given time to “breath” on it.

“Because the scantlings are generous and they're quite heavily built by modern standards it means they last, they don't fall to pieces and that in itself means they have long term value and can always be brought back to the state they should be in.

“It's a nice idea that a boat built in the 1930s has much the same scantling weights as a boat built today, and so any gain in performance made has come about because of advances in design and so on and so forth.

“The big thing in assessing that we have a differential of about 4.5 or 5% is something that in the past you could never measure in boats. I wrote a paper about progress in yacht design back in 1997, trying to get some sort of feel for what sort of progress had really been made. But at that stage you couldn't find out in any class what progress had been made because the old boats would have old sails, they wouldn't have the best crews, they'd have rough bottoms, etc. Now we have Classic boats that have a perfect finish, perfect rigs, perfect sails, money has been spent on them and they have top crews and so you suddenly are able to test genuinely what the progress is, which is terrific. 5% might not sound like much but actually it's a huge number if you assess it in terms of resistance rather than in terms of speed, it's a big number in terms of the naval architecture. But a big proportion of that difference actually will have come with the wing keels introduced in 1987, that's when it really changed. Suddenly we had more stability, more generation of side force.

“They are very remarkable boats to race. When these boats are on full song and you really get it right they have an extraordinary feeling of crispness. In English dinghies you only get that in things like the National 12 or the Merlin Rocket. They have this sharp edge of feel and you just know you are on an edge where you go blisteringly fast. When you are racing the boats there's lots of fun to be had. With the wind going up and down the tacking angles change so dramatically. They change from, in light winds, going through say 120 degrees to, in smooth water in breeze, you might go through 70 degrees, so understanding how the tactics work and where I position myself and all that stuff is a very important part of the game.

“I have another thought about the racing of the boats, which is that sailing in things like the Olympics has tended to move towards the highly physical whereas the cerebral part of sailing is actually fundamental to the Sixes, so this is much more of a thinkers' class of boat, even though they are physically very demanding to sail and make work properly.”

Our thanks to Ian for his time and this fascinating insight into what makes the Sixes so very special.

Coming back to the current Six Meter World Championship the forecast for tomorrow and Thursday is looking better.  Tomorrow will be relatively light and Thursday promises medium winds with sunshine expected on both days. The Race Committee has already published a notice to competitors advising that it may exercise the option to run up to three races tomorrow if conditions permit.

This evening the sailors are attending the International Six Metre Association Annual General Meeting where decisions about future championship venues, technical matters, etc, will be made.

The programme calls for up to eight races and these are currently scheduled to be sailed between now and Thursday, however if eight races have not been completed by Thursday night there will be racing on Friday. The regatta concludes with a Gala Dinner and Prize giving on Friday evening.

Further information, news and results from the regatta will be available from www.6metreworlds.com.