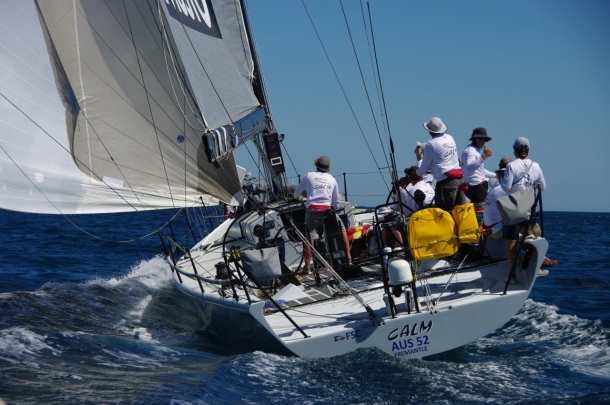 The Farrawa Cup Series concluded with the 67th Bunbury and Return Ocean Race over the weekend of 17-18 January. Royal Freshwater Bay Yacht Club is proud to host the annual event, WA’s oldest blue water event. The 169 nautical mile race is rewarding and challenging and a highlight of the WA offshore season.

A hot day was forecast for Saturday as yachts started north of Fremantle Harbour in a steady 12 knot wind. They looked spectacular off the line and it was a close contest around the day buoy located off Port Beach. Spinnakers flew and the fleet did their best to get around the western beacon and turn south before the wind began to fade.

Spectators had the luxury of watching the race online; all yachts carried tracking devices. The race has come a long way since the days of plane surveillance. In the mid 1960’s considerable media attention meant progress reports were sought after. RFBYC then approached Club member Tally Hobbs who had acquired his pilot’s licence. Accompanied by a spotter, he would fly over the scattered fleet and provide updates both for spectators and safety. This continued until the 1980’s when ship to shore radio’s were enforced.

After sailing in a light shore breeze for a couple of hours, the wind soon turned and increased. Competitors enjoyed the race down to the turning mark boat in Bunbury Harbour. TP52 Calm was the first there but had to get a move on to get back and beat the race record of 18hrs, 57min, 18sec.

There was an amazing sunset that evening as most of the yachts approached the turning point. Although beautiful, it looked like the night would bring light winds. Thankfully the sky soon cleared and brought a stronger south westerly wind which was picked up by the bigger boats who had headed further offshore.

Skipper of Calm, Andrew Harry, commented “We made a plan before the race and stuck to it but with light winds, we didn’t think we’d have a chance at the record. We got to Garden Island and realised we were back in with a chance. We thought we would get close, within minutes, but as we headed back in to the coast the wind shut down and even went north east for a while.” The team finished in 20hrs, 34min, 8sec.

For those who hugged the shore on the way back north, most waited in very little wind during the night.

There was a good competition between the two GP 42’s who raced within sight all the way to the end. Black Betty had fallen behind but picked up some stronger wind further out to sea and caught up to Dirty Deeds near the southern end of Rottnest. Dirty Deeds gybed close in front when then, Black Betty picked up a cray pot. Gary McNally from Black Betty said, “Sailing in to the morning sun made it difficult to see the water and picking up the craypot really slowed us down. We had it caught on the keel and then another around the rudder too”

On Dirty Deeds, their comment was that the gods must have seen them smiling at Black Betty’s misfortune so gave them a craypot to collect too. She managed to keep her lead to the finish with only 3 minutes between them after racing for just over 24 hours.

The Double Handed division was won by Lamotrek. Overall IRC Division Two was won by Giddy Up with Blondie and This Way Up both very close behind, all finishing with a minute of each other on corrected time.

Being a bigger boat certainly had its advantages in this year’s race, they got through in the best of the wind. Overall and in Division One Calm managed a decent win ahead of Dirty Deeds and then Black Betty.

It was a great event with many of the crews already keen to race again next year.