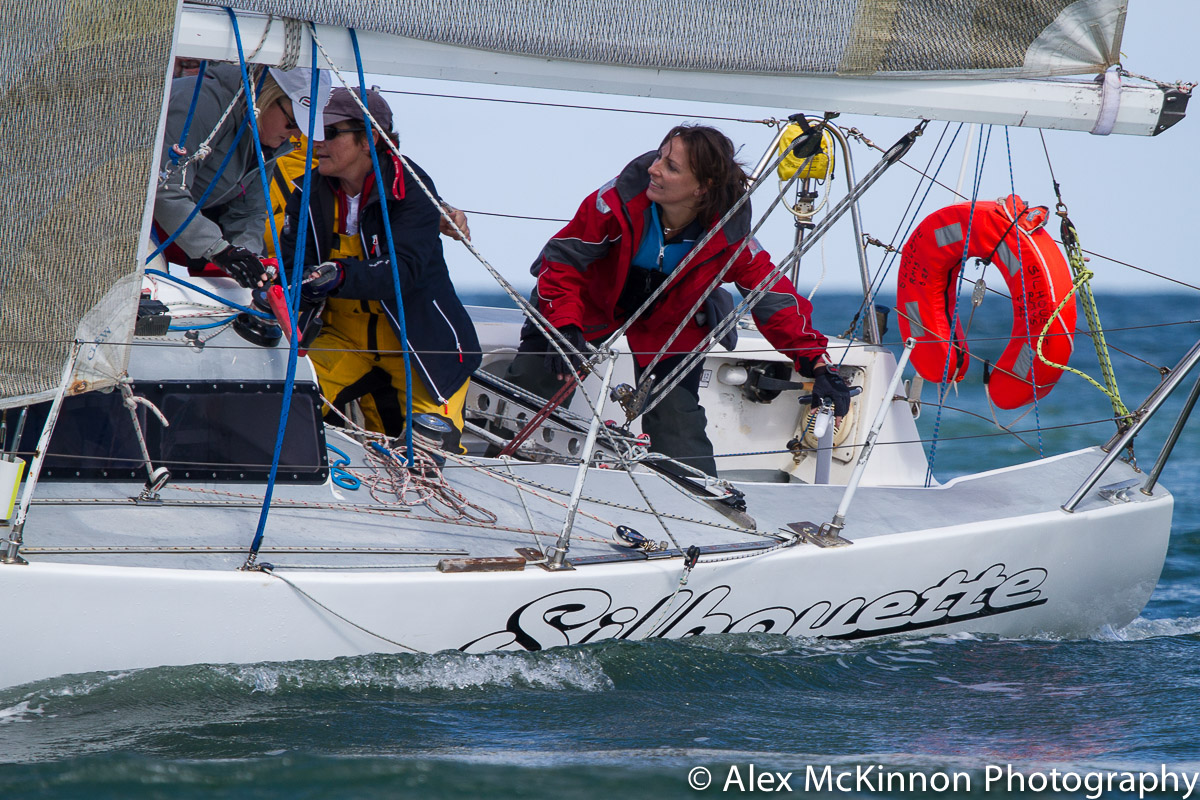 Round four of the 2016 Port Phillip Women’s Championship Series, hosted by Royal Melbourne Yacht Squadron, saw 25 boats hit the start line, yesterday the 17th April, in a generous 10 – 15 knots sou’westerly. With only one more race of the series these participation numbers, combined with the previous three races make this season’s Championship Series the most successful year in Women and Girls in Sailing since it’s initiation in 2013.

This event was originally named the ‘Lady Skippers’ Race’ but in 2005 was renamed the ‘Jennifer Goldsmith Perpetual Trophy’. Despite the name change it’s still retained the original regulations for the Lady Skippers Race whereby the helm must be female and mixed crews are welcome. There were, however, still some all female crews racing including that of Joanne Norbury's 'Executive Decision.'

The course was a two lapper around ‘Royal Melbourne’s’ fixed marks allowing teams to practice their starboard mark roundings, gybes, reaching and tactical upwind sailing. Boat handling skills from all teams were exceptional with all the small tasks such as communication, timing and execution demonstrated as second nature.

25 boats made for a crowded start line putting emphasis on getting a clear lane. Some boats fell behind and had to tack out, while others held on and persisted to the left, splitting the fleet in two. Those who went left gained from going inshore while those who went right needed a strong downwind to close the gap. For the 2016 Jennifer Goldsmith Perpetual Trophy winner, ‘Silhouette’, being persistent and conservative was their game plan. Claire Scanlon, skipper of ‘Silhouette’, explains:

“We were lucky enough to have a clean start but being a 32 footer had to work really hard in keeping up with the tail end of the big boats who wanted to go left. We were able to stick in there and that gave us a strong position for the rest of the race. We also tried to stay away from the traffic but was sure to be aggressive at the marks so we could secure our spot for the next leg.”

Not only did ‘Silhouette’ take out the YV Performance Handicapping division but they also scored 2nd place in AMS to ‘Frenzy.’ ‘Salamander III’ came first in the IRC division with ‘Audacious’ not far behind and for this particular race there was no Non- Spinnaker racers.

The Goldsmith family not only fund the perpetual trophy but they present prizes to the top three winner in the Performance Handicap Division. All entry fees from this event go towards melanoma research.

This event celebrates women in sailing and aims to attract more female skipper and crew into racing. Although not a leg of the Port Phillip Women’s Championship Series, the Australian Women’s Keelboat Regatta shares the same vision. This annual event is in it’s 26th year and often attracts more than 160 participants with this year aiming to smash those numbers. The dates for this event are the 11 -13 June and will also be held at the Royal Melbourne Yacht Squadron. For more information and to register for this event please click here.

The final leg of the 2016 Port Phillip Women’s Championship Series is the annual BLiSS regatta held over two days at the Royal Brighton Yacht Club from the 30 April – 1 May. Practice sessions have been highly successful with over 40 participants coming to each event. For more information and to register for this last race of the season visit the Women and Girls in Sailing website or their Facebook Page. For progressive results on the series click here.