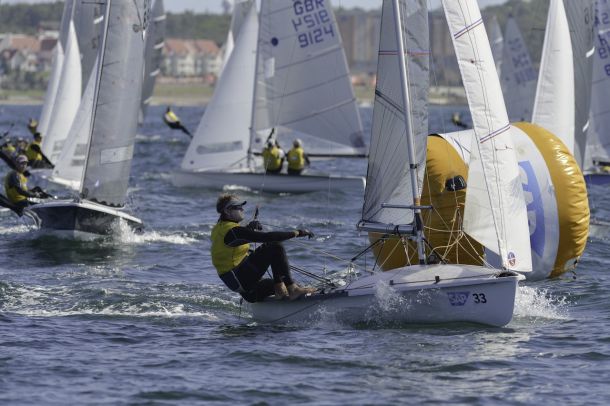 Michael Quirk and Luke Payne moved to within a point of the overall lead after winning race 3 of the SAP 505 World Championships in Port Elizabeth, South Africa.

Algoa Bay brought lighter conditions on Sunday, and after a postponement waiting for the wind to settle, the race got underway in 7 knots of breeze from the south-east. Ted Conrads and Brian Haines from the USA were the pathfinders, and opened up the gate for the fleet as they sailed out to the right-hand side of the course

There were many leaders up the first leg, as the breeze pulsed gently from one side of the course to the other. But by the first turning mark, Quirk and Payne had eked out a small lead, with Conrad and Haines not far behind.

While Quirk extended his lead, fellow Australians Sandy Higgins and Paul Marsh were enjoying a good race in third place. However, with the British/German team of Ian Pinnell/ Johannes Tellen closing in at the final leeward gate, the Aussies were forced off to the unfavoured right-hand gate and lost out to Pinnell on the final beat to the finish.

With a slight increase in the breeze by the final lap, Holt and Smit were making small gains and started to threaten Higgins from the left-hand side of the course. The defending World Champion tacked to leeward of the Australians and it was neck and neck across the finish. While the SAP Sailing Analytics revealed that Higgins had held on to 4th place by a whisker, neither the Aussies nor Americans were sure who had gained the upper hand until they came ashore. Smit commented: “I like to think we got it at the end, but not sure. Those points can count for a lot at the end of the week. I made a couple of errors at the top of the first leg which put us back from the front pack and then we had some catching up to do after that.”

Higgins was pleased to see that Holt and Smit looked a bit more vulnerable in the lighter airs. “It tends to be a bit of a leveller, sailing in the light winds,” said the Adelaide competitor. “But Mike came back strong towards the end of the race, which seems to be a trait of his. Hopefully he gets a couple of bad spots and we get a couple of good ones, and we’ll see what we can do for the rest of the week.”

Closing to just a point of the overall lead after winning today’s race were Michael Quirk and Luke Payne, who only teamed up for the first time this week. “With the Pre-Worlds and the Worlds, we done five races together so far,” said Payne, who finished 2nd at last year’s Worlds with Pete Nicholas. “We’ve been working hard on our downwind speed and it seemed better today, and that could be crucial as we get to the back end of the week.”

Monday’s schedule has the international fleet competing in two races, which will take the SAP 505 World Championships up to the halfway point. With great weather and good winds on the forecast, the real-time tracking and live expert commentary will be following all the day’s action on SAP505Worlds.com.

For video highlights of day 2: