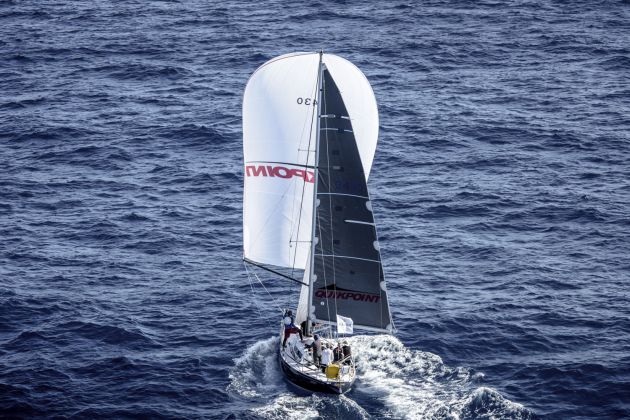 Shane Kearns was in the front seat to win the Rolex Sydney Hobart Yacht Race all throughout yesterday and late in the evening, sailing the smallest and second oldest boat in the fleet. But Mother Nature intervened and Quikpoint Azzurro became the ‘little boat that nearly did’.

Overtaking boats on their way to Tasman Island late yesterday in a strong north-easterly wind tailor-made for the yacht, the small crew of six turned the corner to the Derwent where they met light winds that softened through the night and into this morning.

Instead of winning, or even finishing second overall, the 34 year-old S&S 34, rightly dubbed by her owner as the ‘little boat that could’, Quikpoint Azzurro was relegated to third by the French entry, Courrier Leon, the Valer/JPK 10.80 raced by Gery Trentesaux. The same boat Kearns finished second to in Division 4.

But it didn’t matter, the crowd awaiting her arrival cheered so loudly that every crew member wore mile-wide smiles as she came to dock with another wooden boat she finished 2 minutes 10 seconds behind, Phil Bennett’s John King designed, King Billy.

And Quikpoint Azzurro did win ORCi overall and the Corinthian division. Kearns was elated.

Not bad for the sinking boat Kearns bought on a whim for $23,000 on his credit card, unable to leave the decaying yacht to rot. The same design had safety delivered Jon Sanders, Jesse Martin and Jessica Watson around the world non-stop and unassisted.

Docking this morning, Kearns told the story. “We had a great spinnaker run down the coast. We came around Tasman fine, took the inside course up into a bay with the Code Zero and caught and overtook a whole heap of boats and knew we were in good shape.

“But the Derwent River is a race unto itself. It was so slow and frustrating. Looking back, the storm on the first night was easier than dealing with Storm Bay. We were so frustrated with the indignity of dropping to third place.

“But the boat handled it so well – catching all those boats up – she did so well. Everyone knows the boat now. And I’m so proud of my boat and my crew.

“I owe it all to Hicko (Roger Hickman, Wild Rose, last year’s overall winner) he’s been a worthy opponent for everyone for such a long time.”

“Imagine, all those years of finishing last. Then we won the Gold Coast Race – and now to finish third in the greatest race in the world,” Kearns ended.