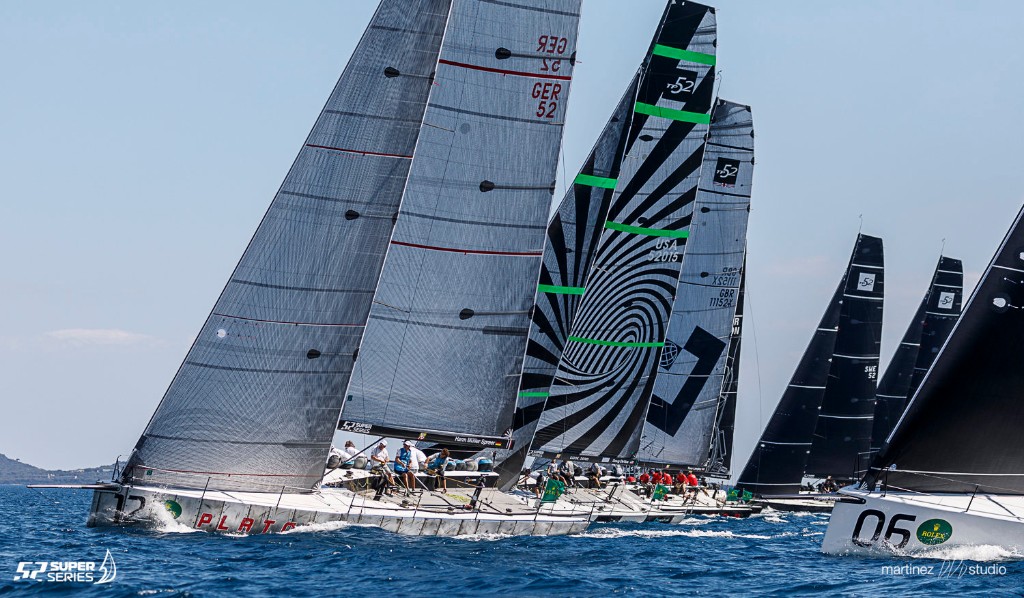 (Tuesday 16th May, Scarlino ) – After a long and challenging day on the waters off Scarlino, Tuscany, Quantum Racing – the defending champions – lead the Rolex TP52 World Championship by virtue of winning the one and only race sailed.

The planned two-race programme was curtailed by a tit-for-tat battle between a promising NE’ly breeze and the usual thermal SW’ly winds. One initial race track, set up in the NE’ly had to be moved when the SW’ly gained supremacy and came in. A race was started and ran through to the second beat before a huge shift and drop in pressure rendered the course unfair.

But when the NE’ly re-established itself, racing finally got under way two hours and 45 minutes after the projected first start, it was in 9-11kts of shifty, hard-to-predict breeze.

Quantum Racing, with Bora Gulari on the helm, made a solid start mid-line with air and time to breath, and so could accelerate quickly while Azzurra were sharp launching from nearer to the committee boat end of the line. They both worked the middle left of the upwind and were able to lead around the first top mark, the slightly better layline of Quantum Racing making the critical difference, gaining the edge thanks to the final ten degree windshift. The 2016 champions lead Azzurra with Sled a very close third and Platoon fourth.

Sled elected to gybe early and paid a small price, dropping back to contend with Platoon who were clearly on the ascendancy. After rounding the leeward gate with just one boat length separating leaders Quantum Racing from Azzurra, a brief tacking match saw the leaders bounce Azzurra out of phase, forcing them to engage with Platoon, who had banked a nice gain on the second upwind. From there, Quantum Racing were able to stay one small step ahead of the fray; Harm Müller-Spreer’s Platoon earning a good second place, with John Kostecki as tactician, while Azzurra just pipped Takashi Okura’s Sled to third place.

Once again, reflecting how tiny differences – a matter of a metre here or there – can make the difference between first and fourth place, the key to Quantum Racing’s early lead was their layline to the top mark, a hairsbreadth better than that of Azzurra.

“We did not execute exactly all the small details that we should have.” Rued Vasco Vascotto, the Azzurra tactician, “I need to be disappointed with some of the little choices I made. But after just the one day, to be third and two points off the lead is not a huge drama. On the first beat the difference was just down the last minute to the mark, the wind went left ten degrees or we were leading the race. We were leading by one or two boat lengths in the middle of the beat, I went to the left layline and maybe tacked just a little, little early. But you have to take the shift when it comes. I am not upset with myself for that. We are old enough to know what the bigger mistakes are and we will do better tomorrow.”

In the challenging, shifty offshore breeze changing gears, responding to the sudden or sometimes subtle changes in wind direction or wind pressure, was keynote. The improvements to the close quarters and starting game of Bora Gulari are already evident, the Moth champion and NACRA 17 Olympian still a relative rookie in the TP52 class compared with the likes of Azzurra skipper-helm, Guillermo Parada, who has been steering since the formative days of Matador nearly ten years ago.

Quantum Racing director Ed Reynolds paid tribute to his team’s perfect start, a meaningful improvement after their fourth in March in Miami:

“It is a really, really difficult race course, but I thought we were going extremely well today. It was exactly what we expected here, puffy, shifty, but our team has always been good at the shifting gears. We have done a lot of work with Bora, and Terry was on top of his game all day. It was such tight racing. That first top mark rounding was so close. But once you got into phase, it was good.”

Platoon delivered an initial endorsement to back tipsters’ predictions that they are the form team most likely to break the World Championship titles stranglehold imposed so far by Quantum Racing, Azzurra and Rán Racing. Second in Key West in January, second in Miami in March, the German-flagged team Platoon built steadily and confidently from fourth to finish second to Quantum Racing.

Platoon’s John Kostekci summarised: “I’m pretty comfortable in the shifty conditions, and we are as a team. We don’t mind it. And I think tomorrow might be a little bit more of the same and then it’s going to change to more onshore breezes. It was tight between the top four boats and a good fun race. It’s tough conditions, and so its tough on everybody. But Harm, our helmsman, did great today, and the trimmers did a great job. We’re still learning and trying to get better every day.”

Wednesday’s schedule of windward-leeward racing is planned to start from 1130hrs CEST.

“We sailed a good solid race. We gave up a couple places on the last run but it’s shifty and you’ve got to sail what you’ve got. It didn’t quite pan out for us but overall we sailed well today, the boat was going well upwind and downwind.”

What do you attribute your consistency to?

“I think the whole package was good. We were happy with the speed both up and downwind, the crew work was flawless today, Mr. Okura was driving the boat really well, and we backed ourselves tactically to sail what we saw. You don’t get all of them right, but today we got a lot more of them right than we got wrong.”

You stayed out of the scrum a bit…

“That helps us. When we see Azzurra and Quantum and Platoon getting a little bit mixed up it was like ‘we need to stay away from that’ and that was our chance. But sometimes it’s just a little bit of where you are at the time. We don’t ever intend to get involved too much.”