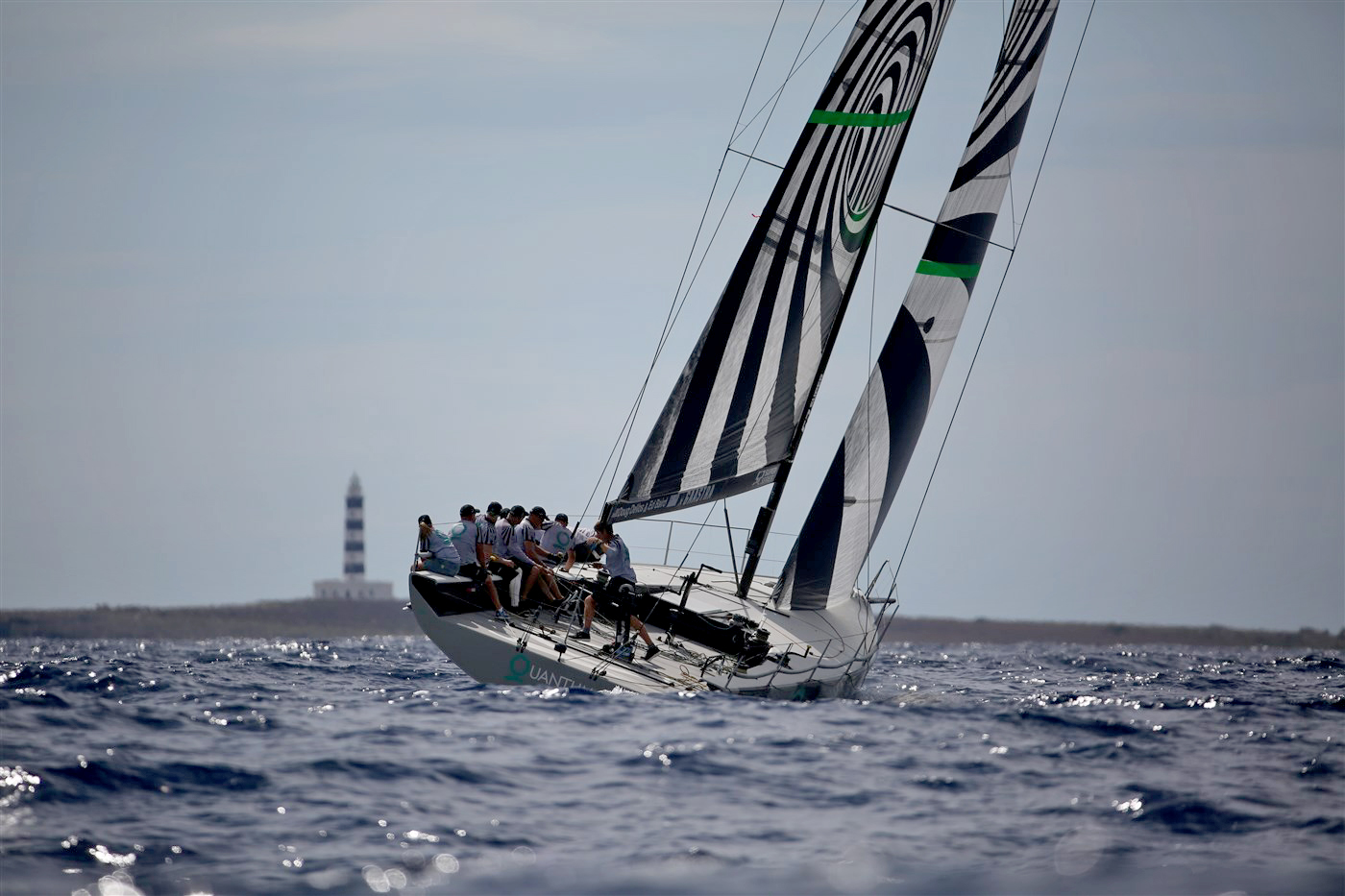 (Thursday 15th September, Menorca) – From a difficult, and at times confusing second day of racing at the 52 World Championship 2016 on the beautiful waters off Menorca, Quantum Racing kept up their amazingly high level of consistency to extend their overall lead to 13 points at the top of the high calibre 12-boat fleet.

After four races, three windward leewards and a 17-mile coastal race, the American-flagged team have finished no worse than second, today recording a first and a second. They were by far the lowest scoring team today, second placed Azzurra being next best with an aggregate eight points for the day.

Wind conditions were lighter than Wednesday’s opening two races. The first windward-leeward saw 10-11kts on the start line. The coastal race that followed – essentially one small windward leeward then a longer beat, a seven mile run and a final windward leg to finish at the entrance to Mahón harbour – started in a light 6-9kts and was marked by a period of lighter airs. It finished in beautiful late afternoon sunshine and a more solid 10-11kts on the line.

Quantum Racing read the vagaries of the first beat of the first race best. There was a fine balance between using the starboard tack lift inshore and the stronger pressure offshore and Terry Hutchinson took the Quantum Racing crew faultlessly on this particular high wire beat. They led Niklas Zennström’s Rán at the top mark.

Of the three boats which were called over early on the start line, Azzurra made a special recovery to fourth at the top mark. While Quantum Racing and Rán held solid at the front in first and second, the second beat saw a right shift which Azzurra got on the outside off, losing four hard earned places to cross in seventh. Beneficiaries of the right shift included Provezza which made third and Peter Harrison’s Sorcha which got fourth.

Platoon led early in the 17-mile coastal race but on the longest leg they held too far offshore, looking for extra pressure perhaps. Harm Müller-Spreer’s crew took a big drop for their mistake. While the gains were inshore, very close to the land where the breeze was accelerating and heading nicely, they dropped back to a painful seventh.

The leading battle all the way around the course was really between Azzurra and Quantum Racing. This time the Italian crews’ defences proved impregnable and they crossed the finish line just under 200 metres ahead of Quantum Racing. Tony Langley’s Gladiator were unlucky to lose third to Takashi Okura’s Sled in an upwind drag race to the line, but Gladiator share the same points tally as fourth-placed Provezza, a notable improvement for the British team so far.

In the overall standings, Quantum Racing are 13pts clear at the top of the standings, Azzurra second and Platoon, 5-7 today, lie third.

“The first race was tough. We got up to third and I went left to control the boats which were fourth and fifth but the wind went for five minutes way to the right, numbers we never saw for the rest of the day, and so that unfortunately cost us. It was unlucky. The second race we were on a nice lift and crossed the fleet with Platoon and then luckily the choices we made were the right ones. But it is a tough race course. It is really, really tough. I think I aged ten years today. We need Quantum Racing to be making mistakes, but they are making a fantastic job. After a year not winning so many races then we have won two in two days. It will be tough to beat them. We are getting faster. But if the worst result they do behind us is second, then that makes it hard.”

“It was hard all the way through the day. But it was exciting all the way through. In the coastal race it was changing all the time. One minute you were looking good and the next you were in the cheap seats. So it was very exciting, tricky and shifty. You had to be where the puffs were otherwise you could from first to fifth or sixth very quickly.

We were looking for good, solid results today. We were not out to win the regatta today and so for example rather than going for first in the second race we were happy with second.

There is a big wind bend all the way round the island. We were all expecting that. But really just when we were expecting that today it stopped happening and there were some left shifts, especially at the top. And then the boats which went offshore on the run paid a penalty.

Mahón is fantastic. It is such a beautiful harbour. It is a bit more chilled out, more relaxed. We are having an amazing time here.”

The 52 World Championship will take place in Mahón, Menorca from 14th-18th September. Racing starts at 12:30 CEST every day, with live coverage for the remainder of the regatta.