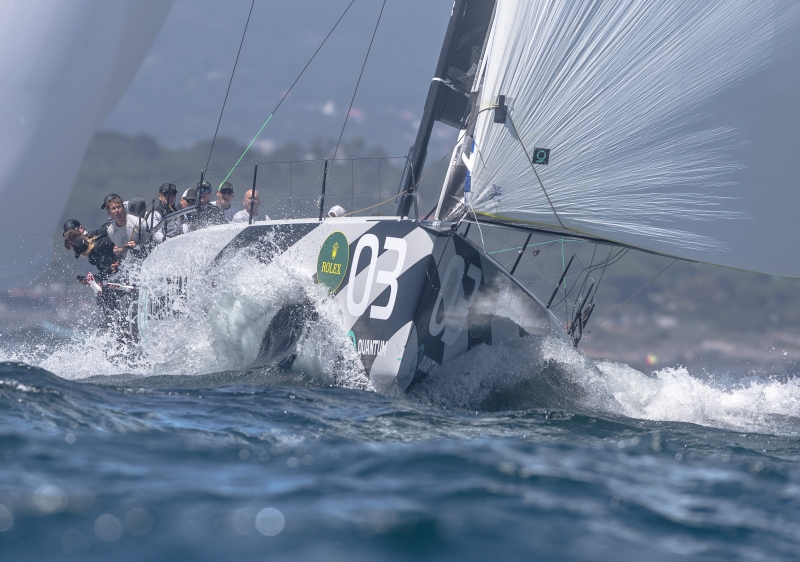 Cascais, 19 July 2018 – The Rolex TP52 World Championship may be the most recent addition to the Rolex yachting portfolio, but it feels just as much a natural fit as any of the events that have featured during the brand’s six-decade-long association with the sport. Taking place this week, from 17 – 21 July, the event is the highlight of the annual 52 SUPER SERIES. The 2018 venue is Cascais, located on the Portuguese Atlantic coast and renowned for big wind, big wave conditions. The first three days of the competition have lived up to the reputation, placing the onus firmly on precision in boat preparation, along with timing and execution during racing. After five races, Quantum Racing from United States leads the nine-boat fleet with a seven-point cushion. Azzurra from Italy and the British-flagged Alegre are tied in second.
download

The classic summer breeze for Cascais is a strong north-westerly wind, around 15 – 20 knots. This wind can drive steep waves, particularly offshore and out of the lee of the land. The first two days of this regatta have delivered some exceptional sailing conditions and, even though the winds diminished on the third day, racing has been spectacular. The TP52, at 15.85 metres (52-feet), is adept in most situations. Fast upwind, punching through any sea; even faster downwind, reaching and surfing on top of the waves. The fleet gathered this year for the world championship features nine new boats and crews fully geared to securing the title. With the heavy presence of America’s Cup and Olympic medal winners in each crew, an unflinching pursuit of excellence is evident throughout the fleet. The pressure to succeed at this grand prix event is tangible.

The three-time Olympic medallist and 2016 Rolex World Sailor of the Year, Santiago Lange, is the tactician on the Italian entry, Azzurra. Lange has raced in the TP52 Class a number of times, but not since 2014. Re-joining at the beginning of this year, he has noticed a big step up in preparation, reliability, skill and commitment: “It has always been a very tight class, but it feels as though the levels have continued to increase. The boats are very sophisticated and the designs are very similar. The shore teams go to incredible lengths to prepare the boats and maintain them after each race. How well you do, depends upon how well you sail.”
download

The teams taking part at the Rolex TP52 World Championship are all at the very top of their chosen discipline. The sailors are skilled, resourceful and knowledgeable. The shore crew confirm the sense that everyone’s approach is dedicated and committed. The management of boat, equipment and personnel is at the level associated with highest tiers of other sports that marry human and mechanical performance. Lessons are continual and victory requires awareness and the ability to keep learning, adapting and perfecting. Five-time Olympic medallist, twice Rolex World Sailor of the Year and Rolex Testimonee, Robert Scheidt is the tactician on the Brazilian entry, Onda. “There is no room for error in any department,” he says.
download

At the halfway stage, it is the professional team on Quantum Racing that is proving consistently strong. With two wins from five races, including today’s 20-nautical mile coastal race, the American crew – led by Terry Hutchinson and Dean Barker – has hardly put a foot wrong. Even today, when their boat’s instruments failed less than 30-minutes into the race, the team was able to demonstrate its talents keeping the boat going fast on instinct and feel.

With nine new boats on the start line, and all the crews performing at the peak of their powers, it is sometimes difficult to see exactly from where the differences in performance stem. Tom Burnham, strategist on Hasso and Tina Plattner’s Phoenix, is a former world champion crew member with Quantum Racing: “All nine boats are brand new, they are all quick and the design differences are small. It is all about who is sailing well and it is down to how well you execute all the little things.”
download

Achieving success is multi-faceted, according to Burnham: “So many pieces have to be absolutely right. It’s like a pyramid. At the base is the boat preparation. This has to be perfect. When things break, you lose and there is just no excuse at this level for breakages. Then it is boat-handling, another area where the teams work hard to eliminate errors. Then you have boat speed – sail design, sail trim. Finally, it is tactics and strategy, the hardest of the lot to get right.”

Mastering the first three layers of the pyramid requires skill and experience, determination and effort. There is very little between the competing boats in these areas. The final layer is perhaps the most elusive when it comes to consistency and accuracy. Each boat races with a navigator, strategist and tactician to spread the decision-making burden and to relieve pressure. And, while Lange insists that “without boat speed you have no chance”, it is equally evident that without good tactics boat speed will never be enough at this level. The quality of individuals filling the decision-making roles on all the competing boats is exceptional, confirming the importance of the tip to the pyramid.

The close competition continues with further racing planned for tomorrow (Friday) and Saturday. Conditions look set to increase the pressure on the crews, with the wind forecast to build, truly testing the best practitioners in the sport. For the overall victor, it will be worth it. As well as being crowned World Champion, the winner of the 2018 Rolex TP52 World Championship will receive a Rolex timepiece, the recognized symbol of achievement in yachting, awarded to the winners of many of sailing’s most prestigious events, including the Rolex Fastnet Race, the Rolex Sydney Hobart Yacht Race and the Maxi Yacht Rolex Cup.