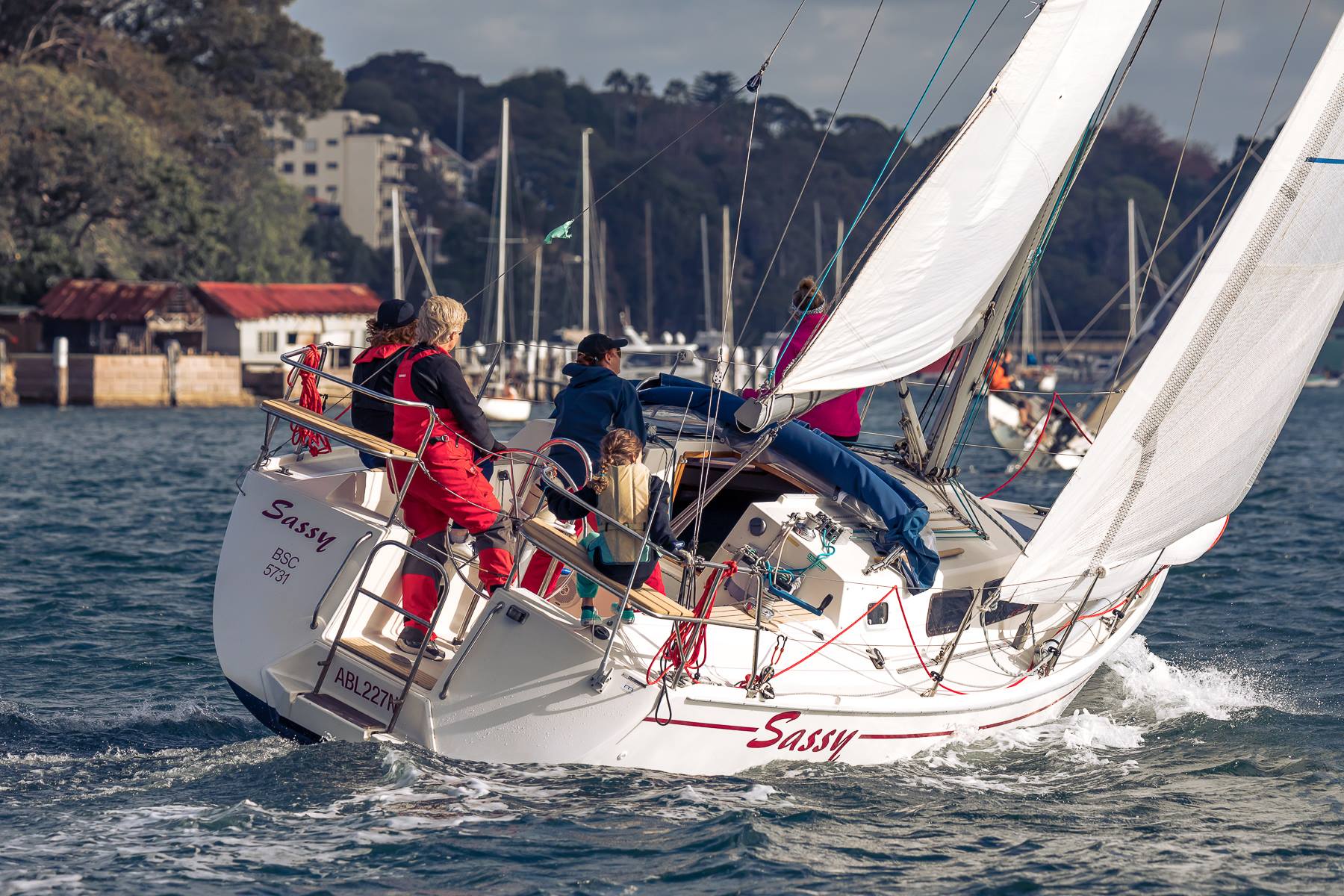 Why do we keep trying (and failing) in getting gender equality in elite sailing?

Last year I sailed my yacht from Sydney to Pittwater. Just the three of us. Myself, one of my regular crew and her 12-year-old daughter.

Within a few minutes on the wheel, that 12-year-old was steering like the yacht was an extension of herself. We were both amazed. Miss 12 also loves dance, so she is busy doing that just now.

A few weeks ago, my grandson, aged 4, got onto the yacht for his second outing. He didn’t want to do anything other than steer. He also took to it easily. He followed directions, concentrating and refusing to give up his position until he literally fell asleep at the wheel. Master 4 also likes his toy cars and cooking – so he is busy doing that now.

Hopefully, both will catch the sailing bug. They are, what I consider to be, naturals on the helm. Yet it will be Master 4 who will have more opportunities if he chooses the life of a professional sailor.

Inclusion for females currently means putting women in any team position other than the helm. 'Media director' or logistics are just some of the 'team positions' women hold. Occasionally they are hired to be navigator or even tactician.

Teams also deflect with clever smokescreen marketing. An example I saw recently was that SailGP put a large picture of Shirley Robertson on the front of an article saying: 'Shirley Robertson interviews Sir Ben Ainslie'. They are being inclusive right? Look! A big picture of Shirley! Who is, by the way, an exceptional sailor and racing commentator.

We know that female sailors can be just as good as male sailors, given the same exposure to the craft and training, so why are they constantly overlooked by teams?

Do just as many females want to compete in racing?

Answer: yes, I believe so. If we give them exactly the same opportunities as males, then we will eventually get a similar number of females as males competing at all levels of sailing, including the elite racing circuit.

There are plenty of mixed teams: the Olympic Nacra catamaran is an example. Despite being crewed by one female and one male, only ten per cent of women are on the helm. Even so, these 50/50 mixed teams will give that important 50/50 opportunity to be trained and selected. 50/50 is the way to go in mixed teams.

Until we allow young females to be in charge, to do all the things that young males do, then we shall always have less women in racing than men. Parents of children need to stop saying things like “you throw like a girl” or “let your brother do that, he is better at it”.

If you ever hear things like that – pull that person up on it.

Female soccer in Australia has taken off – big time. It is now seen as the sport to play when you are in school for both boys and girls.

I was part of the inaugural women’s soccer team at my local club. We were hopeless. The boys of the same age were vastly better because they had been playing since they were six and they had any number of qualified coaches and assistant trainers to really get the best out of them.

Scouts were always looking out for the best male talent and getting them into youth camps. Our coach was a dad.

It is no good to say that we just happen to have a talented bunch of girls. We have always had the talent, but we have never had the training and experience. Now we do. Crowds fill the sidelines and the stadiums (Covid notwithstanding). In the USA and England women’s soccer games regular surpass 30,000 people in the stands.

Women’s Cricket: exactly the same thing has happened. The Women’s T20 final in Melbourne at the beginning of 2020, had 86,174 people in the stands. Good marketing, skilled, entertaining players and parents taking kids to the game helped.

Again, it’s a sport in its own right and the skills are incredible.

In sailing some classes do have men’s series and women’s series: Laser for men and Laser Radial for women. However, the issue with that is the boys will get into a 'men only' sailing mentality when they sail together without females.

Due to the cost of sailing and the sponsorship required, we will not see a female America's Cup anytime soon, so my hope is that 50/50 mixed teams become the norm.

Sail GP thinks it is wonderful and a step in the right direction, to have a new rule which says each boat now must have a female in the team. Women’s invitational camps, selection processes and training are currently taking place.

For the French, Billy Besson is in charge and at the helm. He has significant on and off water input. He was invited to lead the team. Conversely, for the female French winner of the selection trials her prize is the right to stand behind the helmsman to assist with tactics.

Marie Riou was selected by Billy Besson in 2017 because he wanted his Nacra sailing mate with him. Thanks Billy. Marie, your sailing teammate for over five years in the Nacra, got in through the 'Captains Pick' it seems.

New Zealand has chosen two candidates to “be immersed” into the team. After Bermuda one female is dropped (fails) and the 'winner' gets to “join the team”. Nothing mentioned about which male crew member she will be replacing on the boat; hint: she won’t be.

But yay! She is on the team.

Just recently Jimmy Spithill snapped up three of America's Cup American Magic guys for his upcoming SailGP campaign. This happened while several females are in the intensive training and selection camp. Looks like the males don’t have to go through the hoops the females do. The males simply get invited to join.

Even the words are carefully chosen so we think it is all about to happen: “we’re excited to also announce that this week we’ll launch an open process for female athletes to apply to join the team.” Those words actually say – we are about to start to begin to have females apply to join.

They were well-funded but did not have anyone on board who had that America's Cup experience. Dennis Conner and his team, with their vast experience, defeated them 5-15 and became the defender.

The females were doomed to fail because the sponsor thought he was helping by choosing an all-female crew, rather than selecting females and males with talent and experience.

2019: Carolijn Brouwer was selected to be the first ever helm on a challenger for the Netherlands. However, they had to withdraw due to a lack of funding. That would have been amazing, but it did not happen … again.

Let’s hope the funding did not evaporate as soon as sponsors found out a female was on the helm. Did I say that out loud?

Several females are on the current start boat with Iain Murray. Talk about inclusion! There will probably be an article out soon saying “3 females on the start line in the Americas Cup!” So, it looks like the start boat will be the closest females will get to the action, America's Cup style.

Volvo Ocean Race introduced a rule where you could have seven men onboard or seven men and one woman; among other variations as well. In other words, if you have 7 men you can take a woman along for free!

David Witt on Scallywag is rumoured to have said “we’re going with seven guys. I just don’t think the rule is a good fit, and I don’t think the dynamic will work. It’s hard enough to win the race, the last thing we need is to be part of a social experiment.”

Was Witty simply misquoted? No matter; he did not take up the offer of a 'free' female when the race started. Interestingly, later in the race, he did.

SCA , the all-female entry in the previous race, really got us all excited and, despite coming last in most of the legs, came through to win the last one. It took them that long to get the experience on the Volvo 60 in hard, ocean racing conditions.

The experience from that race has propelled many of its crew to become elite professional sailors. They learnt the hard way and learnt together.

Apart from Dee Caffari, not many of them had the experience required to win from the outset. They do now.

The names of crew from SCA keep popping up everywhere. Why? They have experience at elite level because sponsors gave them a chance.

Why do we need to keep giving females a chance? Can’t they just be chosen on talent?

Strength? It is not as big a deal as the males would have you believe but boys would not want to lose their position on the boat to … gasp … a girl!

Yes of course an ironman can out muscle an ironwoman, but he can just as easily get seasick, break an arm or mentally fold. I have seen a grown man crying in the bottom of the boat because they were scared and sick with the storm conditions we were in. I walked over him on my way to the chocolate stash; he was in the fetal position for 12 hours.

The current design of the America's Cup AC75 boat requires grinders who do nothing else other than turn the handles. A couple of crew are not even sailors. They are picked for their strength. Does the direction of sailing have to take this path where sailing 'gorillas' and millions and millions of dollars may equal success? Is that the only pathway for sailing entertainment?

Female sailors are no different and have the same skill set as males once they have that experience and become a normal part of the sail training pathways. Not via well-meaning, but wrong, 'inclusion' camps like SailGP have where it is really just females being looked over by men to see if they can compete with men.

Every time a see a Sabot or 29er go by with a girl at the helm I cheer and I thank the club volunteers. That was so many of us in our youth. I was a Flying Ant sailor.

I only got into the 1987 Sydney Hobart because the boat owner wanted to give females a chance. I saw the advertisement in the paper and tried out.

By the time the race started I was a watch captain and one of four people allowed to helm. Team members should be picked on talent. Teams should quit thinking “let’s give a female a chance”. Talented people pick themselves and, of course, everyone undertakes training.

We should all help out. Volunteer at your club and take roles on the committee. When discussing gender equality do not say things like “well at least it’s a start”. It should be 50/50: always.

Sailing is expensive. Talented males and females are no doubt lost due to the high cost of sailing. But everyone can go down to a club and jump on a boat. It all starts from there.

Boat owners? Put a female on the helm and put a female in charge. Experience follows!