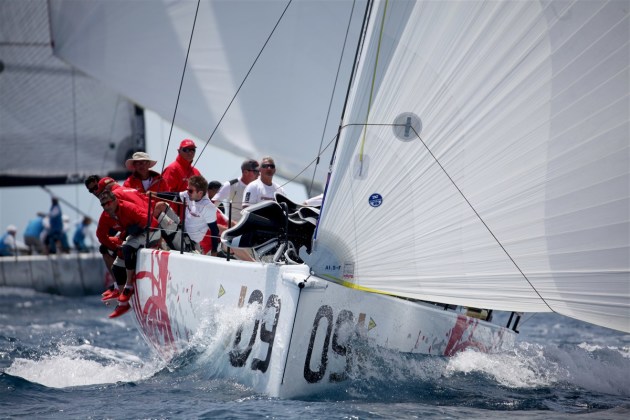 (Thursday 26th May, Scarlino) – Broad smiles around the Marina di Scarlino told the story of Races 3 and 4 for the 52 SUPER SERIES’ Scarlino Cup and without doubt the most contented crew were that of Ergin Imre’s Provezza. Not only did the Turkish flagged team win both races but they led at every mark, even the margins at times were mere metres. It was a nice early season payback to the hugely supportive and enthusiastic owner Imre who invested heavily through this last winter, ordering a new, stiffer rig and new foils and enhanced their sail programme in a clearly defined quest to stand on the podium at the end of this season.

With the 9-13kts breeze round more to the south than Day 1 there was an acknowledged advantage on the left side of the upwind, closer to the beneficial influence of the land. Provezza executed their game plan to the letter, staking an early claim to the pin end of the start line and fighting to maintain that key spot.

Their lead at the top mark in the first race was more conclusive, in the second it was down to a matter of a half a boat length on Azzurra and Quantum Racing. But the Provezza team stayed cool through the day and enjoyed their success, well knowing that they had been fortunate to make it to the start line.

They broke a deflector during the pre-race warm up and had to send a crew member aloft for nearly 30 minutes to make a fix. In fact this mishap rather cleared their heads, admitted tactician Tony Rey later, and they could do little more than focus on fighting for the pin and delivering on their game plan.

Andy Beadsworth, the GBR Olympian who steers Provezza commented: “We have done a lot of work over the winter. Ergin has committed a lot of resources to try and improve the boat with a new rig, new foils, a few changes to the positions of the foils. We have made a few sail design changes and hopefully these things are coming together and we will see a general trend of improvement. A day like to today makes everything worthwhile.”

The two race wins promote Provezza to second overall after four races of this opening regatta of the 52 SUPER SERIES season four points behind Quantum Racing. If Provezza’s starts were pin sharp today Quantum Racing’s were not up to their usual high standards. They were fouled in the final minute of the second race and had to compromise on what they wanted to do. Second to last off the line they still battled to third by the windward mark. The first start was the better but they held fourth all the way around the track. Overall it was another consistent day for the Ed Baird skippered Quantum Racing, 4,3 giving them a lead of four points now, improved by one point on the morning’s standings.

Azzurra came back to the dock with smiles much more evident than their “nightmare” start to the season yesterday. A good second in the second race of the day finally ignited their grins. They had their best start of the series so far, next boat to windward of Provezza and held second all the way around. This contrasted sharply with their first start of the day when they were ejected from the pin end sandwich and had to take a penalty. The Azzurra team were fully 40 seconds late in starting as a consequence but pulled through to sixth, what Vasco Vascotto, the Azzurra tactician, later described as “a little miracle”.

Consistency has been the Quantum Racing metier so far, Terry Hutchinson so far proving the fleet’s professor of risk management. This is especially evident on the start line where, as Hutchinson points out, they will not compromise the security of the big picture game plan by pressing for a high risk start. Don’t mistake this playoff between prudence and high stakes gambling as not pushing hard at the start:

“When I open the door in the morning I start pushing!” Hutchinson says emphatically.

Meantime rival Vasco Vascotto reaffirmed that nothing changed in the way they sailed the Azzurra, the 2015 52 SUPER SERIES championship winners, from yesterday’s high scoring opening to today’s very obvious improvement:

“I said to the guys on the boat ‘we change nothing’ we sail how we know we can sail and just remember there will be many ups and downs this season, that is how close this fleet is.”

“We recognised in the pre race line ups that the left was pretty strong. We had a panic before the start because we broke a deflector and so I say the shore crew did a greta job getting up there and lashing a new one in. They got us on the start. We worked hard on both starts to win the pin. The left came good and we were just half a length forward, and I mean only half a length. It was only that and that is that half boat length you are always looking for in tuning and training . That was what it was at the top mark.

We have done a lot of work over the winter. Ergin has committed a lot of resources to try and improve the boat with a new rig, new foils, a few changes to the positions of the foils. We have made a few sail design changes and hopefully these things are coming together and we will see a general trend of improvement. A day like to today makes everything worthwhile.”

“The first race we did not get a great start and had to clear and take some transoms and so to get back from that and get fourth was good. And in the second race at 50 seconds we got fouled and that really put us on the back foot and forced us away from where we wanted to go and so there to battle back to third was a solid day.

There are a lot of things still we can improve upon. The endgame is on Sunday and so we just try to keep ourselves in the hunt.

Everyone I think had the same strategy wanting to go left. Provezza I think footed off a little to leeward it was very subtle. The left came in strong at the top of the beat. I would have picked Azzurra winning the second race. We sailed in about 45 seconds of fluffiness and Provezza was rumbling on layline the whole time. They were just in the spot they needed to be to pin Azzurra from tacking. Certainly that was higher risk higher reward (for them). But in the big picture world I am plenty happy with how we sailed. Our executions of our starts were not to our standards and so there are a lot of things there we can make gains on, there are good things communication wise that I will get better on which will Ed get us away cleanly.

I am pushing the minute I get out the door in the morning. I think it is risk/reward, you are balancing the percentages. Yesterday first race of the year we came off the pin clean, it was high risk but it was open. We are never going to compromise our start to execute the big picture strategy. It is only one part of the race.”

“I am happier for sure. Yesterday was a bit of a nightmare for sure. And then in the first race we had a penalty and so were last by a long way. Left was so strong that it was then hard to come back from there, but really we did a nice job from there. We made a little miracle. We had a nice start in the second race. Who won the pin won the race but it was very close. At the top mark it was just down to a few metres. Now we need to slow ourselves down a little, prepare well and relax. We are doing a good job, speed is good, crew work is good, the worst thing is the tactician. We are happy today because we know that we don’t have to change much. I said to the guys this morning ‘we don’t have to change anything, be ready to have some ups and some downs this season because the fleet is so competitive.”