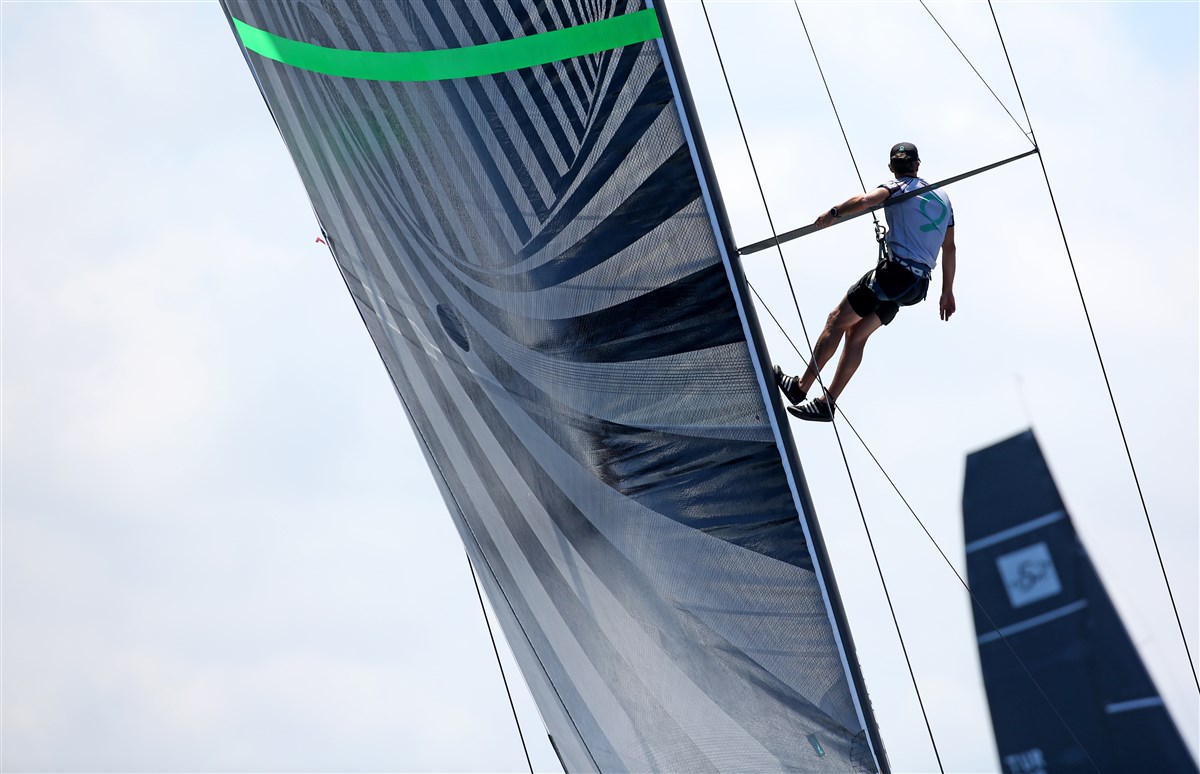 (Thursday 27th July, Puerto Portal) – Ergin Imre’s Provezza team have been tantalisingly close to winning a regatta twice this season but have not yet managed to close the deal. They go into the final day of the Puerto Portals 52 SUPER SERIES Sailing Week Friday with a lead of three points hoping that their confidence on the Bay of Palma, their smooth sailing and astute tactics will prevail and they will finally crack their last day hoodoo.

“I really don’t want to make too much of it. We will really stick to our processes, try to start clean and keep doing the things we have been doing well. We have good speed and very good communication between us and hopefully that will make the difference this time,” emphasised America’s Cup winning helmsman Peter Holmberg who steers the Turkish-flagged Provezza.

Provezza took the overall lead in the regatta by pairing a first and second together from the first two races today, contested in more typical Palma sea breeze conditions, but they faltered badly in the third race when they were over the start line. Adding to their woes they were penalised too and so started last. Perhaps the best insight into the fight burning in the belly of the Provezza team was the never-say-die recovery. They stole three places on the finish line to earn the fifth place which saved a lead going into the final day.

They may lead by three points over second placed Platoon but in fact the fifth regatta title of the season is wide open. Just seven points separates Provezza from sixth placed Slead. Two races are expected to form Friday’s finale with Azzurra one point behind Platoon, and Quantum Racing five points off the lead.

The right side of the upwind seemed to hold a regular dividend. Ray Davies and Tomasso Chieffi on Bronenosec sacrificed a couple of seconds at the signal boat end of the start in order to break right and went on to win their first race this regatta. Provezza were out to the middle right early after a good, fast start and went on to second in this first race of the day. Azzurra clawed their way up to third.

In the second contest of the day Provezza passed early leader Alegre during the latter stages of the first downwind when the pacemakers were blanketed slightly by the chasing pack. Provezza went on to win while Niklas Zennström’s Rán Racing got second – after a big first run recovery – with Sled third.

Current 52 SUPER SERIES champions, Quantum Racing finally got the start they wanted off the line in the third race and were able to lead to the finish from Azzurra, while Harm Müller-Spreer’s Platoon completed a typically solid day in third, 4,4,3 for the day.

Quantum Racing finished their day on a good note, a welcome upswing after a fifth and eighth. Tactician Terry Hutchinson noted: “These conditions are great equalisers, it felt in Porto Cuervo that we had a little edge in speed and performance and here not as much. There is a slightly different sea state, slightly different wind weight and so we have to keep working it and trying to do better, but so much of it is out of the starting line.

If I was to grade my performance on the starting line here it would be a SOLID ‘F’. Like, well-earned! We just have to be better at it. Better means consistent and smooth. That’s our focus for tomorrow. We won the Copa del Rey here going into the last day a couple of years ago, five points off the lead going into the last day. Provezza has sailed very well here so far this regatta but everyone has struggled with consistency and that’s what we have to work towards.”

While Quantum Racing suffered with a couple of bad calls over the day and compounded their pain when they had to circle round after being squeezed out from the windward mark layline, rounding ninth, so too Azzurra had their own problems. Penalised for a pre-start incident leading into Race 1, they had to fight back hard to gain a third.

Azzurra’s tactician Vasco Vascotto emphasised: “I think we sailed very very well today. After the penalty we did a fantastic race the first race, and we did quite well also the two other races. The average today was almost three points and that is an average that gives you an opportunity to win this event. Now I need to calm down, have a beer maybe, and let’s see. But we need to be lucky in the future. But unfortunately I cannot forget the scores and how we stand. I would like to go to sleep with some points advantage but unfortunately we are so close, when somebody makes a mistake one race then the others make a mistake the race after. So it’s very, very difficult, we need to stay focussed now we’re just almost one event to the end.”

Coach to the world champions Platoon, Morgan Reeser, explained their view of Friday’s finale: “It is too early and too close to think about points. It’s got to be processes, good start, good first shift and take it from there. There’s too many good teams to worry about the scores. As soon as you worry about the scores you’ve lost the plot.”