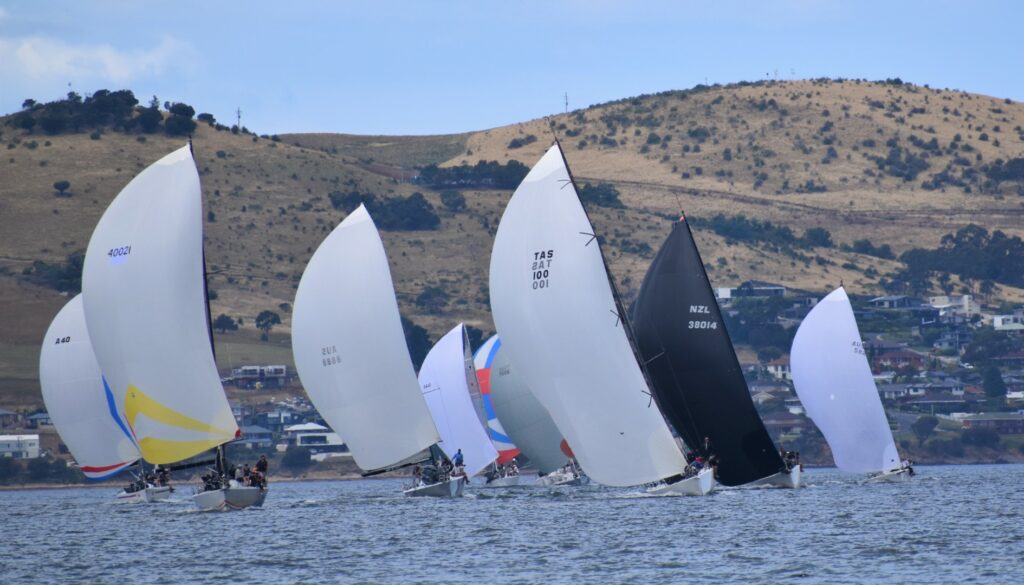 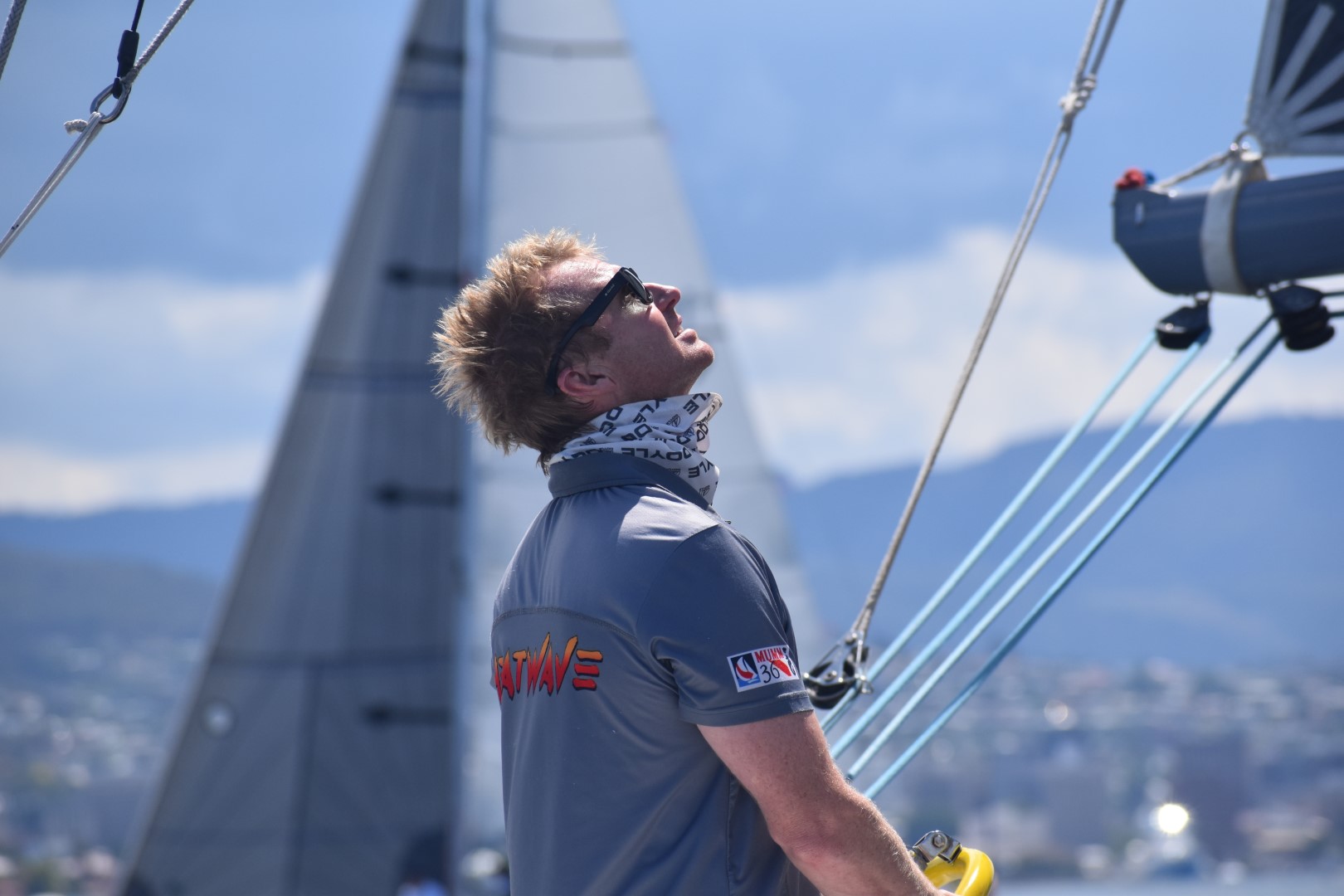 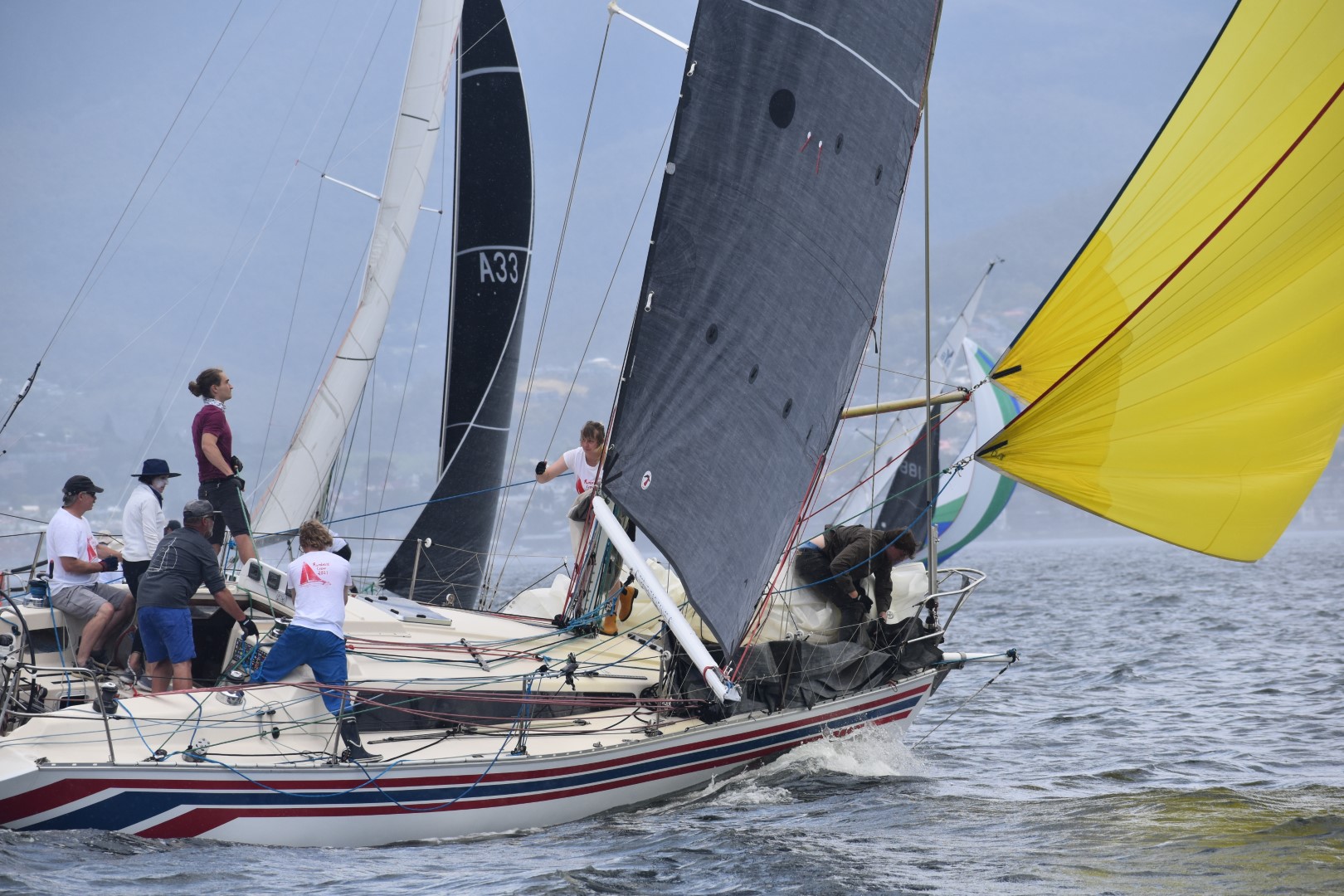 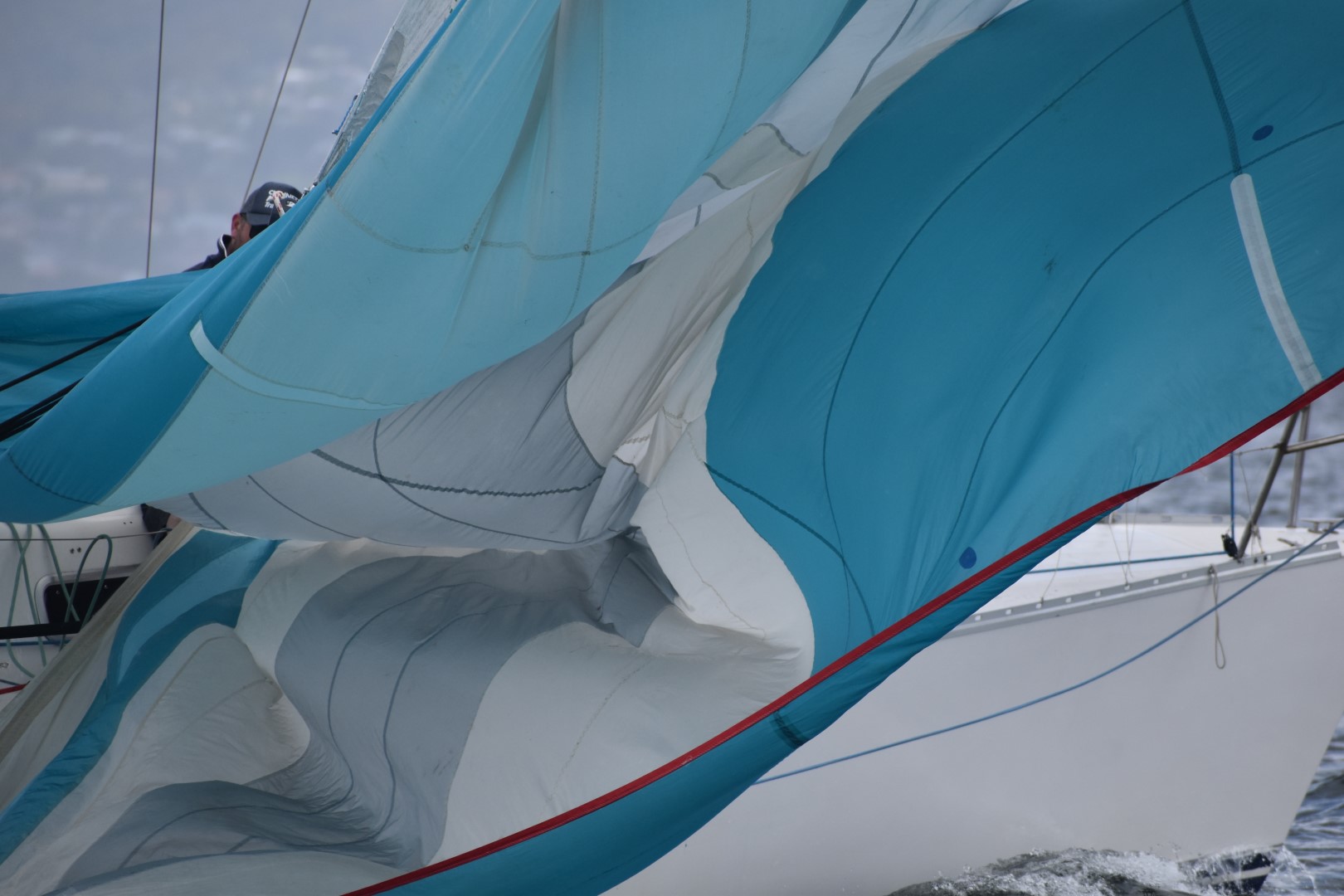 The rush of pulling the spinnaker down. Pic - Jane Austin 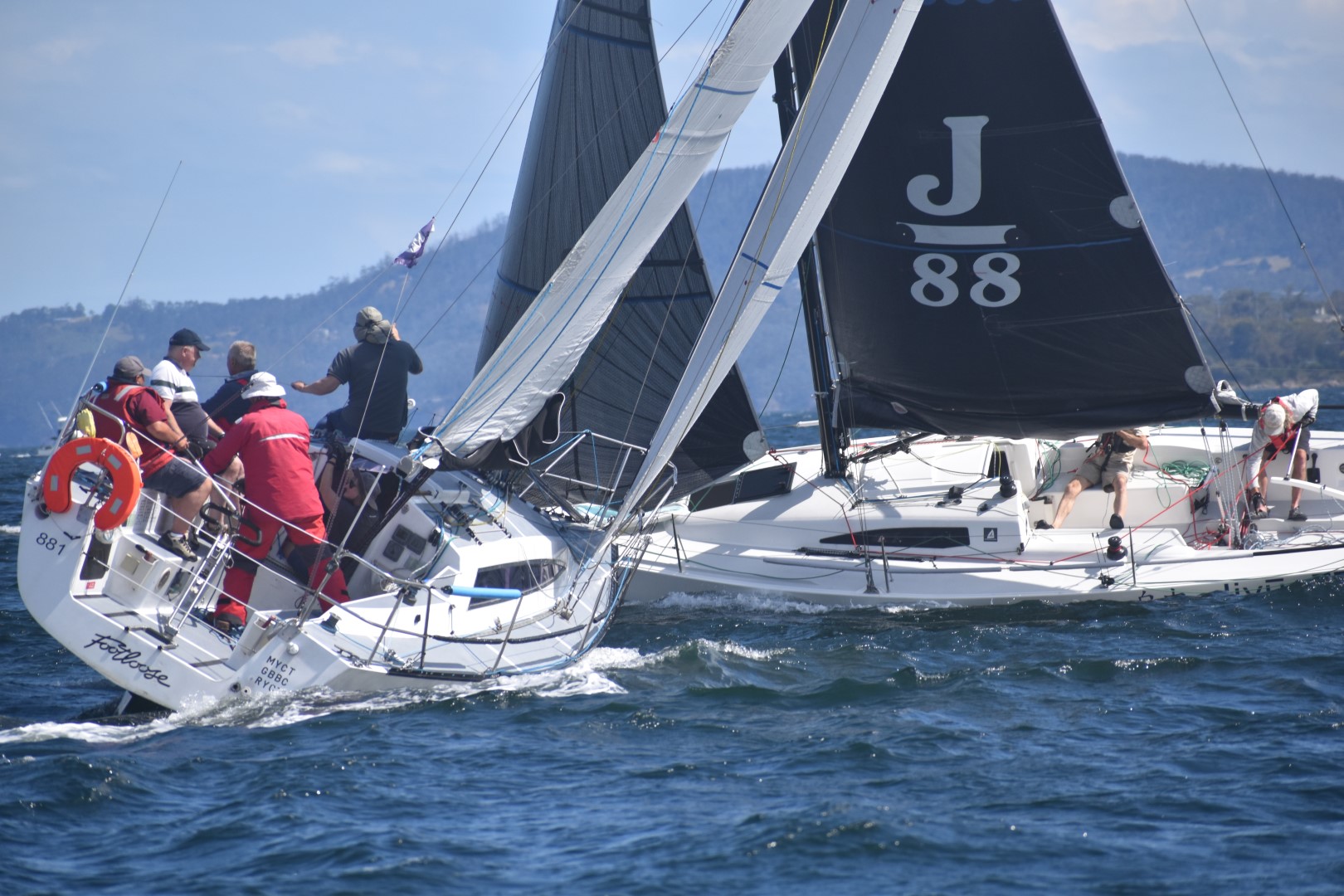 Footloose had a cracker in the first race, winning on PHS, AMS and IRC. Pic - Jane Austin 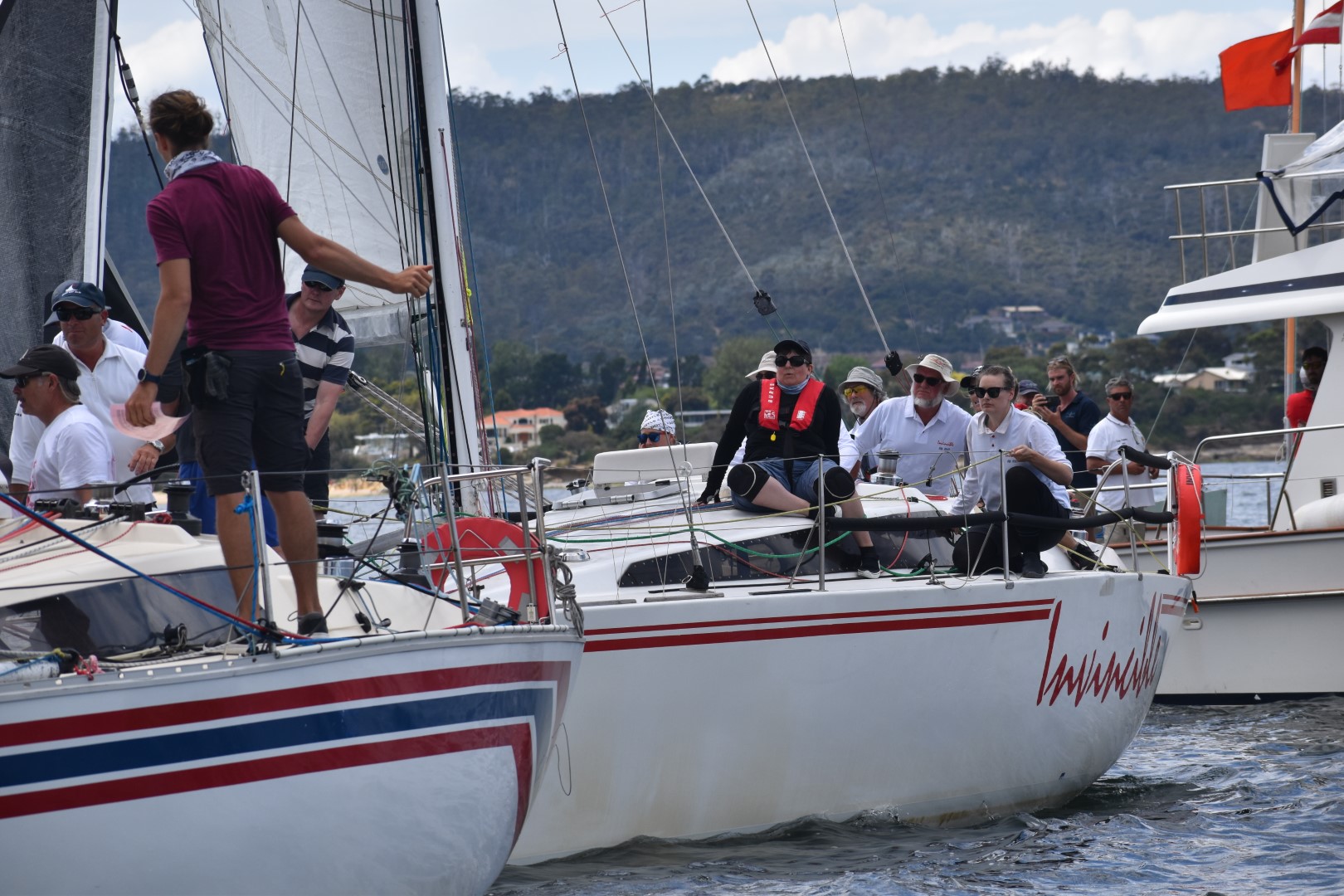 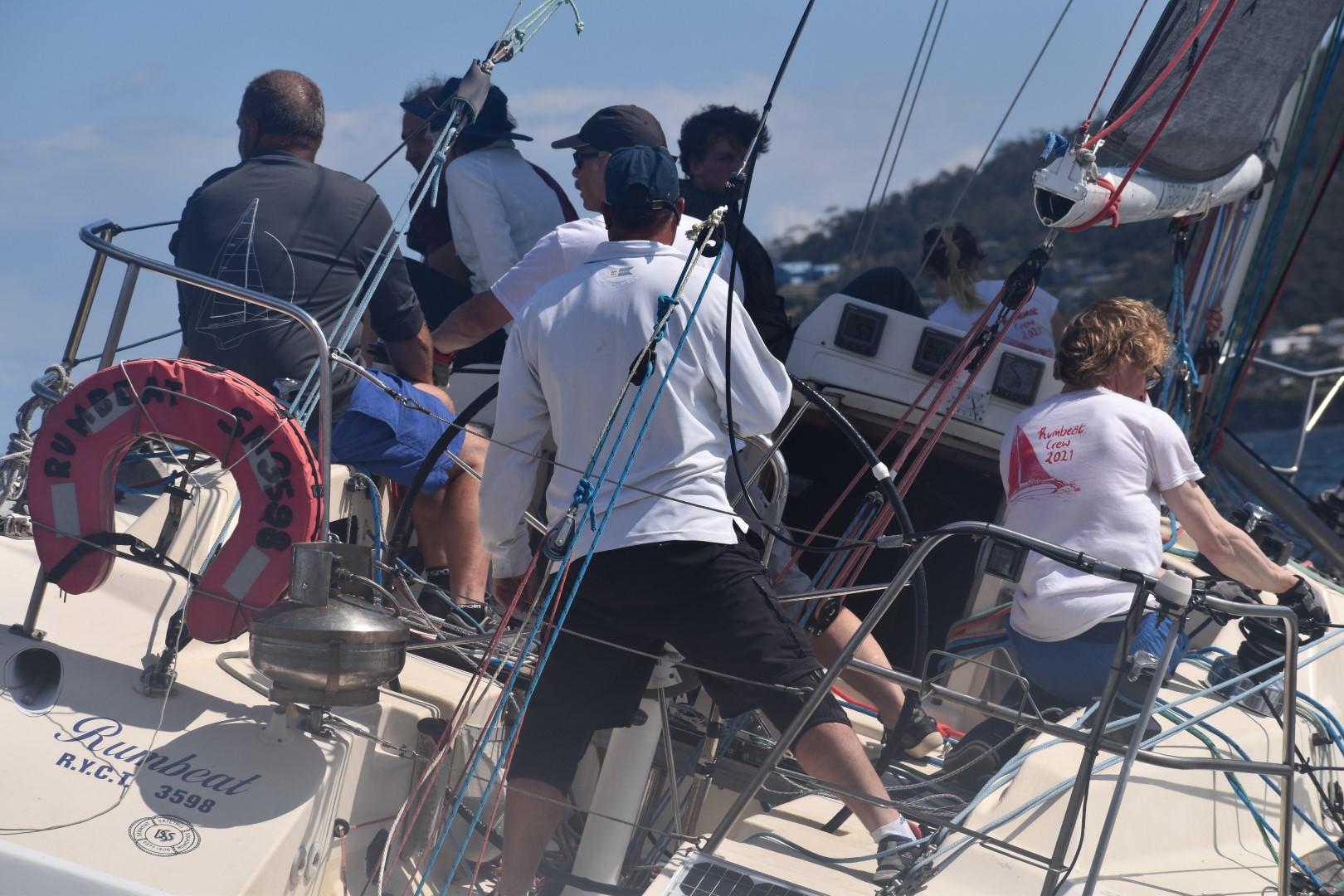 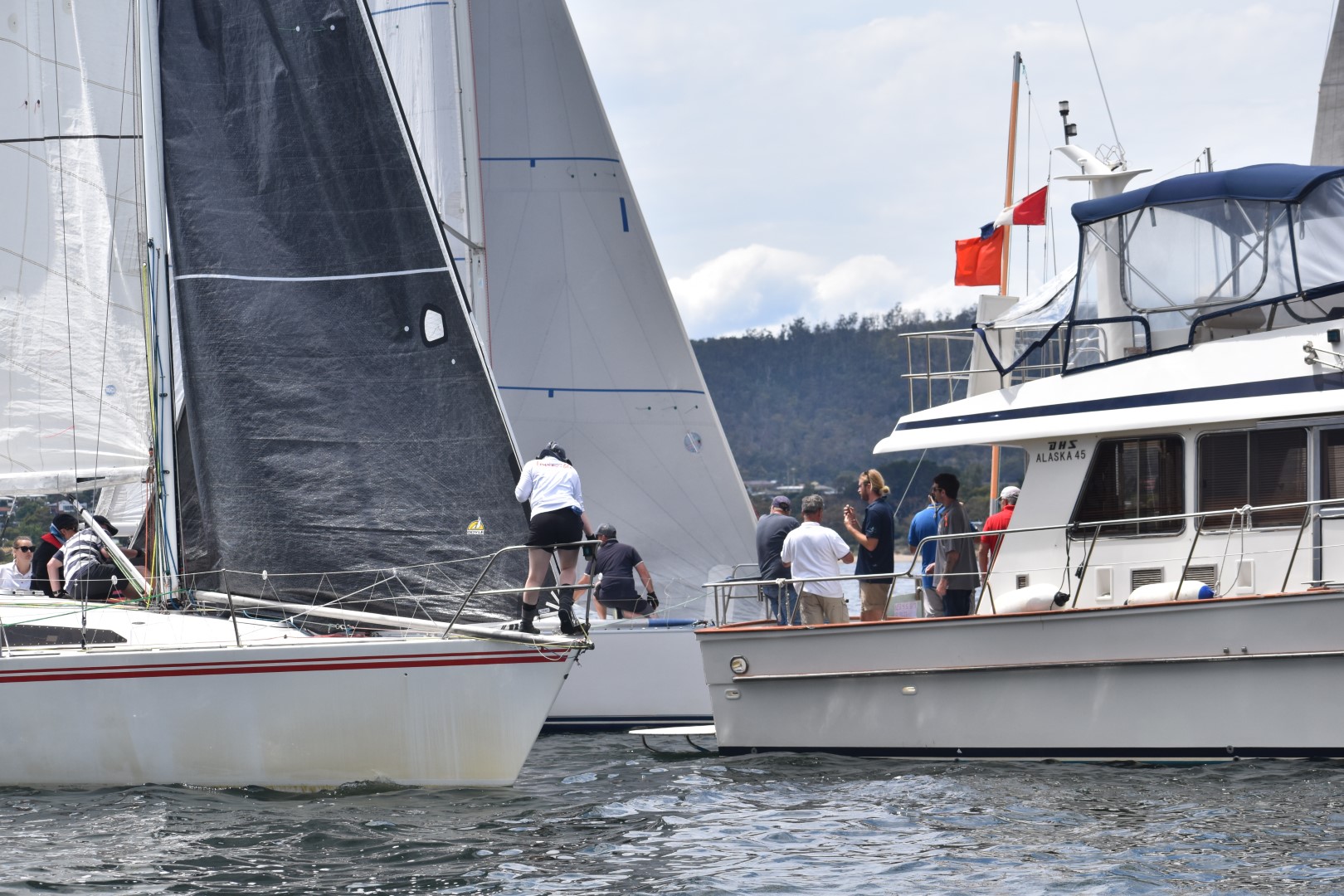 Getting ready for the race start. Pic - Jane Austin 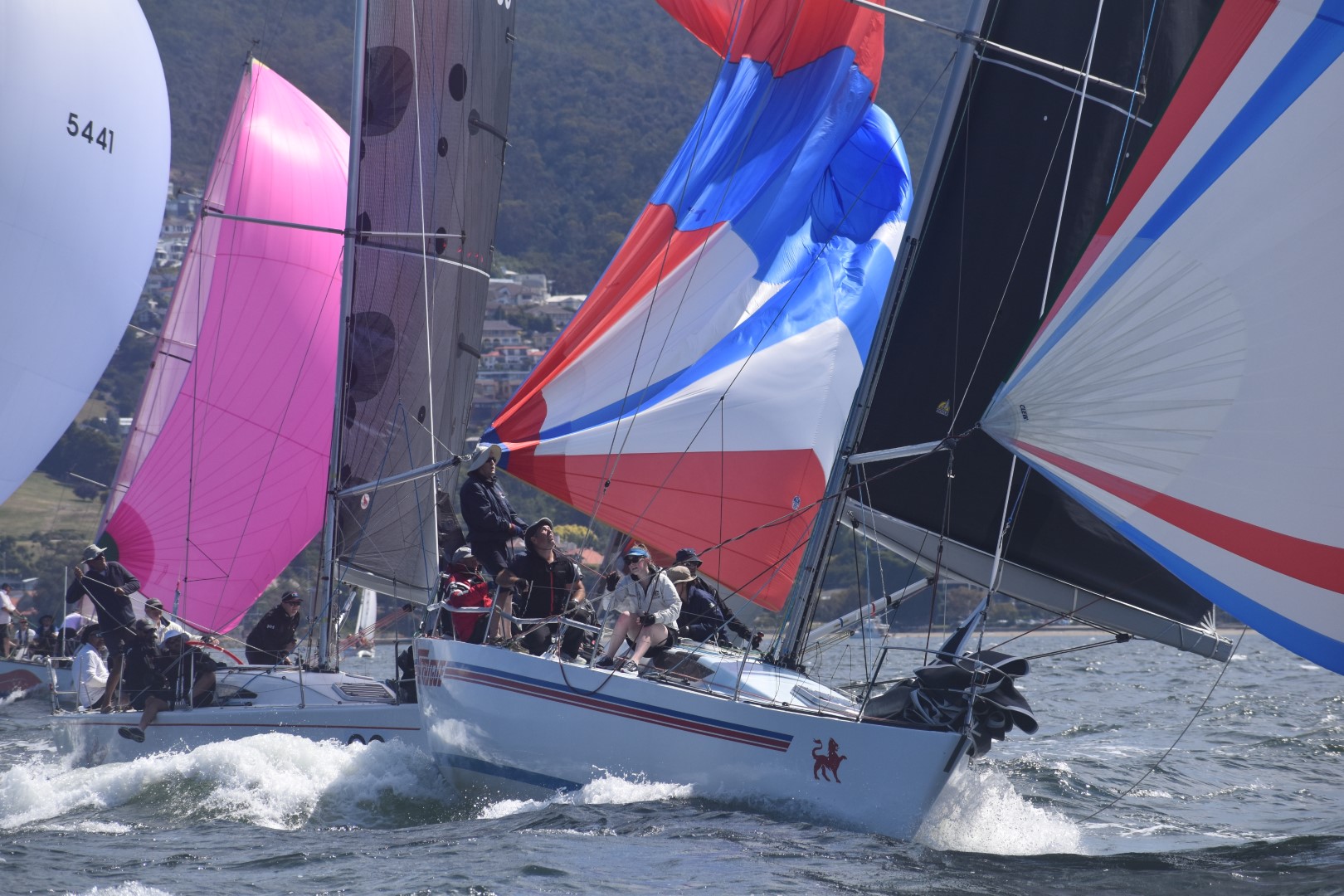 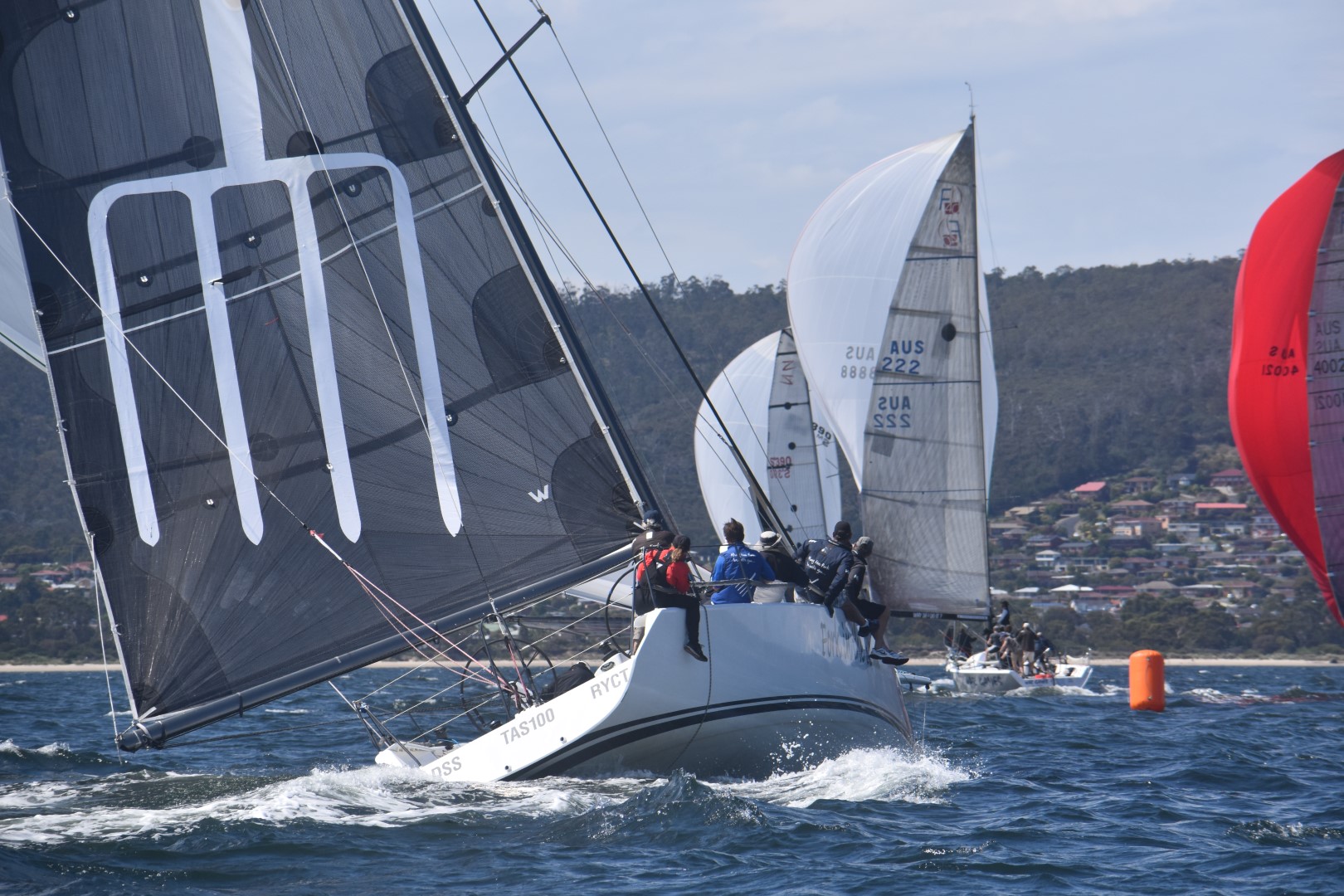 Fork in the Road 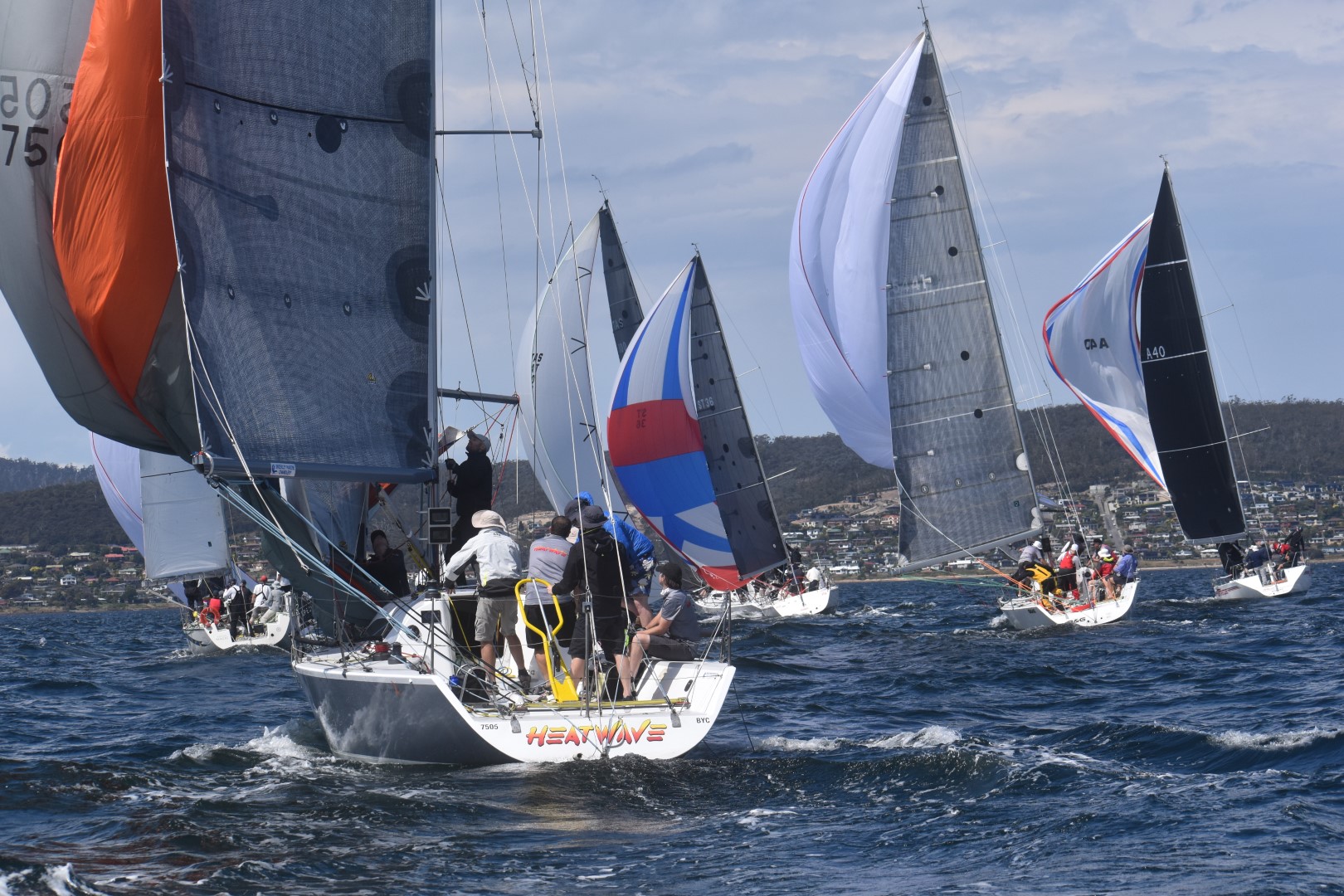 While the world’s cricket fans were focused on the Ashes at Blundstone arena, Midnight Rambler (Ed Psaltis) and Intrigue (David Calvert) were locked in their own fierce battle in Group 1 of the Combined Clubs Harbour Sailing Series (run by the Royal Yacht Club of Tasmania, Derwent Sailing Squadron Inc and Bellerive Yacht Club).

The experienced skippers with their equally slick and talented crews, enjoyed the light to moderate sea breeze in Saturday’s racing, with Intrigue winning on IRC and AMS handicaps in the first race of the day and Midnight Rambler turning the tables to take out IRC and AMS and adding PHS in the second race.

Fork in the Road was first across the line in Group 1 in both races and battled hard with Jazz Player (Brent McKay), War Games (Wayne Banks-Smith) and Guilty Pleasures VI (Gary Cripps) on the race course. On PHS scoring, Guilty Pleasures VI won the first race by two minutes on corrected time, but went from peacock to feather duster, finishing second last in the next race. War Games and B&G Advantage (Jeff Cordell) finished in a dead heat for second on corrected time (01:06:00) in the final race with Fork in the Road only one second behind them (01:06:01).

There was a lot of shouting at the top mark in the second race of the day when Midnight Rambler shot up to round the top mark in the first lap, forcing Fork in the Road to go well past the mark before they could bear away. A tight reach to the wing mark saw lots of broaching and flapping spinnakers before the fleet rounded the mark and bore away.

Intrigue is leading the harbour series on IRC and AMS, two points ahead of Midnight Rambler on IRC and three points clear of their rival on AMS, while Guilty Pleasures VI retains her lead on PHS. 42 South (Mark Ballard) continued her dominance of Group 2 winning on AMS and PHS in the first race and taking out AMS in the second, while Small Gains (Steve Chau) won on IRC and PHS in the next race.

The Race Committee had a few nervous moments at the start of Group 3’s first race, with a few teams struggling to find a gap at the boat end. Trouble (Dave Willans) judged her approach perfectly, shutting out Invincible (Bryan Walpole) and Rumbeat (Justin Barr) who both had to go above the start boat and come around for another go at the line. Footloose (Stewart Geeves) kept out of trouble and had a cracker in the first race, winning on PHS, AMS and IRC while Invincible took out PHS and IRC in the second.

In Group 4, Innovator (Ian Smith/Dean Aberle) won on PHS in the first race from Xanthos (Jock Young) and in the second race, Camlet Way (Stephen Mannering) finished first on PHS ahead of Astrolabe (Peter Bosworth).