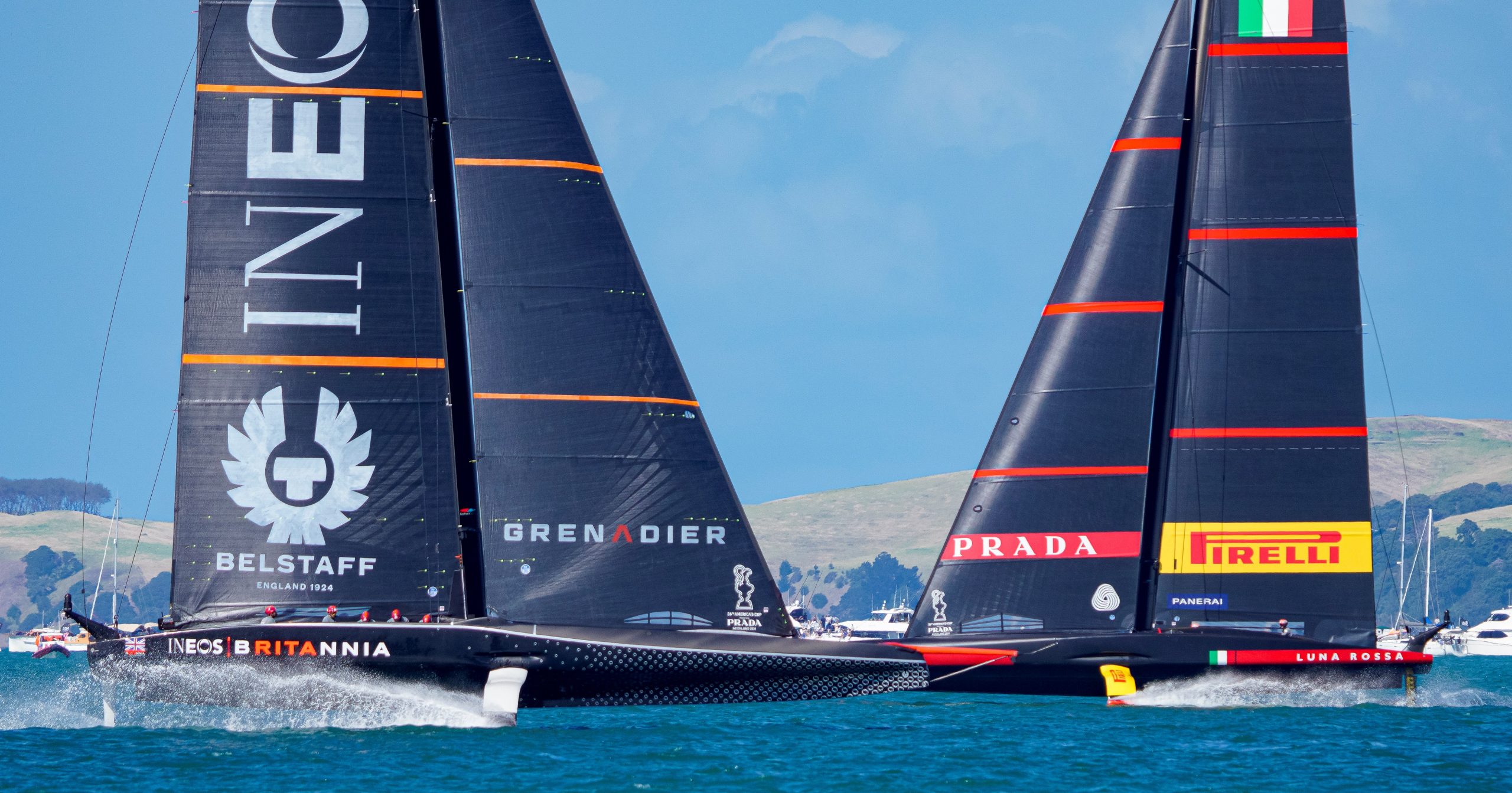 Luna Rossa Prada Pirelli and INEOS TEAM UK squared off today to determine the winner of the PRADA Cup Challenger Selection Series and the right to face the Defender Emirates Team New Zealand.

First day of the PRADA Cup Final was a double for Luna Rossa Prada Pirelli, with the Italian team taking the lead of the provisional ranking clearly leading both races and appearing just a click faster than the British team.

Still a long way to go to the end being a 13-races series, with the Italians in need of five more wins to go through to the America’s Cup. Ineos Team UK still needing seven wins.

“Who will win?” has been one question that has been doing the rounds for the past week. With a range of weather conditions over the next few days, the prospect of a quick answer to the most popular question in Auckland seems unlikely, leaving the racing to deliver the answers.

The morning’s weather forecast suggested that there could be a delay to racing as the sea breeze took time to build against the gradient breeze. However the start was only pushed back by two minutes. Once the minimum wind speed requirements were met, the racing was underway.

But while one hurdle had been crossed in getting the opening race of the Prada Cup Final underway, both teams were acutely aware that staying on the foils would be crucial.

As a result, it was perhaps not surprising that neither Luna Rossa Prada Pirelli (ITA) which had entered on port and INEOS TEAM UK (GBR) which came in on starboard were inclined to engage in a close quarters pre-start duel. The risk of coming off their foils was too great.

And with just under a minute to go to the start INEOS TEAM UK was the first to do just that as the hull splashed down.

Luna Rossa came close to doing the same, but as her crew have demonstrated in previous races, the Italian boat is slippery in light winds and got back underway.

As the clock counted down to the start, the Italians remained on their foils, just; their on board comms revealing how carefully they were playing this crucial stage of the race.

As she crossed the start line, INEOS TEAM UK was still off the foils. The gap between the two was growing quickly.

From there, even when the British had got up and running, the distance continued to grow, especially as INEOS TEAM UK incurred the first of two boundary penalties.

Luna Rossa passed through the first windward gate 1:20 ahead. By the bottom gate she had stretched out to 1:36. Another lap of the course and the Italians were continuing to deliver a flawless performance in the light conditions and had pulled out to 1:57.

Meanwhile, INEOS TEAM UK had found her feet and stayed on the Italian boat. But with just one lap to go the gap, which was now around 1800m, it looked impossible to close-down.

The sea breeze built quickly. White caps were now spread across the course area. Race 2 looked set to be a completely different match.

In the pre-start, INEOS TEAM UK came smoking in on port tack and headed out towards the right-hand side of the pre-start box. Luna Rossa Prada Pirelli gybed and followed. A duel looked set. INEOS TEAM UK was leading the charge, but was also early for the start and keen to burn some time.

While the physical gap between the two closed, the start was even, both at pace and both at full speed. If there was an advantage it was to INEOS TEAM UK, which was to leeward and slightly ahead.

It was a position Luna Rossa Prada Pirelli struggled to live with as she sat in the turbulent air off the back of the British. Seconds later she was forced to tack off. Advantage INEOS TEAM UK.

But when the pair came back together, INEOS TEAM UK was on port tack and had to give way, choosing to dip behind Luna Rossa Prada Pirelli. In the seconds that followed, with the Italians on port and the British on starboard, it was Luna Rossa that appeared to gain in a slight lift in the breeze.

When the pair came back together, this advantage was enough for them to cross in front of the British to pass through Gate 1 with a lead of 11 seconds. INEOS TEAM UK rounded the same mark but gybed shortly after they had rounded. Meanwhile, Luna Rossa Prada Pirelli pressed on towards the right hand side of the course.

Speeds were now into the 43-45 knot range with INEOS TEAM UK generally a notch quicker and slightly lower in heading. But by Gate 2, distance between the two had grown to 270m, Luna Rossa Prada Pirelli’s crew choosing the right-hand mark, INEOS TEAM UK the left.

Through Gate 3, Luna Rossa edged out a few more seconds to round 19 seconds ahead as the pair chose opposite marks. Once again, the Italian performance was silky smooth. This time on the downwind leg the speeds were much more closely matched with nothing between them. In the steady sea breeze, there was no real opportunity for INEOS TEAM UK to make up the distance.

On the last windward leg INEOS TEAM UK had hauled back a few metres, but time was running out to reel in the 270m required to get back in touch with Luna Rossa Prada Pirelli.

At the top, Gate 5 Luna Rossa was now 26 seconds ahead as she went around the left-hand mark. The British took the right-hand mark in a bid to try something different once again. But the Italians’ performance remained solid. A few minutes later they crossed the finish line 26 seconds ahead to take their second win of the day.

James Spithill, Luna Rossa Prada Pirelli helmsman said, “It’s hard every time you go on the water, because for this class of boats we haven’t done a lot of racing. The boys have executed great maneuvers and we were able to get around and ahead of them.”

The Australian skipper continued: “We have a great boat, a great full package here, and a very good team backing us up. We’re confident on our boat, but having said that, we still know there is quite a bit on the table.

“As I said, we made few mistakes today out there and we go back trying to sharp up on those for tomorrow.”

Races resume on Sunday at 4:00 PM New Zealand time. Two races are planned, weather permitting. The Prada Cup Final is a best-of-13 series with a team needing to win seven races to advance to the America's Cup Match and face the Defender Emirates Team New Zealand on 6 March

Full replay of the races, go to: www.americascup.com/en/relive

Post-race press conferences are held approximately one hour after the end of the last races and are streamed live on: www.americascup.com