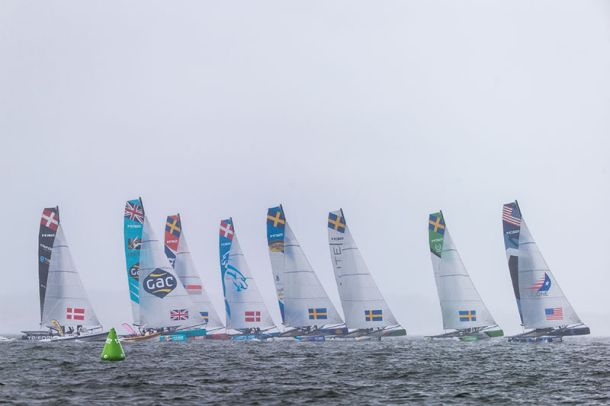 Eight boats on the starting line in pouring rain in Helsinki

The opening day of the M32 Series in Helsinki was two-folded. The racing on the water was smooth for the sailors and organizers, but the weather gods did not favour the event’s first day in the Finnish capital. The rain was pouring down.

The positions were changing continuously in the extremely close six races. It is a characteristic of the M32 racing that even the top boats have to accept some rather high points in some of the races. The margins are minimal and any of the eight professional teams can on a good day squeeze onto the podium.

The winner of the day was Alite Racing of Sweden, skippered by Martin Strandberg. Having scored 16 points in the six races, Strandberg’s crew was the most consistent with two wins and two second places. Mattias Rahm (SWE) and his Rahm Racing Team finished only one point behind the winners of the day. The 1-2-3 day for Swedish teams was completed by Hans Wallén and Wallén Racing in third with 22 points.

The five-time World Champion in Match Racing Ian Williams (GBR) and Team GAC Pindar finished in eighth place with a fourth as the best score of the day.

The Battle of Helsinki will continue tomorrow. Follow the live action from 1.45 pm local time on m32series.com.