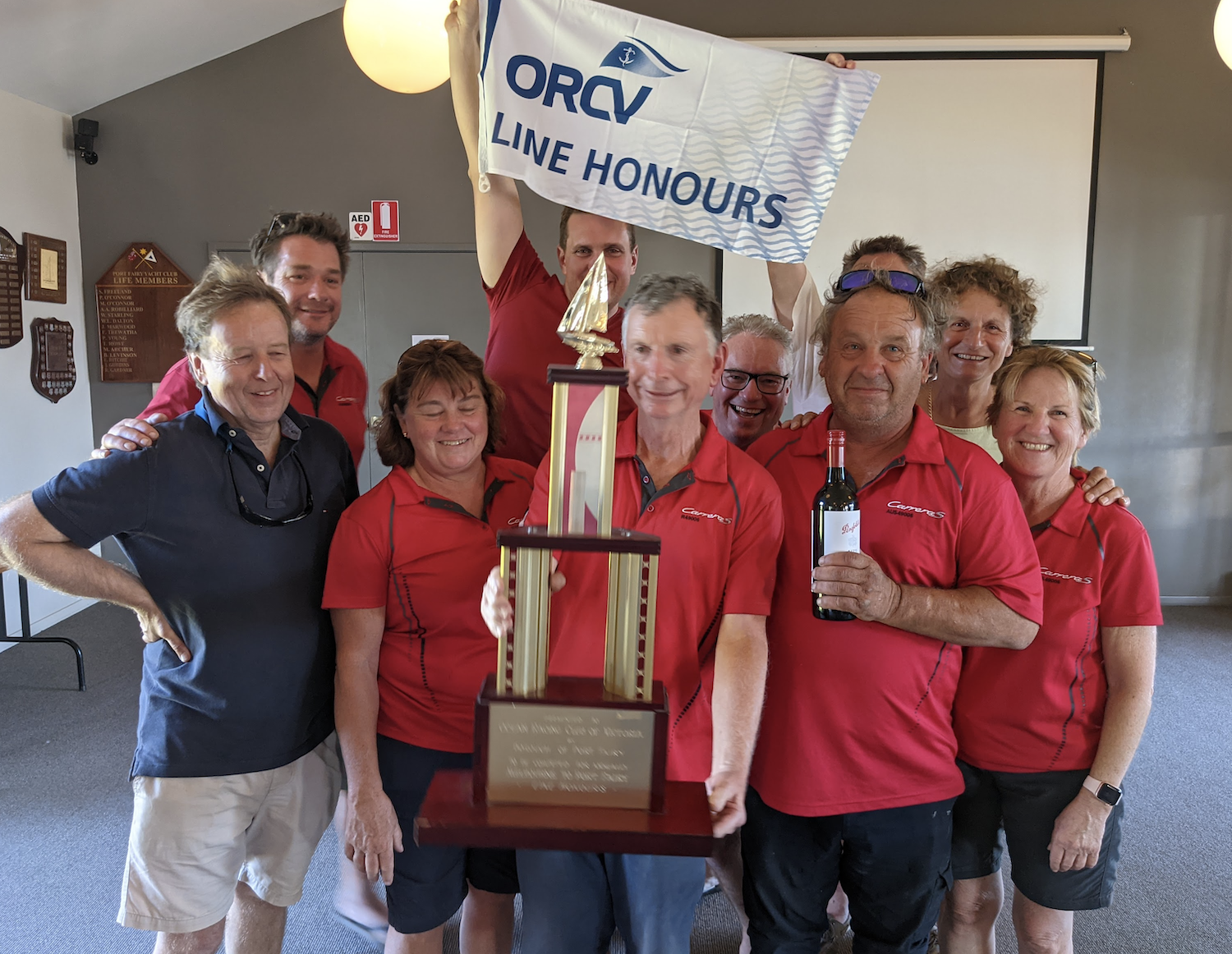 Carrera S, a Marten 49, skippered by Gerry Cantwell took first place on AMS and PHS plus line honours in the 2021 ORCV Port Fairy race in what the skipper described as “a very challenging race”

“It wasn’t a physical race – I don’t think I’ve ever had a race where the deck stayed dry and was so comfortable. For the first few hours after the start, we found ourselves in a pack with Tevake II and Alien and it was frustrating trying to get away and find what breeze there was in the very light conditions.”

As the boats came to Cape Otway just on dusk, we saw two groups emerge, with Carrera S, Tevake II, Maverick and Foggy Dew going a little further east in search for wind. This tactical move paid off in the long run.

Cantwell went onto say, “We were possibly lucky then after we came around the Cape that we had about 1.5knots of current with us in such light conditions.”

“It was hard to predict but as we rounded the Cape and night fell, we sailed into a wind hole,” explained the Maverick crew of Anthony Hammond and Rod Smallman. “We saw our lead being diminished with Blue Water Tracks, our double handed rival, going a little further out to sea and starting to catch up,” Rod said. “With no wind at all we just needed to wait for it to build again, this time coming from the West.”

The crew of Tevake II (third on AMS) had a special mission in this race, to honour owner Angus Fletcher who passed away recently. Paul Neilson, skipper of Tevake II, said, “It wasn’t a Tevake II ideal race with light winds, so we are so thrilled with the result especially being AMS, which was Angus’s favourite. The crew worked the boat hard, changing headies and spinnakers to just keep the boat going. It may have been champagne sailing conditions but hard work and a little bit of luck that put us in the right position.”

After his first race to Port Fairy onboard his own Northshore 369 yacht ‘Foggy Dew’, skipper Robert D’Arcy remarked, “The crew were amazing, managing multiple sail changes as we tried to get going in very light and challenging conditions and we knew we needed to go out about 3nm to catch the breeze before coming in closer again at the end.” It was a move that paid off with Foggy Dew taking out second place AMS and third on PHS.

The lead changed constantly with everyone at some point being first on PHS in that final leg after rounding Cape Otway and each found their own challenges. Not quite the text book “one reach to the finish”.

Cantwell went on to to say, “We all enjoyed the last 8 hours where we had 10 – 17 knots from the North after such long periods of no breeze. We are all now enjoying the wonderful Port Fairy Yacht Club hospitality and the seaside village.”

Read also our lead up of Tevake II and their campaign with this race to honour Angus and Holly Fletcher. https://www.orcv.org.au/port-fairy-blog/5231-honourm2pf21.