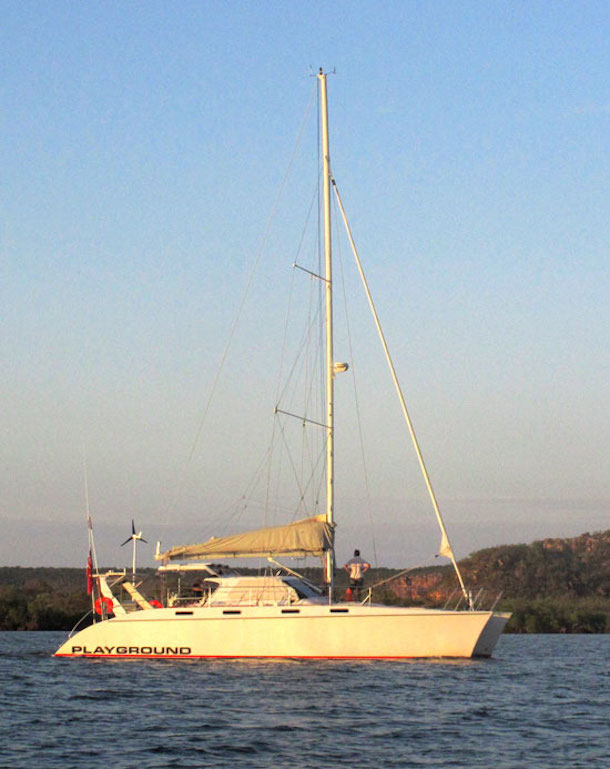 First over the line in the 2015 Wonderful Indonesia Fremantle to Bali RALLY was Martin Webster and Greg Barrett’s catamaran Playground. Crossing the finish line in Bali at 12.49am on Wednesday 27th May 2015 completing the 1440 nautical mile race in 8 days and 14 hours.

Playground’s crew consisted of experienced sailors Greg Barrett, Martin Webster, Michael Bresnahan and Stuart Field. This was Playgrounds first Fremantle to Bali and leading the rally fleet for the entire 1543 nm they sailed made it a very successful sail for them.

Martin Webster, skipper of Playground said the sail was wonderful and he couldn’t have asked for a better crew to share it with. “We flew up the coast experiencing the best of WA sailing until reaching the North West Cape where we had to start motoring as the wind died off.”

The rally was a breeze for Playground with chef Stuart Brown on board and cooking up yellow fin tuna one day and a striped fin tuna the next, finishing off dinner with Connoisseur ice cream. “You could say we did not want for anything”, commented Stuart Brown. “However a microwave would have been nice”.

Navigator Greg Barrett said “The first half of the rally up the West Australian coast was spectacular. We stayed ahead of race boat Audeamus for those first days with no motoring”.

Playground experienced challenges just like all the other boats in the event, including a breakage with their spinnaker halyard. “It was an issue, but the crew handled it extremely well, with Stu volunteering to go up the mast to assess the problem,” reflected skipper Martin Webster. “Unfortunately we haven’t yet been able to fix the halyard”.

Exceptionally light winds in the middle of the course have seen John Holder’s race boat Plus 16 and Rod Mulcahy’s rally boat Slipstream retire from the event with both yachts continuing to Bali under their own power.

Audeamus which also retired from the race to allow her to meet crew obligations has now arrived in Bali. Skipper Lisa Chamberlain said that due to crew commitments Audeamus had to reach Bali by a certain time.

“For 36 hours we went without any breeze over 5 knots which meant we were not going to meet our deadline and so we took the decision to withdraw from the race and use our motor to arrive in Bali today,” she said.

Audeamus’s owner Adrian Fini said even though they had to withdraw it was a great adventure. “The crew worked superbly together. It took a bit longer than we expected, but that’s sailing.”

The next yacht expected to arrive is Brian Todd’s race entry Sue Sea, anticipated at the finish line tomorrow (Thursday 28 May).

To track the rest of fleet on their progress to Bali follow the race via the Yellow Brick Trackers here: http://yb.tl/f2b2015 Further information and all event details of the 1440 nautical mile blue water race and rally are on the event website www.fremantlebali.com.au