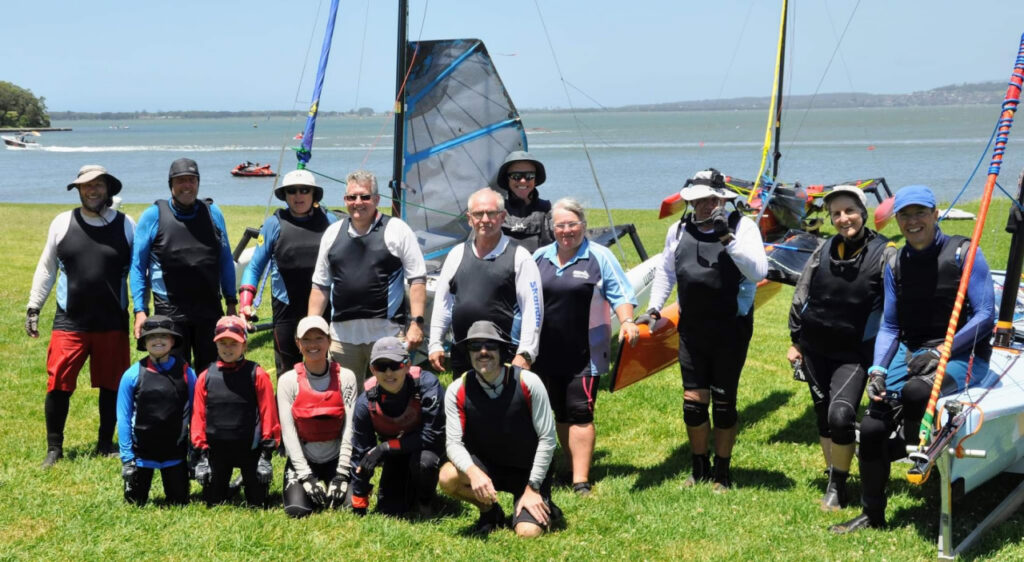 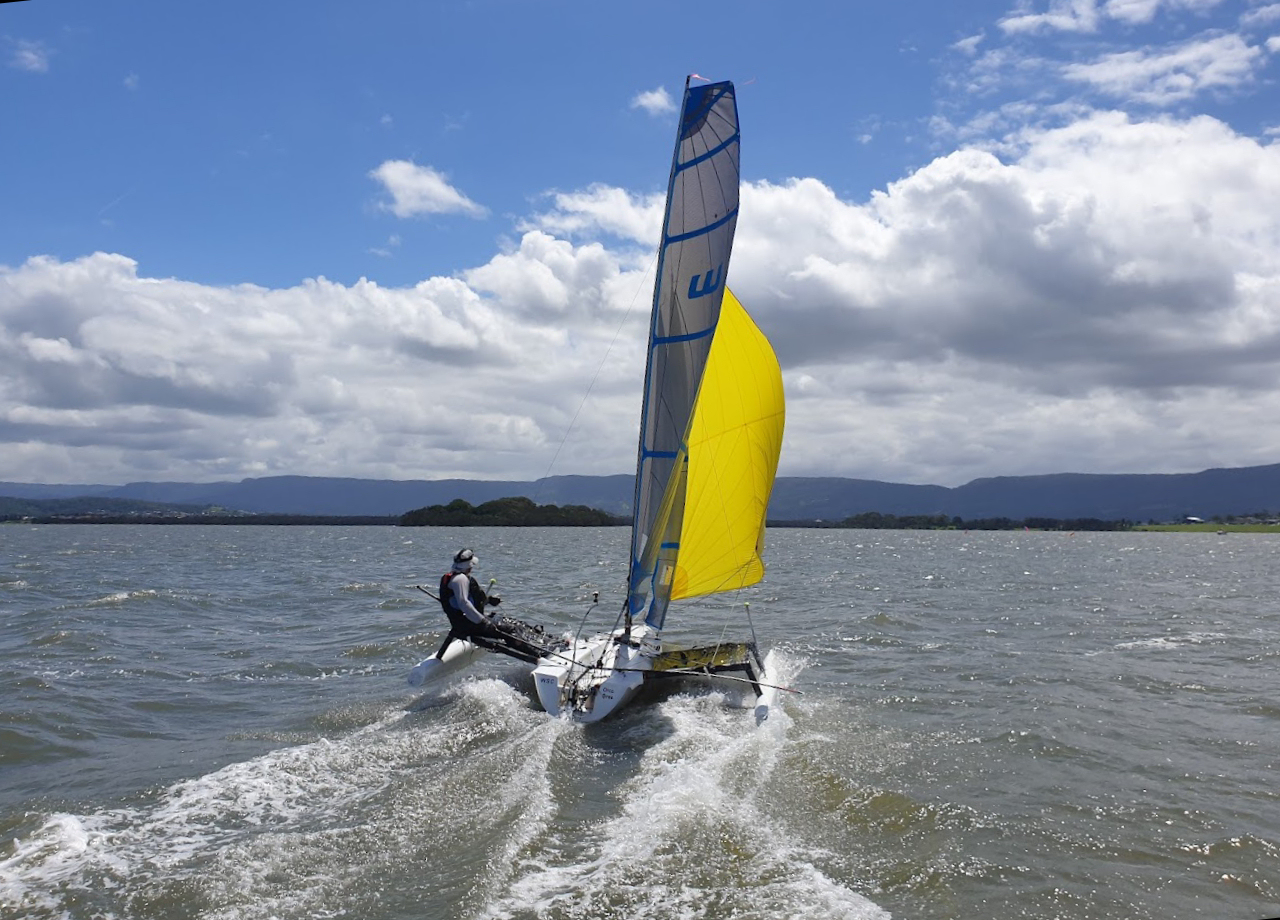 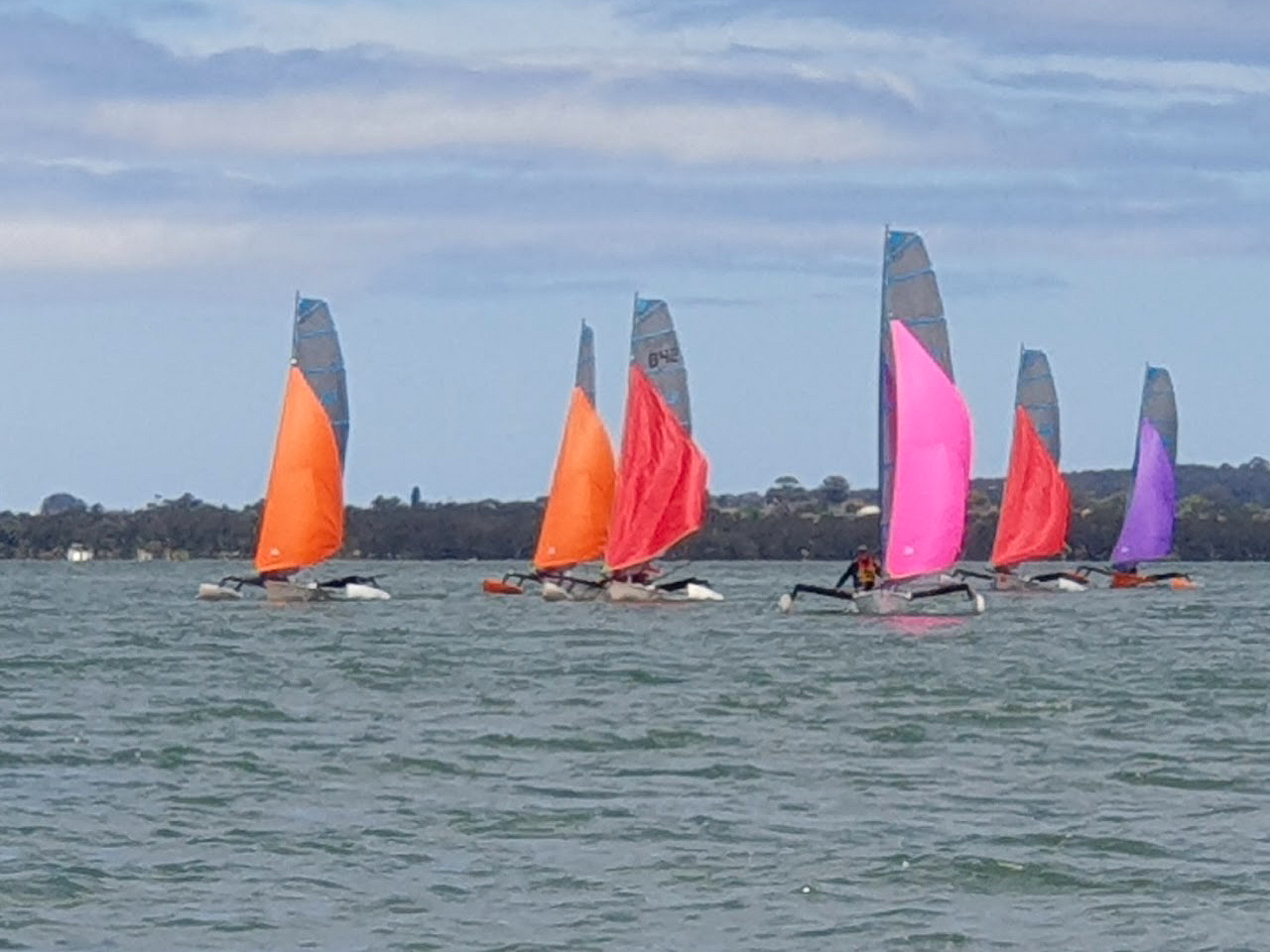 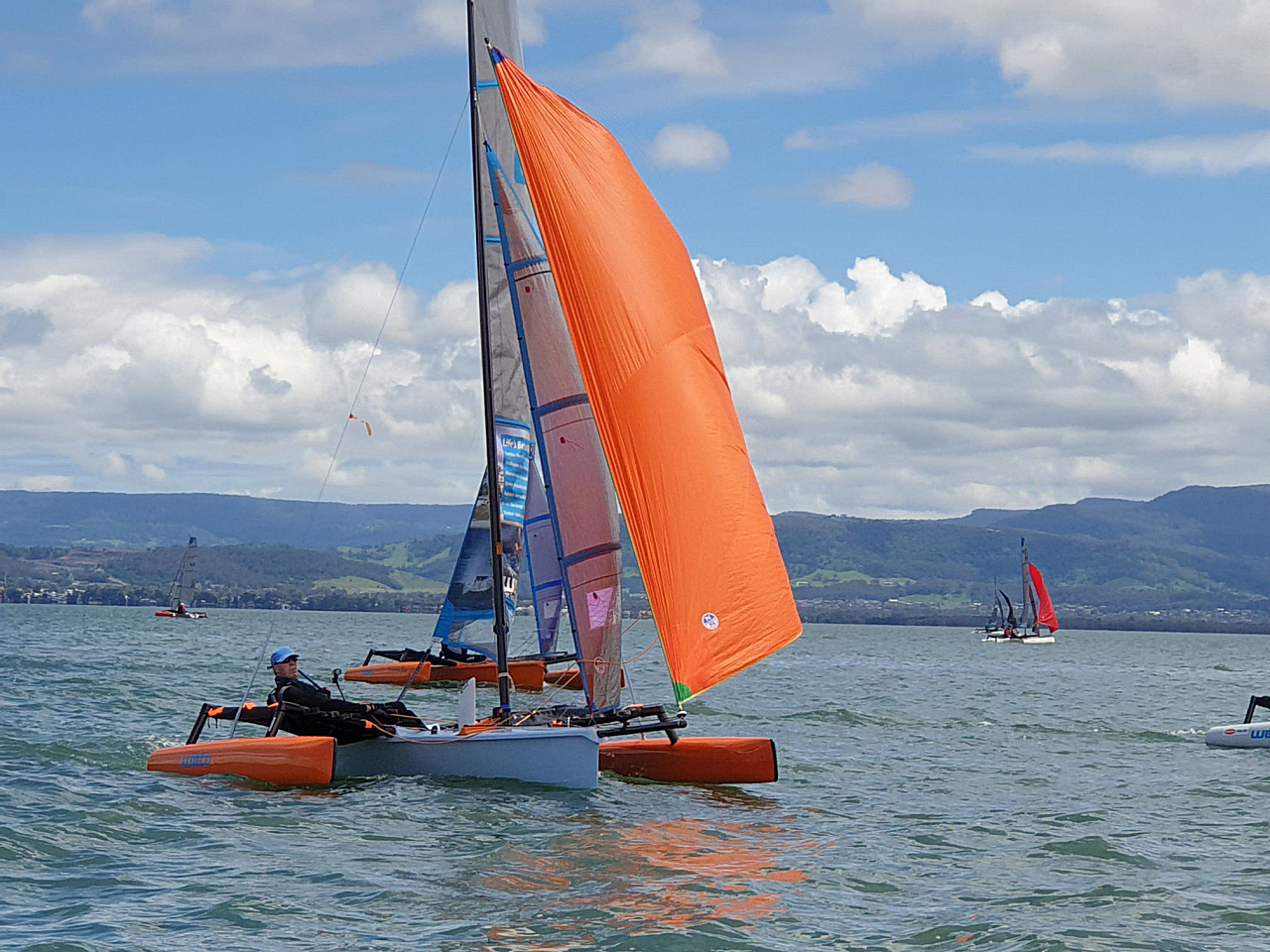 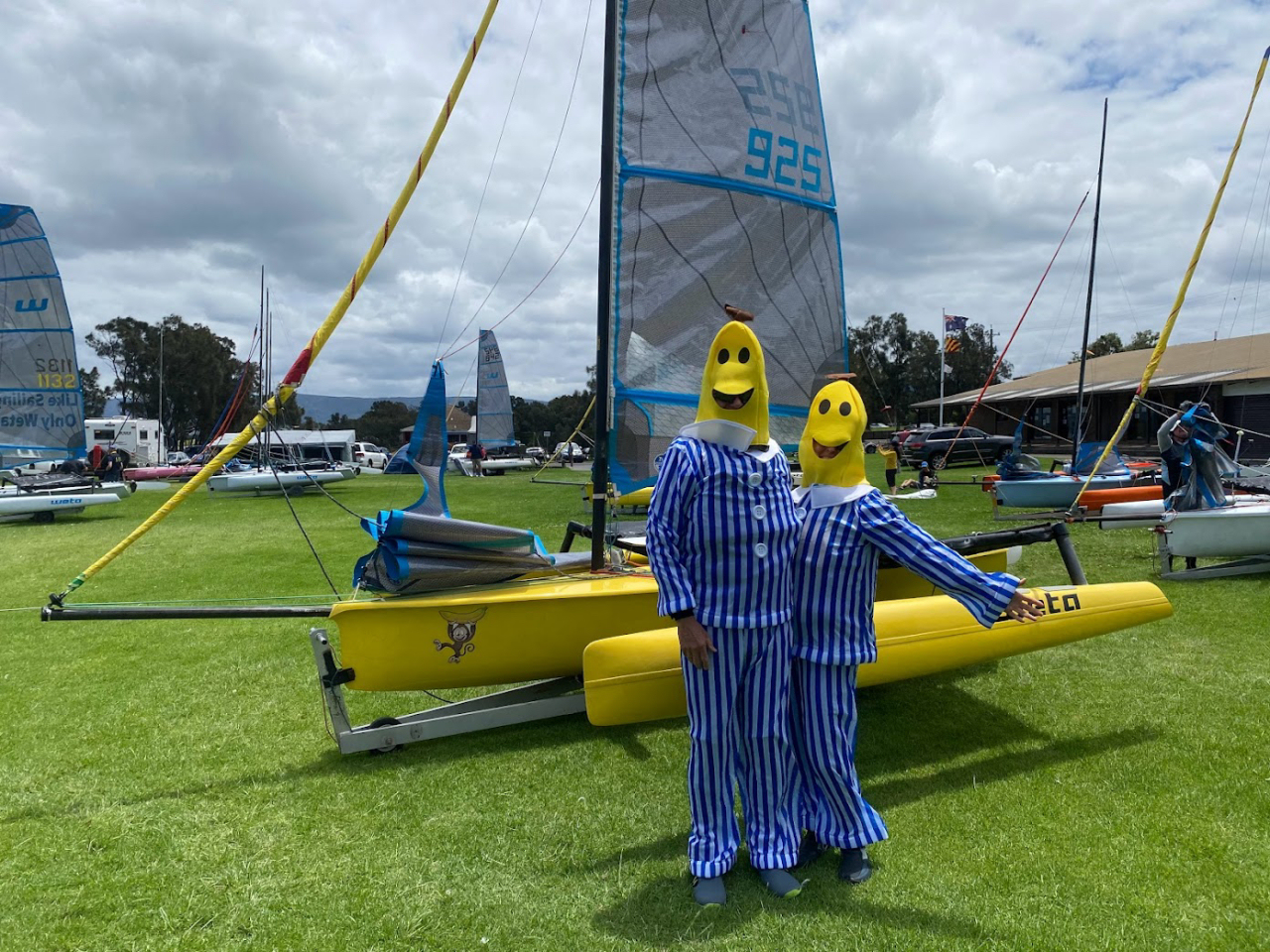 Bananas in Pyjamas on Go Bananas. 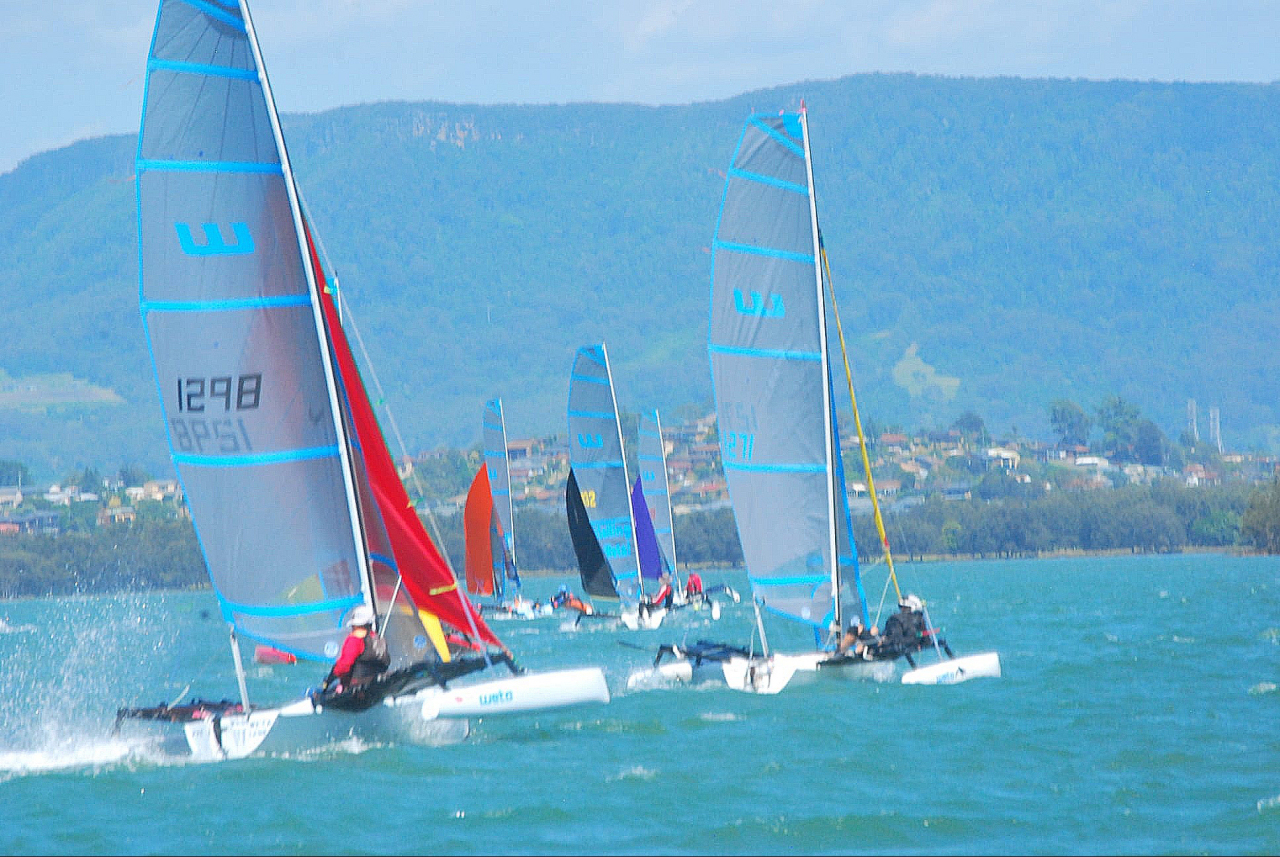 One up fleet on downwind leg. 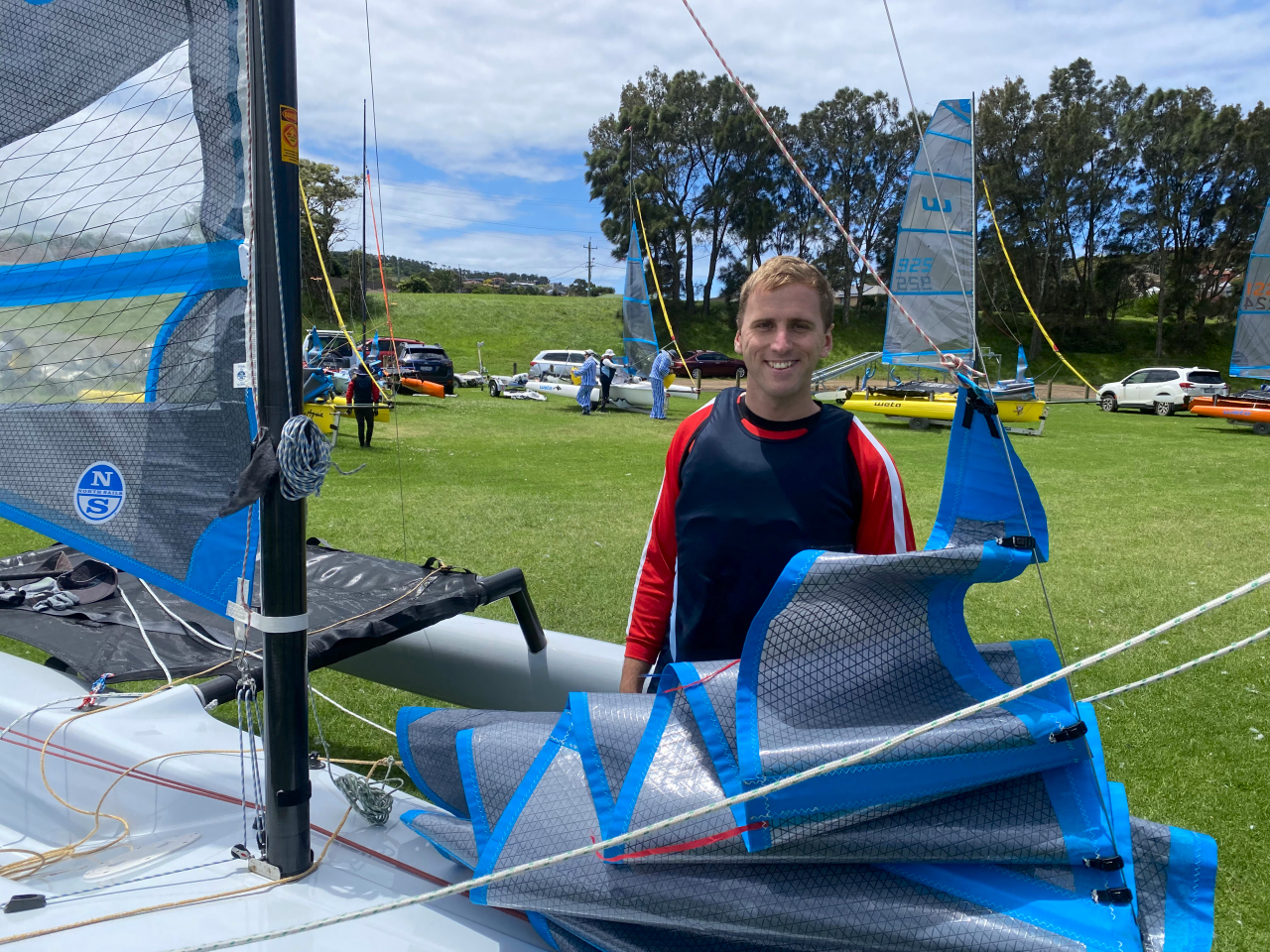 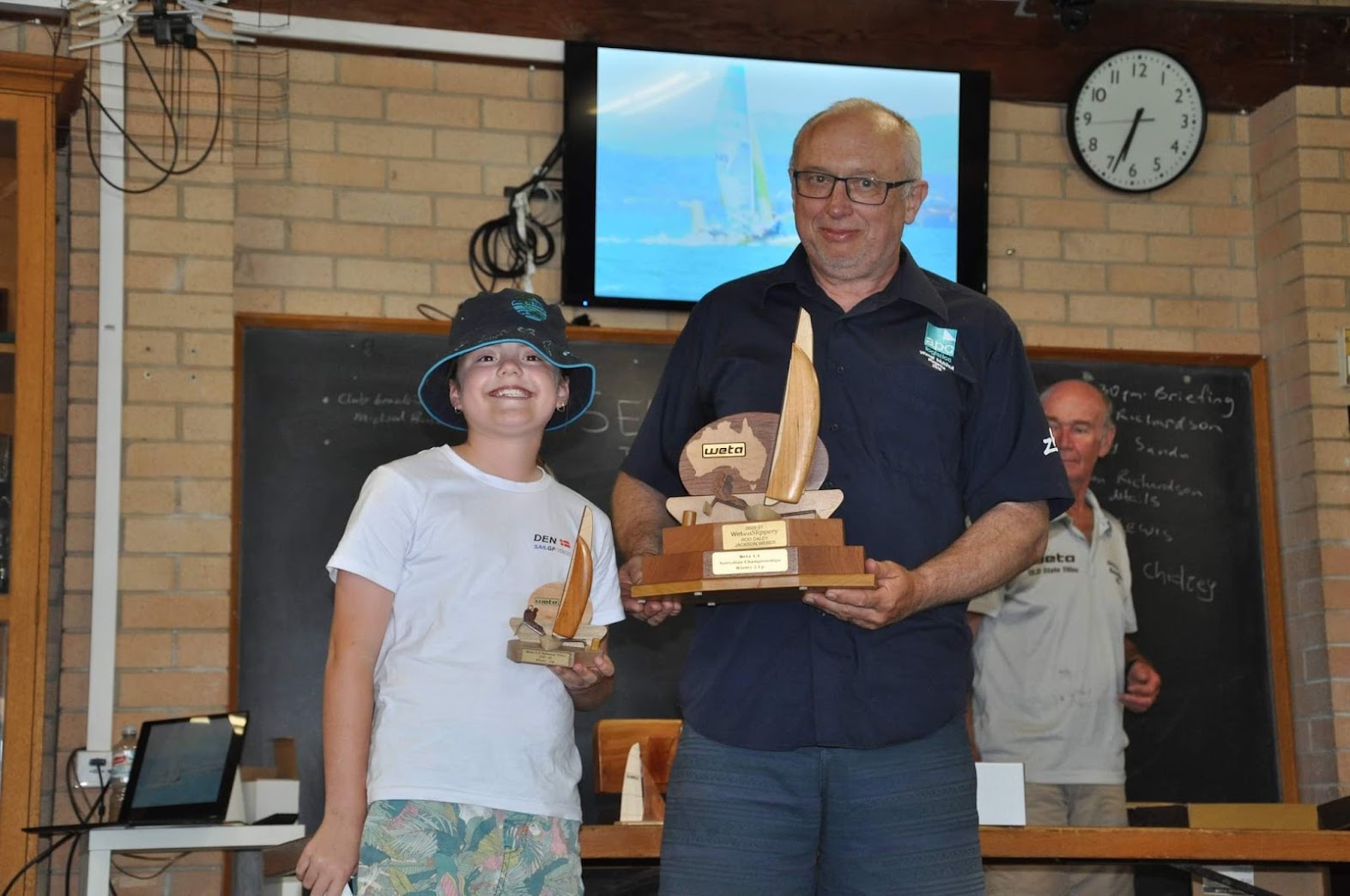 Keith Chidzey and Phoebe Branch - winners of the 2-up class

With issues around border closures looming, nineteen boats – including six sailed two-up – made it to Port Kembla Sailing Club on Lake Illawarra near Wollongong, NSW for the five day Weta Australian Championship held over New Year.

On the last day, it was feasible for three boats to win the one-up division. With a forecast for a 25 knot northeasterly sea breeze for the third day in a row, it was decided to race earlier at 11am and try to fit in as many as three races if possible.

The first race of the day started in a pleasant 15 knots, but by the time of the finish, barely 30 minutes later, it was well over 25 knots and gusting more.

One-up series leader John Richardson, while lying third in the race decided to try a pitch-pole and simultaneously to cut off his leg on the back of the centreboard. This would have certainly earned maximum Pickle Fork points for the day (for the biggest stuff-up), so Andrew Boyes from Victoria replied solidly with his own capsize to add to his existing tally.

With the increasing wind and capsized boats, the race committee decided that was enough action for one day and called in the ‘N over L’ (for lunch) flags and we all set out for the club, which was an effort in itself .

While there were lots of sends on the water – John Richardson was rapidly collected by a rescue boat and sent to hospital in a waiting ambulance. His parting words were: “Just as well racing was abandoned because I couldn’t carry a DNS”. At least he had his priorities in the right order – army dudes are made of strong stuff. The operation to fix the leg was delayed on his request, since pieces of the centreboard’s trailing edge were still embedded in his leg, which he wanted to retrieve for later repairs.

Overall, John Richardson of Port Kembla SC (PKSC) won the single-handed event by three points from Andy Duffield from Lake Cootharaba SC (LCSC) in Queensland and Ian Richardson (PKSC) a further three points behind. Keith Chisdzey with Phoebe Branch (Connell’s Point SC) took the two-ups. Tim and Karen (LCSC) were crowned the oldest combined age, as well as handicap winners overall – although the derivation of handicaps had some mystery attached.

The hotly contested and even more hotly debated Pickle Fork was indeed awarded to Andrew Boyes (Frankston SC), probably because the Victorians deserved something, since NSW won the Teams Trophy possibly due to sheer numbers – although the matching race bibs helped.

The on-water crew did an amazing job in the face of some very trying conditions – 45 degree wind shifts twice on day one and “NE hurricanes” following that causing several capsizes, severed limbs, sunken boats…much like a Pirates of the Caribbean movie. But unlike the movie, all boats were righted without assistance – although with a muddy choc top to show for it.

The Australian Weta Class is looking forward to Paynesville, VIC for Nationals three in January 2023 and hoping more members will be able to join in the fun, fast, easy annual regatta.

The New Zealand designed Weta is the fun, fast, easy boat everyone can sail. Expertly made for maximum enjoyment and minimum fuss, whether you’re sailing solo to the max, mixing it up with the family or teaching the kids to sail. The Weta is simple to sail, surprisingly quick, and an absolute tonne of fun – providing stable speed up to 20 knots.

Launched with a splash in 2009 and winner of the Dinghy of the Year award, over 1300 Wetas have been sold around the world. There are active racing fleets around Australia sailing solo or two-up. An evolving one-design class, recent developments include the self-tacking jib, twin tiller extensions and square top mainsail.