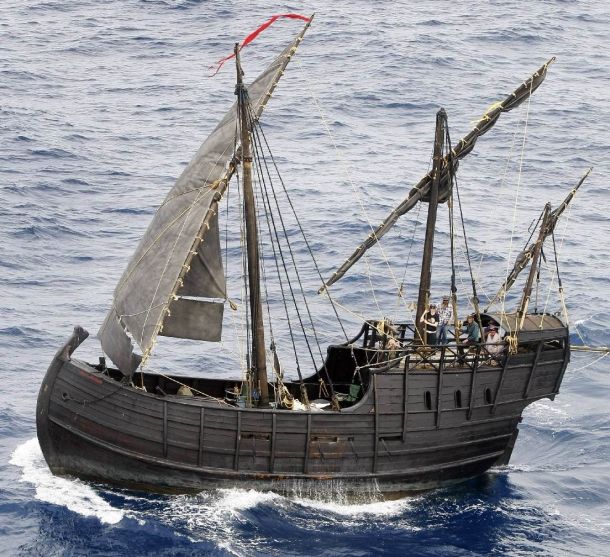 Built for speed - the caravel was a favoured vessel for treasure-hunting pirates in the 15th century. Photo GCIE.

It’s not every day you get to step aboard a rare replica of a 15th century Portuguese caravel – but you will be able to do exactly that throughout the four days of the 2015 Gold Coast International Marine Expo.

The unusual dark-timber vessel – the only one of its kind in the Southern Hemisphere – is Notorious, both in name and in nature. Indeed, the mere sight of a caravel’s sails on the horizon once struck fear into the hearts of landlubbers worldwide. It is said the caravel – understood to be the first ships to carry a transom and a rudder on a sternpost – could outmanoeuvre any other ship on the ocean. They also had large holds for cargo or, in many cases, treasure.

It’s little wonder they were favoured by pirates as they plundered their way across the seas!

The full-sized replica Notorious – weighing in at 58 tonnes – is based on a Portuguese design circa 1480. She was researched, designed and hand-crafted by self-taught shipwright Graeme Wylie over 11 years at his property at Bushfield, just north of Warrnambool, Victoria.

Graeme says he was inspired by the mysterious Mahogany Ship, an ancient coastal shipwreck said to be now lost in drifting sand dunes at Port Fairy. Local folklore also records a Spanish Galleon – but more likely a caravel – to be buried beneath the Eighteen Mile Swamp on North Stradbroke Island.

Graeme says such pioneer sailing vessels have disappeared worldwide and no building plans are believed to survive, if any ever existed. However, it is likely that the last time anyone on the Australian coastline spied a genuine caravel was probably about 500 years ago.

Historians have argued the issue for many years but Graeme says it is impossible to believe Portuguese explorers travelled 4000 miles to Timor, then did not travel 150 sea miles south to discover Australia. “They must have known it existed, but probably simply weren't interested – there was nothing of obvious value to them there, like gold,” he said.

Event & Marketing Manager Emma Milne said the addition of Notorious to the fun family attractions was another coup for the Expo – a showcase of ‘all things aquatic’.

“Expo visitors will be able to step aboard Notorious and venture down below to see this remarkable full-scale replica caravel,” she said. “We have many more exciting announcements scheduled for the next 16 weeks in the countdown to Expo including new product and boat launches, new initiatives and new attractions.