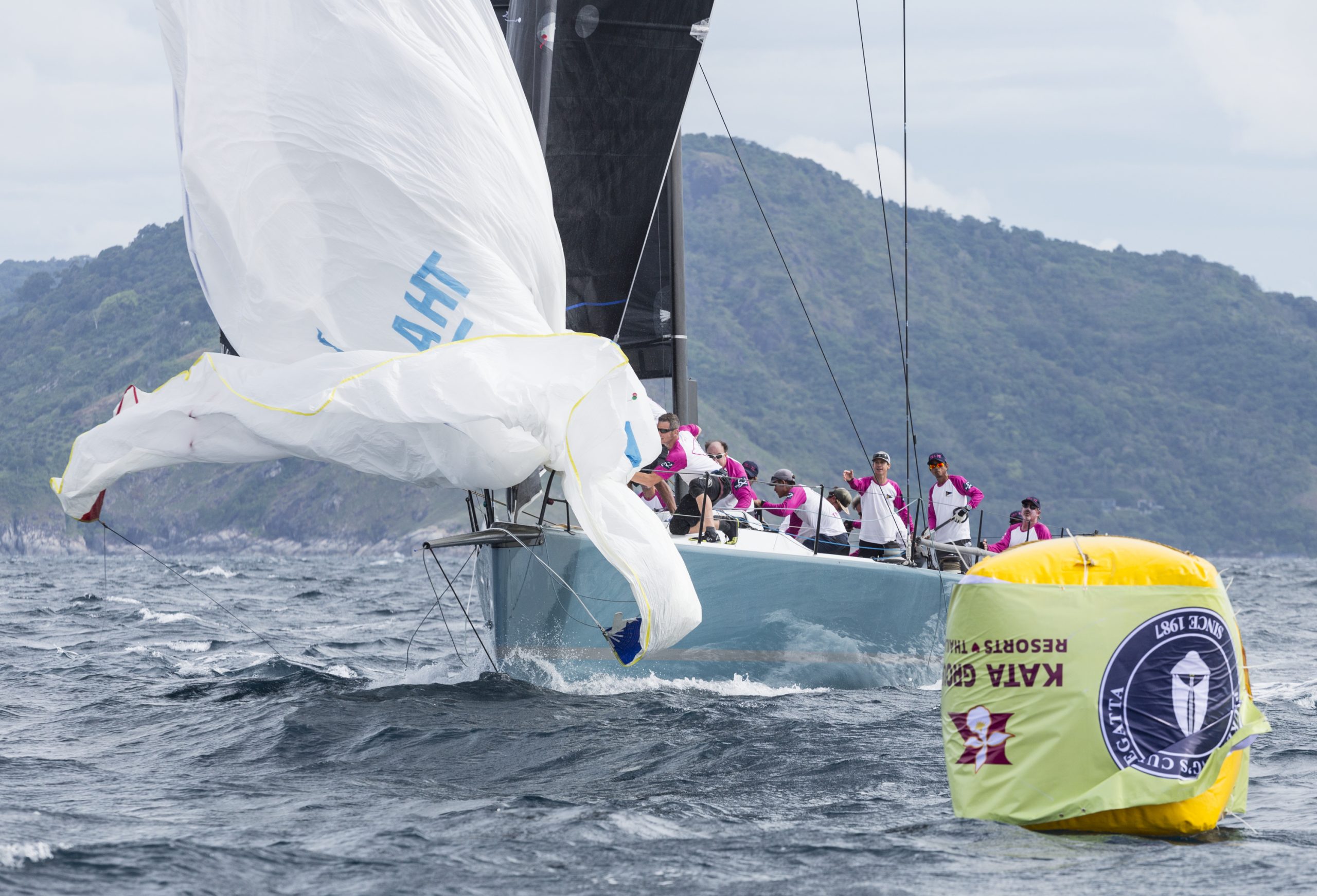 Bangkok/Phuket, 4 December, 2017 – The exciting prospect of week-long strong winds and fast sailing conditions is extremely tantalizing, and Phuket looks set to deliver as promised. Race Day One kicked off with some of the best conditions seen at the PKCR in recent years, winds around 19 knots, and more of the same hotly anticipated for tomorrow. A total of 83 keelboats and multihulls took to the waves, which at times bordered on straight-up rough ‘n’ tumble (and some collisions).

Making hay while the sun shines, every class put in as many runs as possible. Many teams also put their faith in fast running today, and it was a gamble that paid off. Kevin Whitcraft’s THA72 Thai team won the opening three races in IRC0. In IRC1, Japanese team Karasu and Singapore-sailed Loco shared a win each, before Yasuo Nanamori’s team took the third race. IRC2, this year incorporating Open Charter, saw Peter Dyer’s Kata Rocks (Madam Butterfly) winning all three races. Full classified results are available here.

Jaray Tipsuk, Helmsman of Thai boat THA72, was still beaming after an exhausting day, saying, “Winds were very good, conditions were extremely fast all day. We’ve just bought a new jib so we’re set up for very high speed, but we never tested it before! It’s obviously performing well for us. Our team is very ready following an exhaustive practice schedule at similar speeds. We’re fast reaching downwind, not so much when running. Our techs have really concentrated on briefings in-depth, on how we can improve, so everything is well planned and well drilled. We have a step-by-step approach which delivers a crew that is focused and clear, so we work smoothly together. We want the same wind tomorrow! Our main rivals I think are Windsikher or Team Hollywood, and we did consistently well in all three races today as we got a better start time and time again. We now get back to planning, repairing and maintaining, which is an everyday thing. There is always something to work on”.

Ithinai Yingsiri, Skipper of Pine Pacific, which finished second in Premier Class behind rivals Antipodes, said, “This is the sixth year that Pine-Pacific, an X-Yachts X-55, has raced in the PKCR. However, most team members raced with ‘Lawana’, another famous Thai team boat for many years. We’ve won 1st in Premier Class for the last 4 years but were expecting a competitive year this year as we are racing against many good teams. This is a very good event with an impeccable history – it is a very good ‘product’, but the organizer needs great support from various parties such as local government, sponsors and sailors. Everyone in the sailing community should do our best to support and encourage the organizer, and they do so, because this is a superb regatta”.

Kevin Whitcraft, speaking in his role as President of the Phuket King’s Cup Regatta Organizing Committee, said, “The opening of the 31st Anniversary will be remembered for its gusting wind conditions which lasted throughout the day. In fact, you could say that today’s opening day wind conditions were the stuff of dreams for sailors and spectators alike. On behalf of our officiating and organizing teams, it’s massively rewarding to be able to see such a large fleet made up of some of the biggest racing sailboats giving it their all in these challenging conditions”.

Today’s racing followed festivities last night wherein the flag was hoisted and the bell was rung marked the beginning of an epic week of King’s Cup racing. Over 83 keelboats and multihulls from 20 countries split via 11 classes (and 71 dinghies) have joined the 31st Anniversary race, with more than 700 sailors and support crews joining the opening evening event following the ceremony. Beyond Resort Kata hosted a beachside party which proved to be an ideal match to the great sailing conditions seen today. Everything is in place for a memorable Regatta year and more of the same tomorrow would be a wish come true.

In the Dinghy fleet competition, Jedtavee Yongyuennarn was quickest in the Optimist Boys, with Patcharee Sringam fastest of the girls. Keerati Bualong was victorious in Laser Standard, with Patteera Meeyousamen taking the 4.7 Class. Manat Photong achieved success in the Laser Radial while Adisak Kingkaew and Kanchai Wongpaduang won out in the 420’s. The PKCR Dinghy Class is proudly supported by the Government Lottery Office, and the organization is pleased to see the level of ability and enthusiasm among young Thai sailors growing year by year.