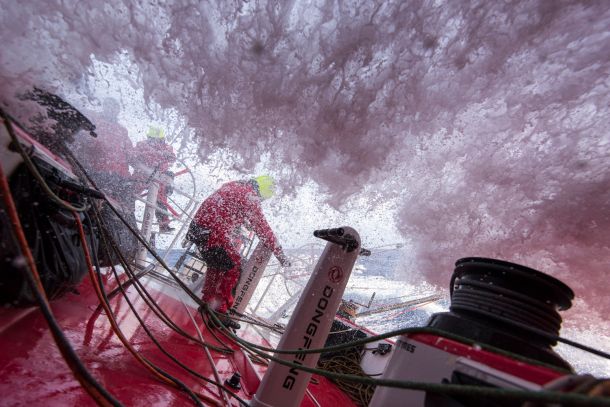 ALICANTE, Spain, May 6 – Dongfeng Race Team (Charles Caudrelier/FRA) felt the familiar presence of Abu Dhabi Ocean Racing (Ian Walker/GBR) to their stern on Wednesday as the thrilling Leg 6 of the Volvo Ocean Race headed for a potential ‘photo finish’ in Newport, Rhode Island.

The Emirati boat, overall race leaders with seven points to spare from Dongfeng, have stuck to Caudrelier’s crew like glue for the last 24 hours. The arch rivals were still just over 150 nautical miles (nm) from the finish of a 5,010nm stage from Itajaí, Brazil, at 0940 UTC on Wednesday after nearly 17 days of head-to-head racing since setting out on April 19.

Dongfeng Race Team held a narrow 6nm lead, but the final few hours before a probable Thursday morning finish could yet upset their hopes of a second stage victory following their Leg 3 triumph sailing to their home port of Sanya back in late January.

The boats are shortly exiting the Gulf Stream in good winds and will sail into reaching conditions of some 18 knots, the Race’s official meteorologist, Gonzalo Infante, reported on Wednesday. They will then run into squally conditions, again with gusts of around 18 knots, before the westerly wind which is driving them turns north-east late afternoon/early evening UTC time.

Towards the end of the day, between 2100-2400 UTC, the boats will run into a relative brick wall in the form of a cold front for the last 30nm or so from Block Island onwards. That could finally split the two – laterally at least – when they opt to go east or west and the decision could make or break either of them.

No wonder, then, that Infante is predicting: “We could be in for a photo finish.”

The three boats behind them – Team Brunel (Bouwe Bekking/NED), MAPFRE (Xabi Fernández/ESP) and Team Alvimedica (Charlie Enright/USA) (see panel above) – were still battling desperately to stay in touch in the hope that either of the front two could make an error in the final straight.

Meanwhile, at the back of the fleet, Team SCA (Sam Davies/GBR) lost significant ground in the last 24 hours with all hope of a first podium finish seemingly lost.

The mood on board Azzam is of high excitement. Abu Dhabi Ocean Racing have already won two legs including the toughest of them all, Leg 5 through the Southern Ocean, and are hungry for another. Their onboard reporter, Matt Knighton, summed up on Tuesday night: “Right now we need to pull out all the secrets we’ve got. In the breezy downwind conditions of the darkness, they’ve (Dongfeng) managed to sail lower and faster towards the mark and extended to 3nm ahead.

“We’ve found at least 10 rabbits in this magic hat of ours this leg – we just need to find one more.”

The boats will spend 10 days in Newport, hosting the race for the first time, before heading back across the Atlantic to Lisbon in Leg 7 on May 17.