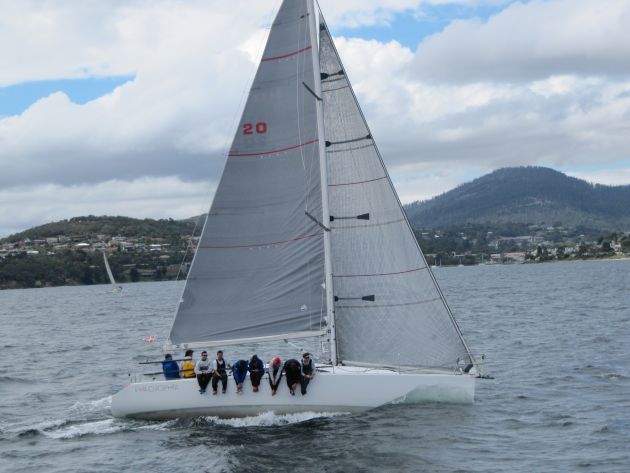 King of the Derwent

Shaun Tiedemann’s Philosopher yesterday proved herself to be this summer’s champion yacht of Hobart’s River Derwent, outsailing a crack fleet to become King of the Derwent for 2016.

With Shaun’s son Sam on the helm, Philosopher was named King of the Derwent after winning the IRC handicap category of the National Pies King of the Derwent regatta. The yacht, its owner and young crew of ex-dinghy sailors, are now off the Geelong to compete against some of Australia top racing yachts in the grand prix racing division at the huge Festival of Sails on Corio Bay.

A fleet of 41 Sydney Hobart, Melbourne to Hobart and Launceston to Hobart and local harbour racing yachts contested the KOD, 15 in the major IRC rating category.

In the PHS category, first place on corrected time went to one of the smallest boats in the fleet, Malcolm Cooper’s Kaiulani from Michael Hutchinson’s Emotional Rescue and Young One.

While Philosopher collected the silverware as King of the Derwent, Tasmania’s current biggest and fastest racing yacht, the Reichel/Pugh 66 Alive, swept all before her in a stunning line honours victory.

After a week of mist, rain and fog, Hobart turned on perfect weather for the National Pies King of the Derwent, with 41 starters and a large spectator fleet.

Owned by Derwent Sailing Squadron member Phil Turner and skippered by Duncan Hine, also a DSS member, Alive does most of her racing in the Pacific, Queensland and South East Asia.

In the years that Alive contests the Sydney Hobart, the owner keeps her in Hobart to do races such as the KOD and the historic Bruny Island Race.

In yesterday’s KOD fleet there were few boats that could match her upwind power in the 16-18 knot sea breeze, nor her downwind running under massive spinnaker.

In a spectacular example of power sailing, Alive took line honours by a huge margin of almost four minutes from Gary Smith’s The Fork in the Road and Wayne Banks-Smith’s War Games. On corrected IRC ratings, Alive placed sixth.

After a week of mist, rain and fog, Hobart turned on perfect weather for the National Pies King of the Derwent, with a total of 41 starters and a large spectator fleet.

The King of the Derwent was the last of three races that comprised the National Pies Series, the others being the Beauty Point to Low Head Dash and the Launceston to Hobart.

In the PHS division, Malcolm Cooper’s Kaiulani won the series from Emotional Rescue (Michael Hutchinson) and Young One (Gerard Smith).