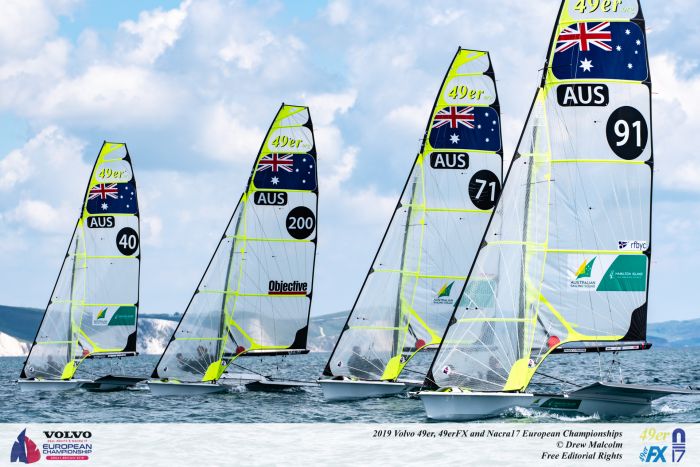 The Australian Sailing Squad’s Will and Sam Phillips have kept the momentum of yesterday’s top results going at the 49er European Championship in Weymouth, UK, today moving up to third place on the leaderboard after three further races were completed.

Weymouth, home of the 2012 Olympic Sailing Competition, is hosting the 49er, 49erFX and Nacra 17 European Championships where the Australian Sailing Team has a presence in all three classes.

The Victorian Phillips brothers finished second in all three races. They are on 10 points; two behind the Spaniards Diego Botin/Iago Lopez, and three behind Olympic 49er silver and gold medallists, Peter Burling and Blair Tuke (NZL), who won all three races of the day. “We were behind them in each one. One race was very close with them,” Sam Phillips said.

“We had a little bit more wind than yesterday, up to 2 to 4 knots more. It made the beat tougher to control.

“The first two races were a couple of knots more than yesterday and picked up more in the third and boats were capsizing downwind. It became survival mode; it was upper limit. Those who didn’t go in did well. It became important just to keep the boat upright while still trying to stay in phase with the wind and keep the boat going fast,” Phillips said.

Starting well in all three races, Phillips said, “We then had to try and stay in phase with the breeze the whole time. The racetrack was a bit more open with more shifts, so watching the compass upwind and sailing on the lifting tack throughout the first two races was important.”

Phillips said he and Will are “reasonably happy” with their results after two days, but he warned: “There is still a long way to go. We just have to stay in the hunt and avoid the big scores. We had a big score up front, so we’ve been a little bit more conservative in our sailing.”

Of the other Australians in the class, Kurt Hansen and Simon Hoffman are now the next best placed in 33rd place, while brothers David and Lachy Gilmour have dropped down to 41st, scoring all double digit results. Thomas Needham and Joel Turner are 42nd, while Jim Colley and Shaun Connor also dropped down and are now 48th overall.

“It was tough conditions out there for everyone, but the good guys managed them well,” 49er coach, Euan McNicol, offered.

In the 49erFX, Natasha Bryant and Annie Wilmot have shaken off their UFD of Race 2, instead capitalising on their second place in yesterday’s final race, by scoring a pair of ninth places and a 13th. They have skyrocketed up the leaderboard from 31st to 18th overall.

Behind them, Amelia Stabback and Caitlin Elks have dropped once spot to 28th, their best place a ninth in Race 6, the last of the day. Tess Lloyd and Jaime Ryan are 29th, their most positive result a fifth in Race 5. The class has completed six races and a drop has come into play.

Racing in the Nacra 17 was initially postponed because of high winds. Starting late afternoon, the class sailed in 13 knots that dropped to around 11 knots. Nathan Outteridge, the gold and silver 49er Olympic medallist, is adjusting to the boat he has not raced for a while, scoring 5,9,5 results with sister, Haylee, to move up to 14th place overall.

Fellow Australians, Paul Darmanin and Lucy Copeland, were in good shape until breaking the spinnaker pole in the second race of the day.

“They sailed the last half of the last downwind leg without a spinnaker,” coach and Olympic medallist Darren Bundock said. It meant they were unable to sail the final race of the day, causing their fall to 22nd overall.

All crews at the three Championships are racing in their respective Qualifying Series’, followed by three days of fleet races, ahead of the Medal Race for the top ten in each of the classes on 19 May. For all fleets, seven Qualifying Series races are required to be completed to constitute a series.

The Australians in Weymouth are facing the world’s best as they strive towards selection for the 2020 Tokyo Olympic Games.