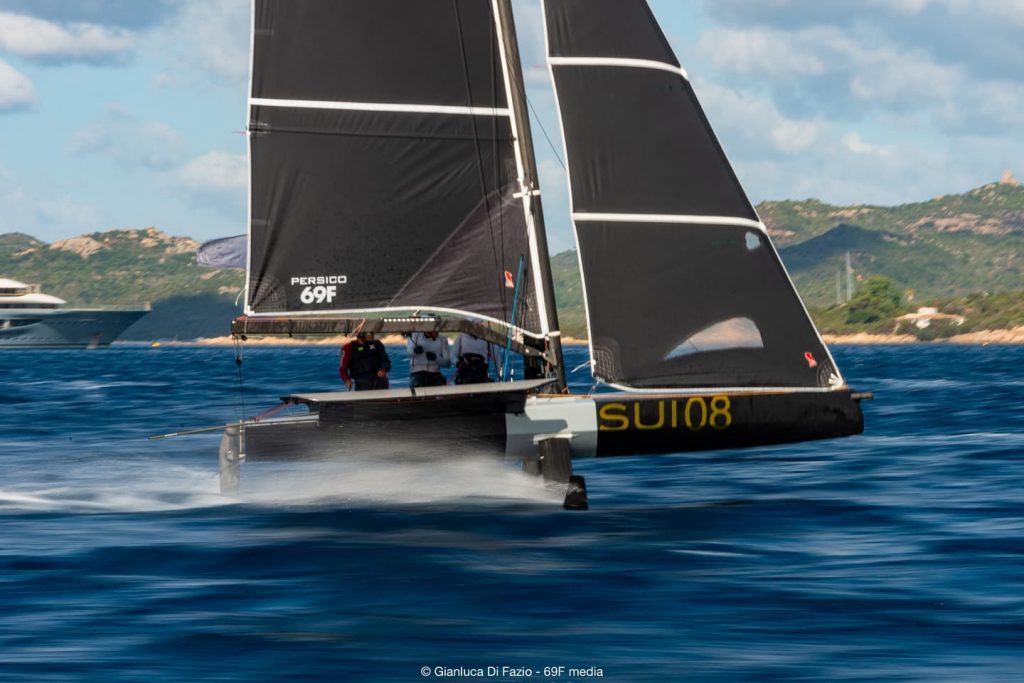 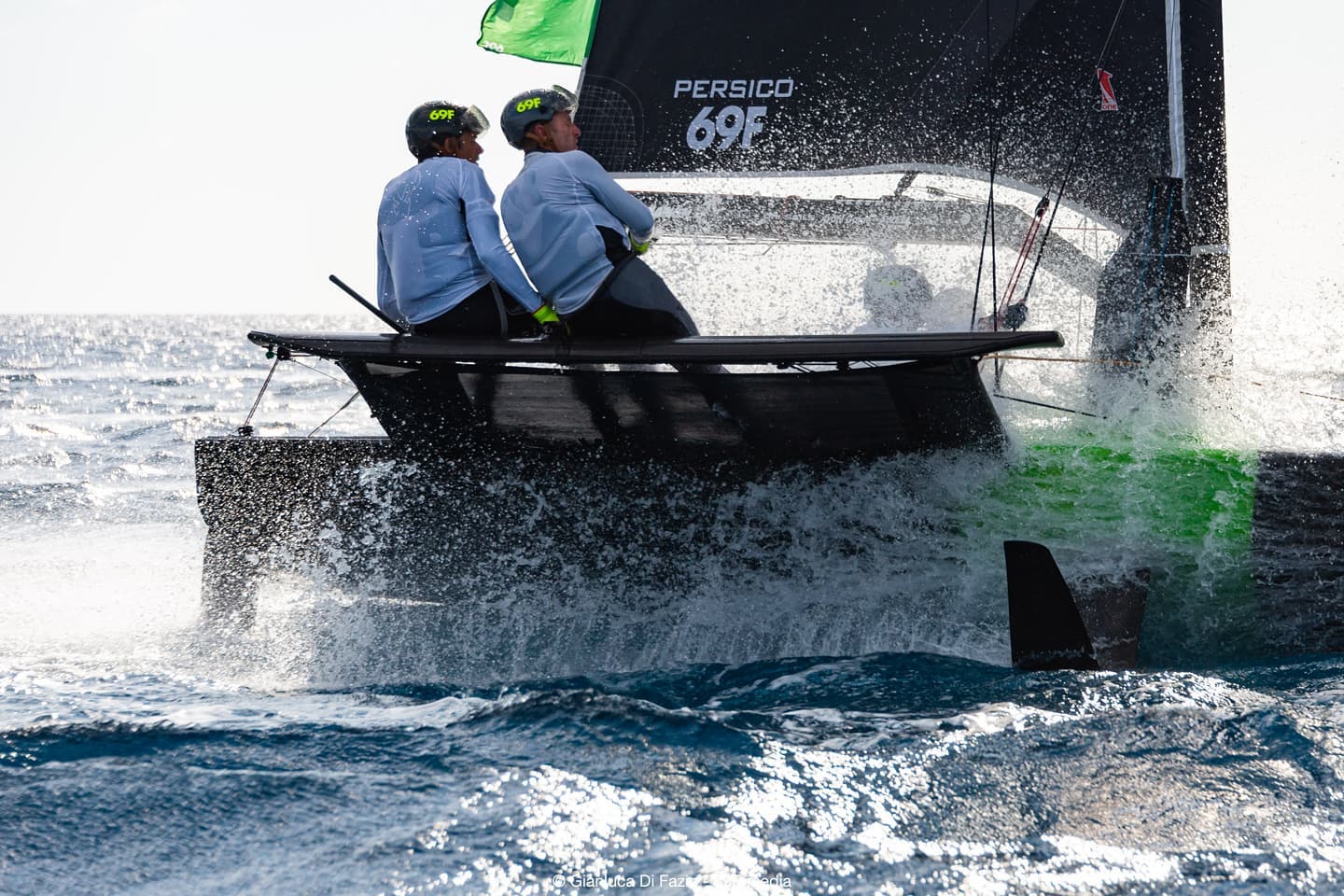 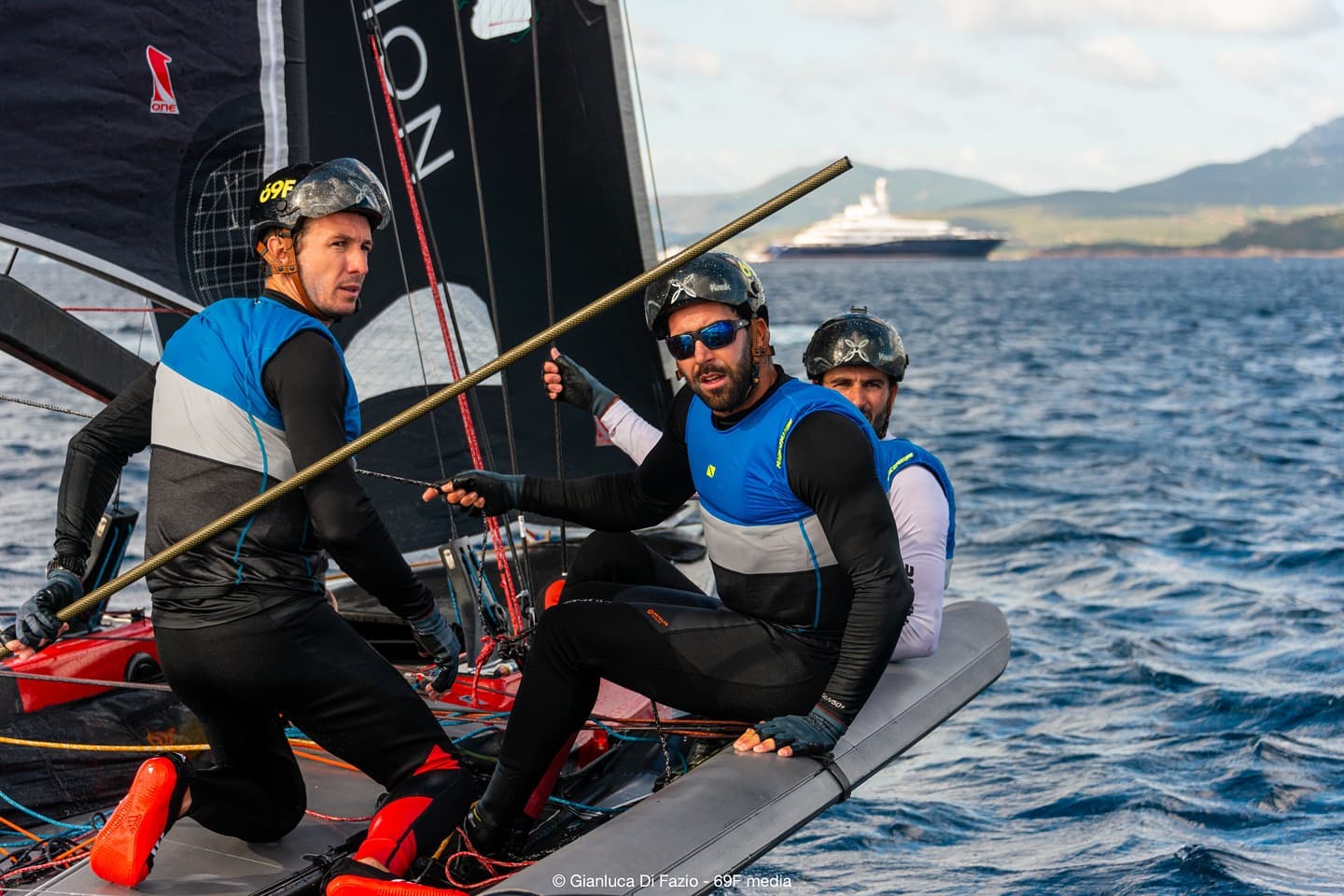 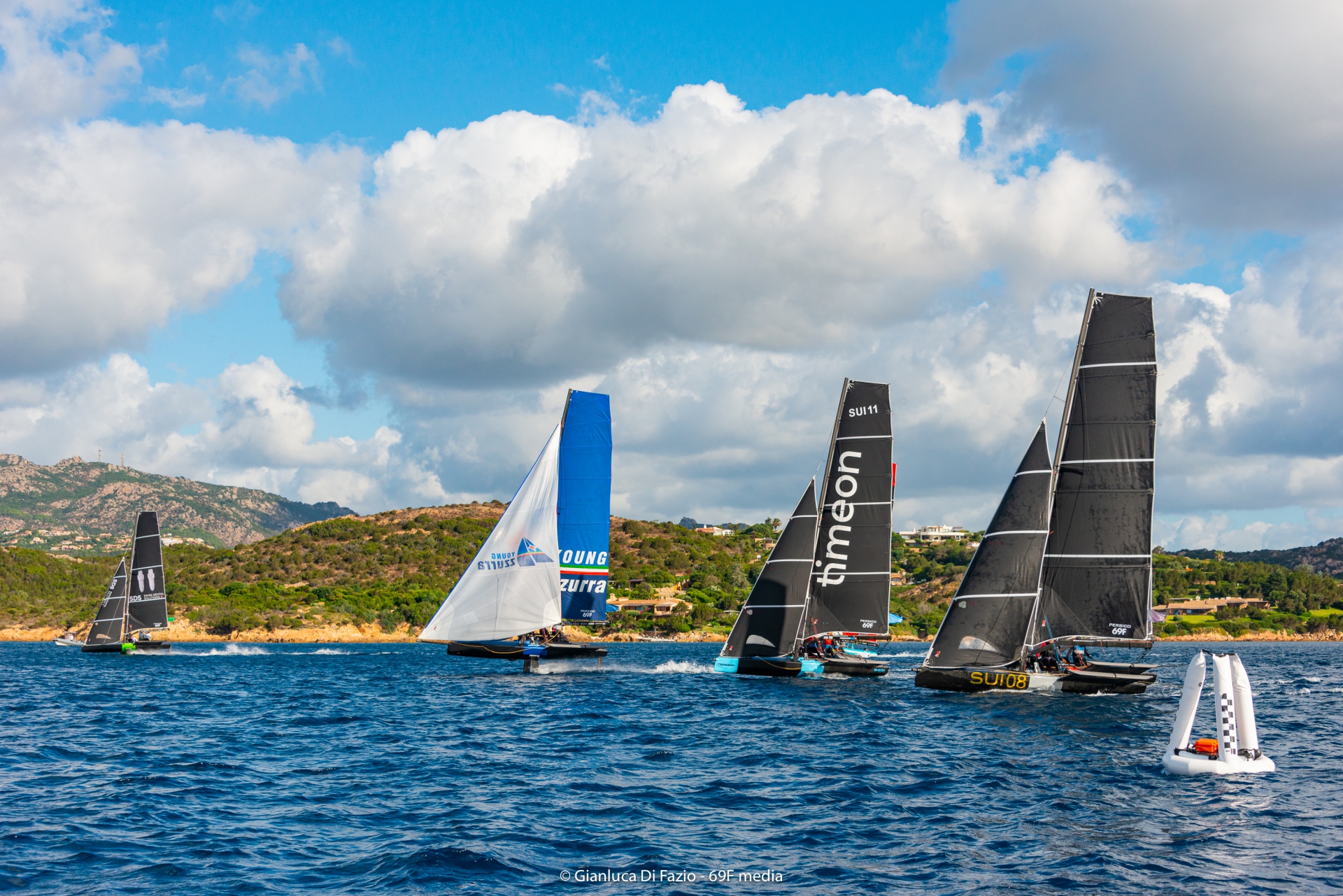 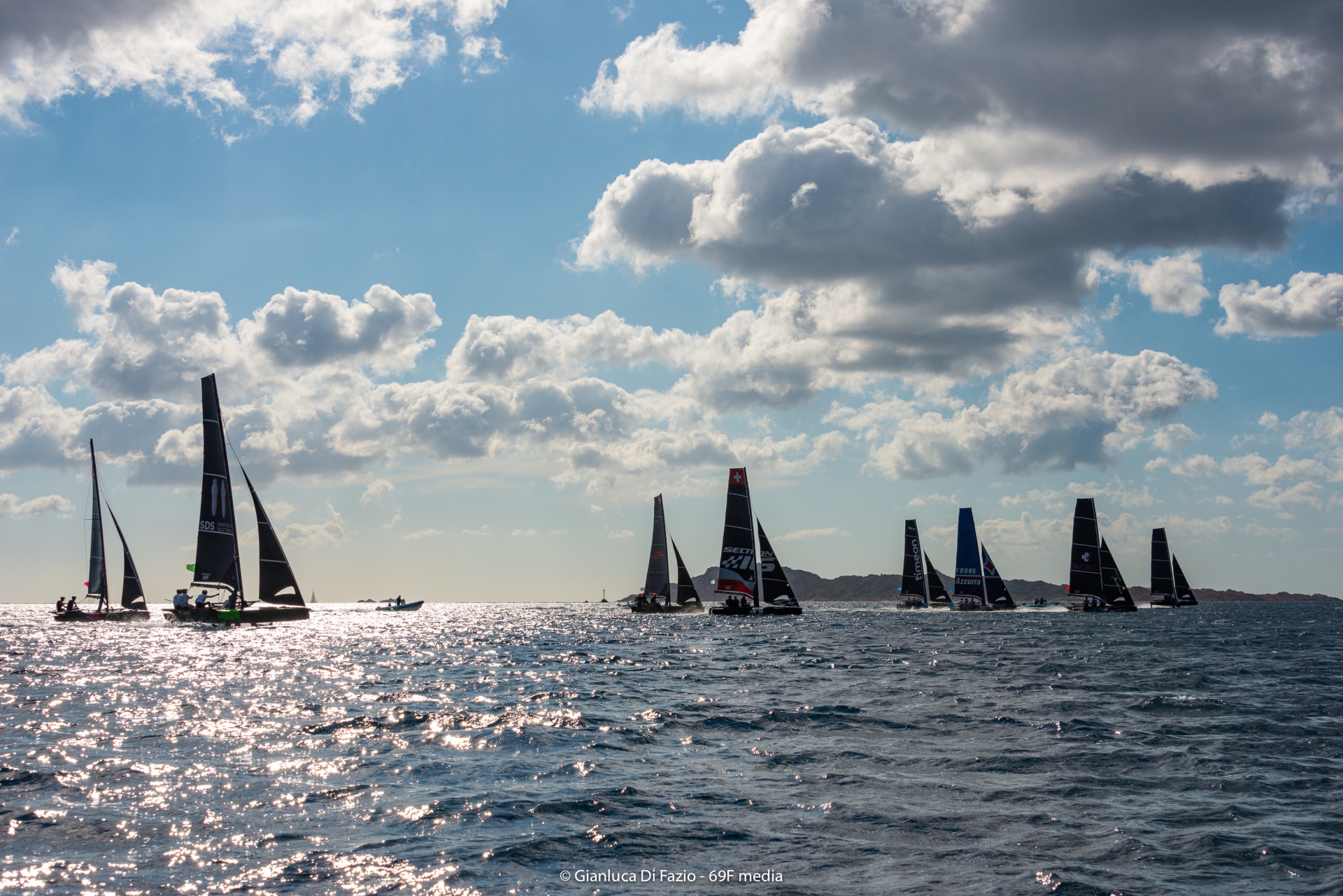 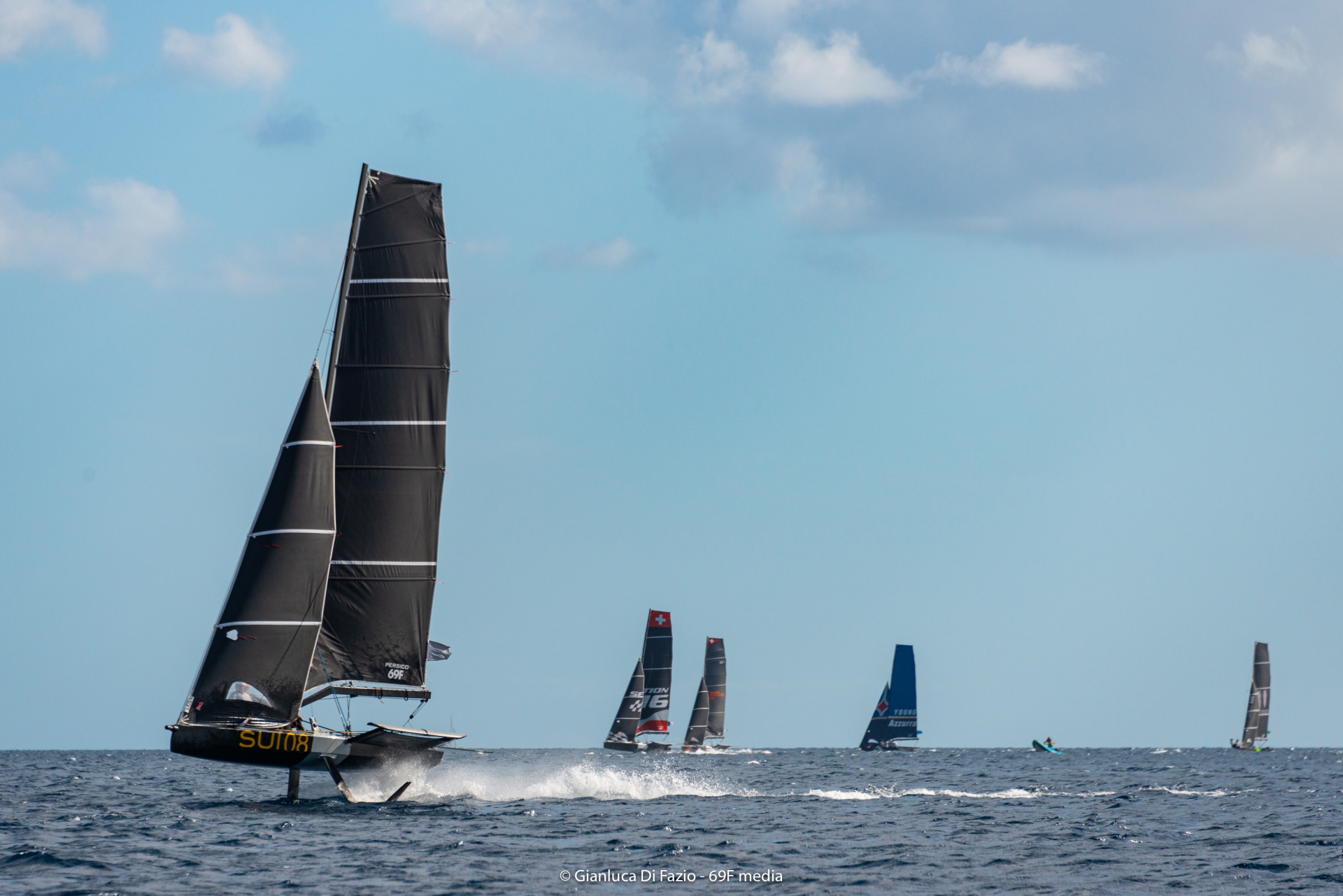 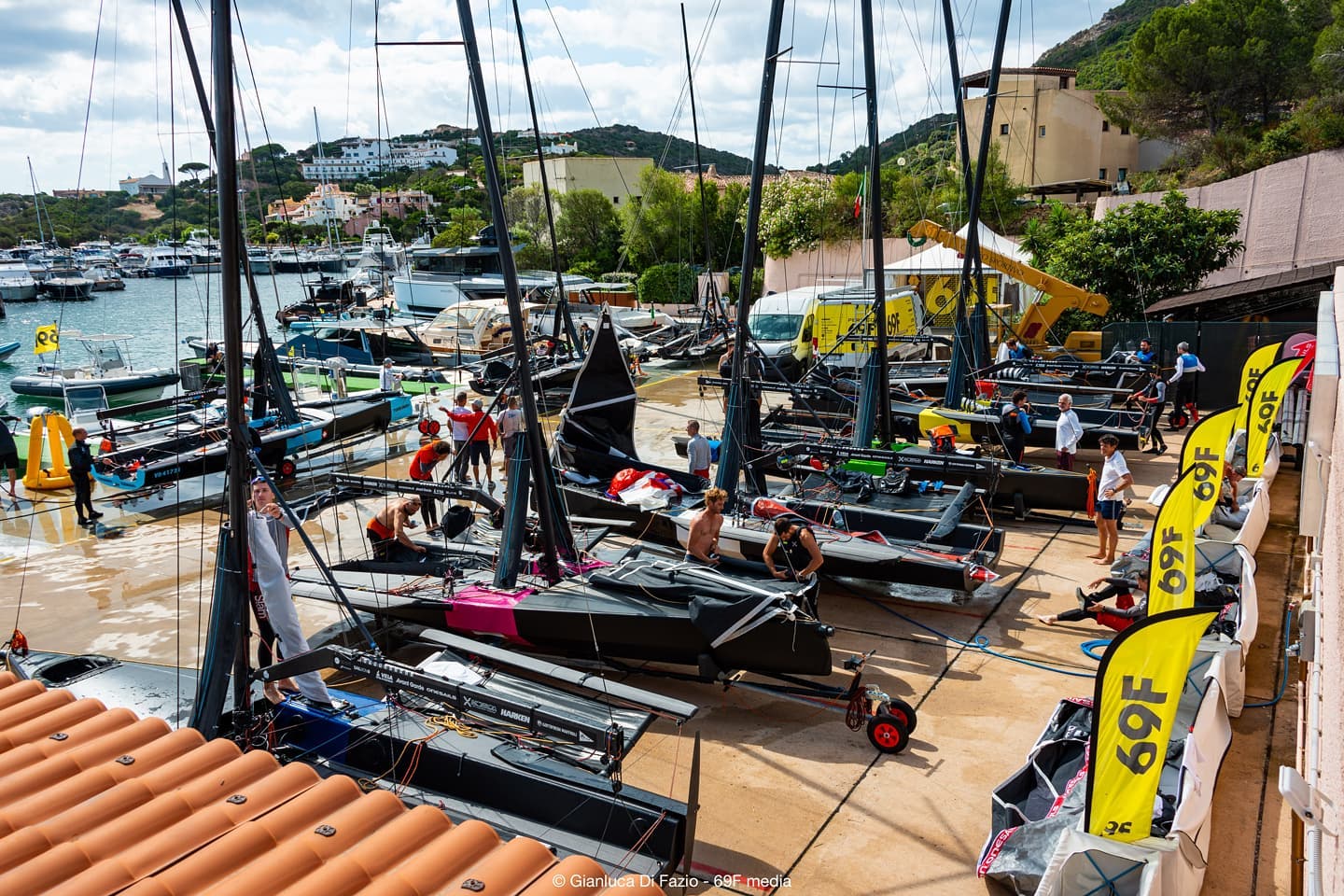 Costa Smeralda, Northern Sardinia, Italy: It was an early race start for day 1 of the Persico 69F Grand Prix 2.2 (the second foiling event in Costa Smeralda), and the provisional rankings are extremely close with the Swiss Okalys Youth Project in the lead followed by Groupe My Ambition, Sailing Performance and Young Azzurra, all on equal points.

The typical Sardinian mistral wind blew hard yesterday, reaching 33 knots at times, and the Race Committee took advantage of a brief decrease in intensity at around 8 a.m. this morning to kick off the first two races of the event on the regatta course in front of Romazzino beach, with a wind that built from an initial 10 knots to reach 18 knots.

Young Azzurra, winner of the recent Grand Prix 2.1 event, opened the day with an excellent result, taking victory in the first race. The team rounded the first mark in the top spot and went on to cross the finish line ahead of the fleet, with a comfortable lead over Switzerland’s Okalys Youth Project in second. In the second race Young Azzurra failed to find enough room on the starting line, blocked by the other eight teams in the competition. With a sixth-place finish, the team now sits in fourth in the overall provisional classification.

Federico Colaninno, flight controller on Young Azzurra said, “It was a decent day for Young Azzurra. We started with a first place and closed with a sixth. In the first race we got off the line right away while in the second we got stuck, racing with eight other boats is not simple. It is important to be able to get out in front immediately at the start so you can sail in clear air. We have two days ahead with good weather conditions, we hope to be able to complete as many races as possible to make up ground.”

Consistency brought rewards for Okalys Youth Project, who are currently sitting at the top of the leaderboard thanks to their second place and a third in race two.

Team Balthasar, after a ninth place in the first race due to a capsize, came back in style in race two. They crossed the finish line in first place ahead of Sailing Performance, the other Swiss team in the fleet.

Henri Demesmaeker, from team Balthasar said, “In the first race we finished in last place while in the second we won. It takes very little, the smallest error, to compromise the result. You have to stay constantly focused and alert, especially with these weather conditions. Our team is absolutely primed for the next few days. The weather forecast is good and there will be many more races to face. Fair winds to everyone!”

Following Okalys Youth Project in the provisional overall rankings on equal points are Groupe My Ambition in second place, with a 4-5 scoreline for the day, and Sailing Performance in third place.