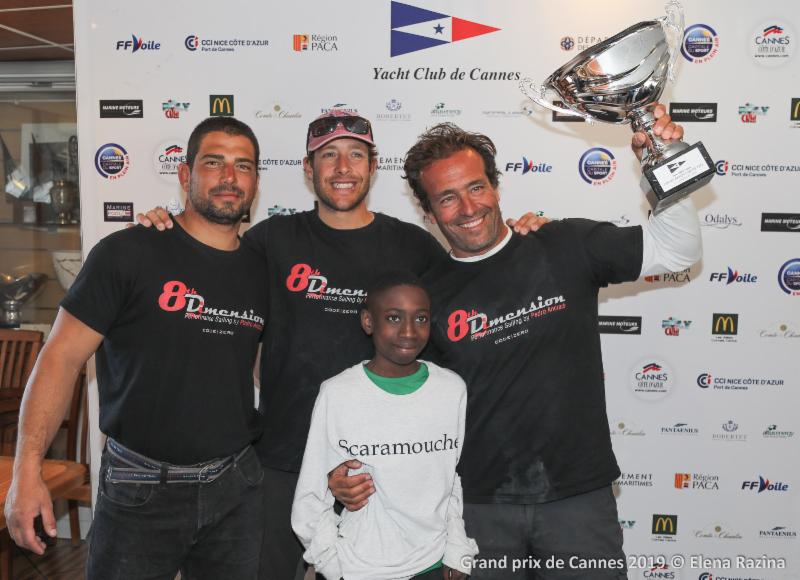 Cannes, France: The 2019 Dragon Grand Prix Cannes concluded in style at the Yacht Club de Cannes with one final race in superb conditions to decide the winner.

Going into the day just ten points separated the top six teams so the scene was set for a nail-biting showdown and the fleet did not disappoint.

After a delay to allow the wind to fill in, race five started in sunshine and 15 knots from 190 degrees, then gradually clocked right to 210, building to 27 knots by the finish. With the points so close there were some tricky decisions to be made for regatta leader Pedro Rebelo Andrade and a conservative approach was needed.

While Germany's Stephan Link, Britain's Grant Gordon and Russia's Yevgen Braslavets romped away to finish first to third respectively, all eyes were locked on the battle between Portugal's Andrade and his nearest rival, Thomas Müller from Germany, who had just two points between them.

Initially Müller looked to have the upper hand, but a jib furler malfunction saw him forced to take on the second beat with his genoa only partially open. Müller is one of the most experienced helms on the circuit with World, European and Gold Cup Dragon titles to his name.

Müller and his crew of Dragon World Champion Phillip Malte and Markus Koy, a veteran of four Olympic campaigns, the Valencia America's Cup and a three time Star European Champion, quickly figured out a solution. But the brief falter was sufficient to allow Andrade to pass them and they crossed the line in sixth and seventh places respectively.

Back ashore Andrade was fulsome in his praise of his fellow competitors and his crew “I think I have to say that I profited from the misfortune of some of my biggest opponents. First of all Grant Gordon was leading a race and the wind dropped off and the race committee had to abandon, and then the next day he was Black Flagged.

“Again today Tommy is sailing so well and at one stage at the end of the first beat I thought that was it and we weren't going to catch him at all. But we had a good run, we were quite fast downwind, and then he had an issue on board with the genoa and we profited again. The boys I am sailing with haven't sailed much in the Dragon, but they are fantastic sailors and I am really happy with them and it made my life easier.”

For 13 year old Kacey Marfo this week's experience of racing with Andrade has been an extraordinary contrast to his usual life as a school boy at the Greig City Academy in one of London's most deprived districts.

Marfo is part of the Scaramouche Sailing Project, which uses sailing to benefit under privileged children, and after the prize giving he explained, “Me and my friends when we started secondary school, we didn't have anything to do, but then our teacher told us about sailing and we just loved it and wanted to keep on going.”

Asked about what he did on the boat he joked that, “My job onboard was to be the fourth person and to try not to be in the way!”

In the Corinthian Division for all amateur crews Germany's Tanja Jacobsohn, a former 470 World Champion, sailing with husband Bernard Jacobsohn and Jan Scharrfesser, put in another great performance to finish eleventh in the race and take the Corinthian overall title from fellow German Maximillian Dohse with Sweden's Karl-Gustaf Löhr third.

At the final prize giving the competitors came together to honour their champions and the prizes, which included gifts from event sponsor Marinepool, were awarded. Delicious seafood and cocktails sponsored by Yanmar were served and International Dragon Association Chairman Vasily Senatorov praised the organisers and volunteers of the Yacht Club de Cannes on another superb event. He also invited all the competitors to join him at the remaining events in the Dragon European Cup which will take place as follows:

Vasily Senatorov also invited all Dragon sailors to join him at a very special Dragon 90th Anniversary Regatta, which is to be hosted by the Yacht Club Sanremo on Italy's beautiful Liguria coast from 5 to 13 October 2019. Already 120 teams have confirmed their entry and the final attendance is expected to be considerably higher as Dragon sailors and their friends and family travel from across the globe for this unique gala celebration.