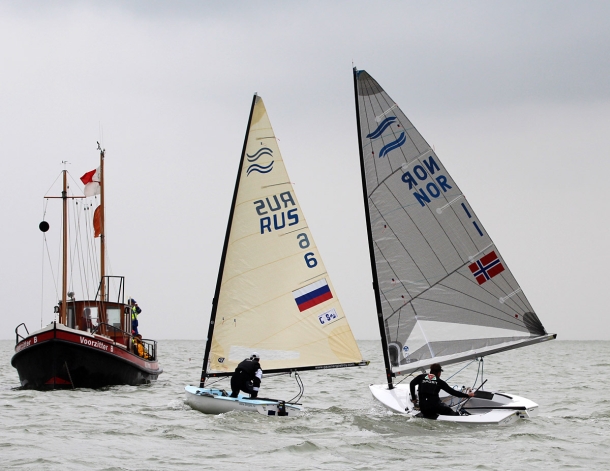 Anders Pedersen (NOR) and Arkadiy Kistanov (RUS) battle it out at the Finn Silver Cup. Photo Silver Cup Media.

Anders Pedersen (NOR) and Arkadiy Kistanov (RUS) engaged in a battle of wits on the third day of the Finn Silver Cup in Hoorn, Netherlands to slug it out for the overall lead. Kistanov narrowly missed out on all three race wins but the final score was was one win for Pederden and two for Kistanov. This left Pedersen leading Kistanov by two points with Nenad Bugarin (CRO) 23 points back in third.

The race team did a great job running three races in quick succession as a procession of looming, grey clouds and 'liquid sunshine' kept everyone eager to keep the pace up. The three tough races brought the regatta back on schedule after one was lost on Monday. Starting with 15-16 knots the offshore wind produced a range of conditions across the course making the racing very tactical and challenging for the 32 young Finn sailors from 17 nations.

Race 4 got away first time with Anders Pedersen (NOR) leading round the top mark from Kyle Martin (CAN) and and Fabian Pic (FRA). Pedersen extended downwind, but then on the second upwind, Arkadiy Kistanov (RUS) took a route further to the left and came back on a strong shift to round just ahead of Pedersen. However he forgot which course he was sailing and headed off down the reach. He only realised his mistake after Pedersen rounded and headed down the run. By then he had lost his lead and Pedersen sneaked through to win from Kistanov and Martin Robitaille (CAN).

Pic suffered a broken vang in race 4, and returned to shore to change his boom, missing race 5. Then Jack Arnell (GBR) suffered a ripped sail on the start line of race 5 and also missed the race. Otherwise the only casualties of the day were wet bodies and sore muscles with Oscar flag flying for free pumping most of the day.

It took two starts to get Race 5 away. This time Kistanov led at the top mark from Ondrej Teply (CZE), Philip Kasueske (GER) and Pedersen. Kistanov still led at the gate but Pedersen took a long tack to the right and came back just ahead to lead down to the finish. However it wasn't over and Kistanov eased through for a photo finish on the line to take the win from Pedersen. Teply crossed in third.

The wind decreased slightly for Race 6, with Oscar dropped at the beginning of the second downwind. It was another tight race with Pedersen leading Peter McCoy (GBR) and Mikolaj Lahn (POL) round the top mark. Kistanov was up to third by the gate and the positions remained the same up the second beat. The final downwind with free pumping removed was a more sedate end to the day though the wind picked up again for the approach to the finish line. Kistanov used the wind to the best advantage to first move past McCoy and then Pedersen to claim his second win of the day, with another photo finish on the line. It was an incredibly tight day between these two. To make things slightly more pleasant, the rain even stopped briefly in the final race, though the respite didn't last for long.

Pedersen commented, “It was a quite a rough wind, up and down and shifting 40 degrees back and forwards. So we just had to watch the clouds and hope that it went in your direction. The first race was good for me and in the other two I was leading but was caught when the guys came from behind with more wind so, it didn't turn out so well for me. But it makes up for yesterday.”

“I was trying to catch the big shifts. There were a lot of small shifts but the big ones were the ones you wanted, so you had be be bold and wait for them and not be too quick to tack.”

“It's all pretty close. It's a tough fight and a hard competition, The guys are pushing hard in every race. So it's definitely hard racing and no one is giving you a centimetre, so it's good racing for sure.”

Kistanov reflected on his day, “Today was a really nice day's sailing with a lot of hiking and a lot of free pumping. And a lot of shifts. I think I led all the races at some point but in the first race I went a bit wrong on the last downwind, so I lost first place. But other races were really nice and I could manage to win.”

“In the light winds in the last race it was a bit easier to go with the wind because you are not working hard, but you just need to see where the pressure will be next and go there.”

“The mistake in the first race was only my fault and without that I could have been first overall. We have five more races to go, so we will see. It will be nice I am sure.”

McCoy hasn't had the best week so far but a third in the final race today leaves him seventh overall. He said, “It was pretty wet today. The first two races I found quite difficult. It was quite shifty and really up and down. But I got a really good start in the last race and sailed my own race and managed a third.”

“We've got a lot of good sailors here this year and you are really punished for any mistake you make. Like any major Finn event you have to keep your head above it and keep going and keep plugging away. The competition has been really good and I'm looking forward to the next few days.”

The forecast for Wednesday is for a lot more wind and a bit less rain. Two more races will start from 12.00. The Finn Silver Cup consists of a series of 11 races up until Friday 11 July.