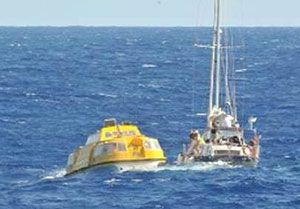 ATLANTIC OCEAN – Early on 27 December 2015, Fred. Olsen Cruise Lines' ‎ship Braemar came to the aid of a sailing yacht marooned in the middle of the Atlantic Ocean, with the dramatic rescue of the 14-metre Nicollet and her four Polish passengers and crew, who had been adrift for nearly three days. The Braemar was cruising from Santa Cruz, Tenerife to Bridgetown, Barbados when the Officer of the Watch ‎spotted the sailing yacht Nicollet on the radar, positioned in the Atlantic Ocean, 10 Nautical Miles from the cruise ship.

The yacht was drifting and no sails were hoisted, leading the Braemar's Officer of the Watch to contact the yacht to make sure that everything was in order. The answer came back that the steering gear had broken 2.5 days before on the voyage from Las Palmas to Dominica, since which the sea anchor had been deployed. The Nicollet was carrying two passengers, one male and one female, and two male crew members, all of Polish nationality.

Discussions between the two vessels led to the Fred Olsen tender, manned by six crew, to deliver tools, wood, oars and water to the yacht and the uplift of the two passengers for safe passage to Dominica to liaise with the Nicollet upon her arrival at the island. Meanwhile the yacht’s crew confirmed their ability to undertake the necessary repairs whilst at sea thereafter to continue their voyage.

“The sea conditions at the scene were very challenging, with three to five metres of swell, so in order to be able to carry out a rescue operation in such circumstances, everyone must know exactly what to do. Fred. Olsen Cruise Lines is proud to have a very robust safety culture and procedures in place across its fleet, and my officers and crew showed true professionalism and knowledge while carrying out this rescue operation. We regularly conduct safety drills and practices, but it was great to see such team work, spirit and determination implemented so successfully in a real-life situation.‎”