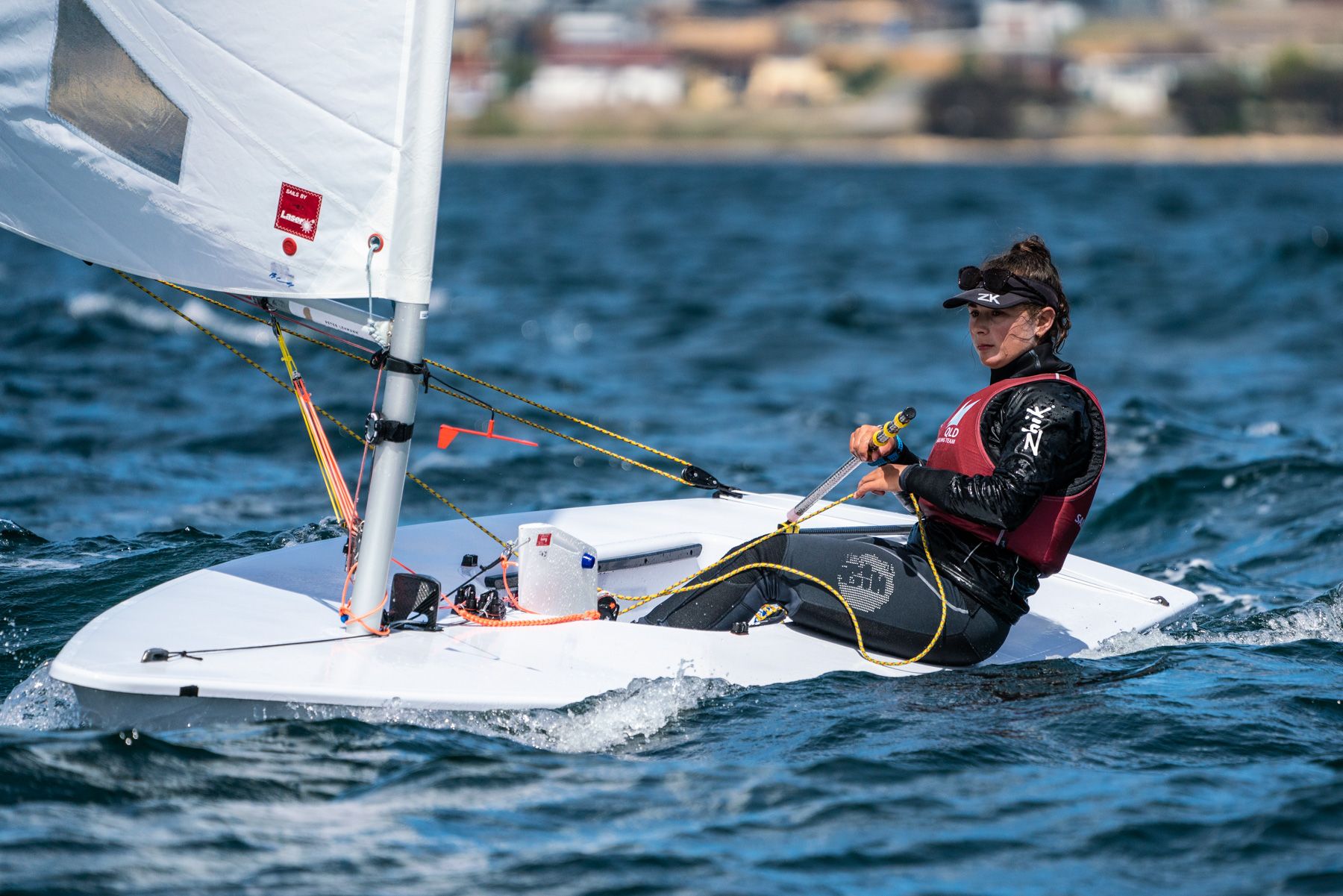 A new set of national youth champions were crowned after a stunning final day of sailing on the Derwent River at the 2019 Australian Youth Championships presented by the Australian Maritime College in Hobart today.

The regatta doubled as the second and final qualifying event for the Australian team for the 2019 Youth World Championships in Gdynia, Poland in July, so many athletes had cause for double celebration after the provisional team was announced during the presentation dinner at the Royal Yacht Club of Tasmania tonight.

There weren’t many teams prouder than the winners of the girls 420, Victorian twins Lily and Matilda Richardson, and local Tasmanian 29er talents Alice Buchanan and Dervla Duggan from the Sandy Bay Sailing Club, both of whom became back-to-back national youth champions.

“It was a really tough regatta.” Lily was quoted as saying after getting off the water today. “Hobart posed some interesting conditions, but we tried fight hard against the boys. We qualified the spot pretty comfortably, so now we’re ready to get back in to training this summer and work hard for the Youth Worlds.”

Middle Harbour Yacht Club’s Archie Cropley and Max Paul (29ers) and Woollahra Sailing Club and Royal Sydney Yacht Squadron’s Ryan Littlechild and Jack Ferguson (420) joined their female counterparts in the provisional team after taking out their respective classes, which was a dream come true for Paul who qualified for the team on his fifth attempt.

The star of the regatta was undoubtably Western Australia’s Zac Littlewood who added another three bullets on the final day in the Laser Radial, making it eight wins from ten races at the championships. He won the class by 14 points and will head to Poland as one of the favourites as he attempts to add a Youth World title to the open Laser Radial championship he won in Kiel, Germany last year.

Paige Caldecoat from New South Wales put in a commanding performance to take out the girls Laser Radial title and secure her place in the provisional team. “It’s really nice to come and get the job done here in Tasmania” she said regarding her win. “The goal from here is to perform well at the (Laser Radial women’s) worlds in Canada and then of course in Gdynia.”

The team of Will Cooley and Bec Hancock from NSW have dominated the Nacra 15 class this summer and can now add the youth national championship to the Sail Sydney, Sail Melbourne and Nacra 15 Class National titles they have won over the past two months. Bec spoke to her excitement about heading to the Youth Worlds when she said “It’s going to be incredible. It hasn’t really sunk in yet, but I’m sure when it does it’ll be the biggest adrenaline rush”.

The full provisional team named for the Youth Worlds is packed with talent and promise. Team selection is subject to Australian Sailing Board approval. Australian Sailing will now undertake a process to select the Team Leader/Coach and coaches, a process that is expected to be finalised in February.

The provisional team announced on the night was:

The championships wrapped up after a fantastic week hosted by the Royal Yacht Club of Tasmania, with many athletes already looking forward to next year’s event to be held at the Sorrento Sailing Couta Boat Club.