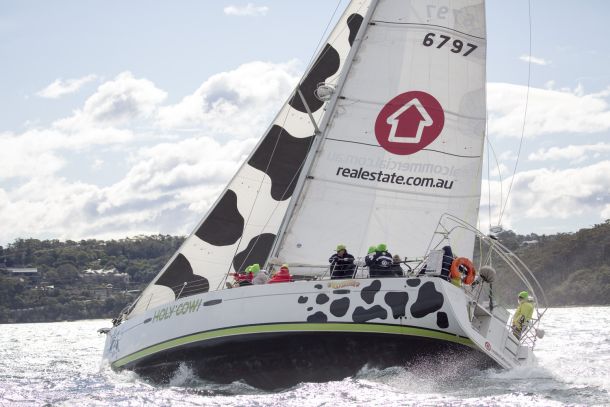 Throughout the Land Rover Winter Series participants have been waiting for a good blow, but the wind Gods left the best until last, throwing 18-20 knot gusty westerly winds at the entrants in the final Ladies Day Race of the Series – and a seal decided to get amongst the action too.

On hearing the weather report, many yachts did not leave the dock at the Cruising Yacht Club of Australia today, preferring the warmth of the Club where they settled in for lunch and hot drinks.

Principal Race Officer Steve Kidson reported he had monitored conditions between 10.30am and 11.30am following a forecast for high winds and nasty conditions.

“We saw 15-20 knots with gusts, which is fine to race, so we sent them around the full course. During the start, a seal appeared on the line, but we disqualified it because it went through the line the wrong way,” he said, laughing. “Just after the start, winds got up into the high 20’s, but then settled in at 18-22 knots. At times it would creep up to 24 and 25 knots, then settle down again. We recorded a gust of 30 knots, but a competitor told us they encountered a 33 knot gust, so it was a real workout for the crews.”

Cyrene 3, with Linsdey Gilbert at the helm, overcame a race-long challenge from the Paula Dock skippered Last Tango, beating it by one minute in Division 1 to have her name engraved on the Chris Lee trophy.

“I didn’t know her, but I am very happy to win her trophy,” Lindsey Gilbert said this afternoon. CYCA member, Kendi Kellett, a friend of Chris Lee’s and past president of the Associates Committee, presented the trophy.

Lee was tragically killed in a car accident in 1980. Her husband, the late Geoff Lee OAM, a yachting benefactor who owned the racing yacht Taurus, donated this highly-prized trophy in her memory.

She was a well-liked and respected figure at the CYCA and made an impression when she served on the Club’s Associates Committee. She came to sailing through her father, Frederick ‘Jack’ Palmer, a retail giant who skippered the prominent yacht ‘Even’ in such races as the 1955 Sydney Hobart.

Of beating Last Tango, Gilbert said: “They were very close all day and finished just behind us, which was quite exciting.

”It was quite windy,” she acknowledged, “but the crew did really well on a day that held its challenges.”

However, Last Tango’s second was enough to lift it into second place overall, five points behind Division 1 winner, Wax Lyrical (Dinah Eagle), which was third today and had led coming into the final of the three-race series. Just seven boats started and five finished Division 1 on this wild day.

Three yachts did not finish in Division B, including Superfine, when a female crew member suffered a suspected broken wrist. Owner, George Waldthausen, was quick to notify the start boat and CYCA, so an ambulance was waiting when the yacht returned immediately to the Club.

In Non-Spinnaker Division 1, Kim Clinton steered Holy Cow! to a near eight minute victory over Quetzalcoatl (Liz Borberg) to take out the series overall from the Rachael Mason skippered L’Attitude by one point; the latter boat finishing fifth today.

“Will there be a divorce, I hear you ask,” said Kim Clinton who co-owns the Beneteau Oceanis 50 with her husband and usual helmsman John, of Wolverines fame.

“I can’t answer that – it’s a delicate issue at the moment – we’ve got to sail the boat to Airlie Beach – that’s a lot of miles, so best I say nothing,” she said laughing on an earlier conversation relating to husbands and wives racing together.

Of the race, Kim said: “I was so pleased when I saw the forecast. Our boat’s heavy, so it was lovely to get a bit of wind. I really enjoyed it. Arthur Lane (a CYCA director) came and did main for us. It was blessing – he gave me hand signals so I was able to ignore my husband’s yelling for a change,” she said.

Kim was the first winner of the Land Rover Range Rover Evoque drive experience for a week back in April when the first Ladies Day was held. “It was fantastic – I love that car. John succumbed to the fact that his collector’s item (his old car) is past its use by date. When we sell our house, it will be a new Land Rover for us – a bigger one – as it has to fit John’s drum kit.”

Today, Kim could not believe her luck when she was drawn for the Noakes Group prize of a lift stand launch and two free laydays. “How lucky can I get? Both John and I really appreciate winning this prize, especially with the amount of time we spend on the boat,” she said.

Today the Evoque experience went to Division B winner, Starpac, so Lia Darby is in for a treat and no doubt Kim Clinton will be singing the vehicle’s praises to her.

For full results in the Land Rover Winter Series go to: http://www.cyca.com.au/sysfile/downloads/2015_winter/index.htm