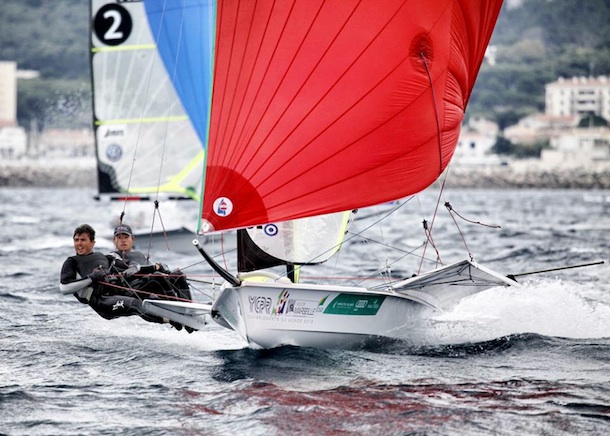 The European International Regatta season is in full swing and during July the Australian Sailing Team’s (AST) top Olympic sailors will compete for the respective 2014 European Championship titles at the Nacra17, 49er, 49erFX as well as Men’s and Women’s 470 regattas.

After a bronze medal at the last two ISAF World Cup events in Palma and Hyères, Olympic medallists Darren Bundock and Nina Curtis have their eyes set on a win in France.

Bundock and Curtis will face strong competition with the World’s best Nacra17 sailors attending La Grand Motte, including Australian Sailing Team colleagues and London 2012 medal winning coach turned athlete Euan McNicol and London Silver medallist Lucinda Whitty.  McNicol and Whitty finished fourth in Hyères, have done a lot of work at home since then and are keen to get back into it.  Lisa Darmanin and Jason Waterhouse complete the strong Australian Sailing Team’s Nacra17 squad, which also includes two development crews.

In the 49er class, the 2014 49er European Championship will kick-off tomorrow with racing starting in Helsinki, Finland on Tuesday, 8 July.  Olympic Champions Nathan Outteridge and Iain Jensen are back in the skiff after some weeks training with their Artemis America’s Cup team.  The duo last won a bronze medal at the ISAF Sailing World Cup in Hyères and will be looking at moving up the ranks in Helsinki.

There will be plenty of Australian crews to watch out for in Helsinki with the whole Australian Sailing 49er squad contesting the event.  Last week’s U21 Junior World Champions Joel Turner and Lewis Brake as well as Kiel Week fourth placed Will Phillips (VIC) and Jasper Warren (WA) will be racing in Helsinki.

The Australian contingent is up against strong fleet including London Olympic silver medallist, 2013 49er European and World Champions and Hyères winners Peter Burling and Blair Tuke from New Zealand.

In the 49er FX Caitlin Elks (WA) and Tess Lloyd (VIC) will be the only Australian Sailing Team crew to compete at Helsinki.  London silver medallist Olivia Price (NSW) and crew Eliza Solly (VIC) have opted to stay home for medical reasons in order to give Price’s injured ankle time to recover ahead of the Rio Test event in August.

Later in the week, the Men’s and Women’s 470 European Championship will start with racing taking place in Athens, Greece from Thursday, 10 July.

Mat Belcher and Will Ryan are the defending 2013 470 European Champions and will face a strong fleet with the best 470 crews using the event as a test regatta ahead of the World Championships in Santander in September.

In the 470 Women’s dinghy crew combinations within the Australian Sailing Squad have changed in the last month.  The new combinations of Jaime Ryan (QLD) and Carrie Smith (WA) plus Sasha Ryan (QLD) and Amelia Catt (TAS) had their first regatta at Kiel together.  Athens will be the first event for newly teamed up Sarah Cook (VIC) and Jacqui Gurr (VIC).

All these European regattas run over six days.