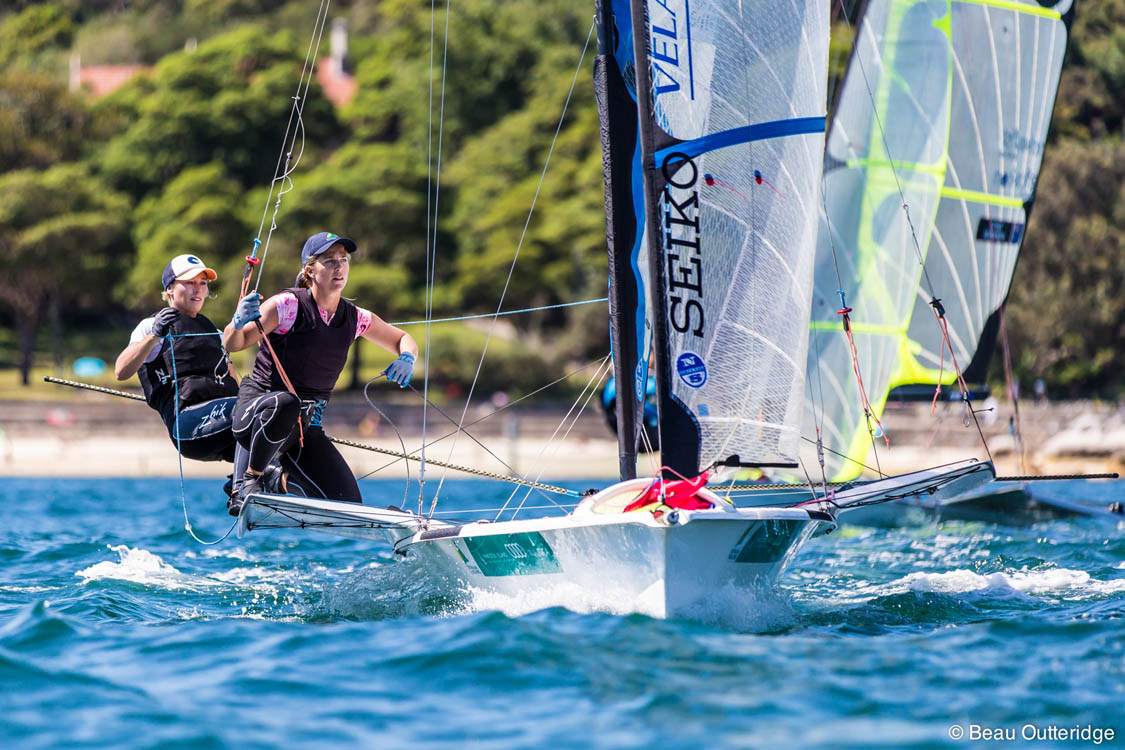 With an international Sail Sydney fleet of more than 400 competitors racing out of Rose Bay there are a multitude of stories worth telling. One of the more high profile is the reunion of 49erFX combination Haylee Outteridge and 2012 London Games silver medallist Nina Curtis fresh from her Nacra 17 Olympic qualification tilt with Darren Bundock.

Team selection for Australia’s 49erFX position at the 2016 Rio Olympic Games is still up for grabs. Outteridge and Curtis know the status quo, and they are well aware they’ve left their run late so their immediate focus is on the Australian nationals, North American championships and Sailing World Cup Miami in January, then the skiff class’ world championship in February.

When Bundock and Curtis missed out selection to the Australian team she took some time to gather her thoughts before approaching Outteridge, her former sailing partner, who happened to be ready to go with a boat for the worlds. “She was like a coiled spring,” Curtis laughed.

It’s been two years since the women paired up in the newest women’s Olympic skiff class and at Sail Sydney Curtis says her execution is coming back faster than anticipated. “Sail Sydney came at a great time for us; to run-through getting around a race course before the nationals at the same venue but without the pressure. Our main goal is a good result at the world championship next February.

“I’ve learnt a lot sailing with Darren [Bundock] and I feel really lucky that while I’ll be behind on a lot of the FX aspects, being quite raw in the boat, maybe I can bring some new knowledge. I feel like I’ve learnt so much and am excited to transfer this to the new boat.”

“We are just trying to learn together as fast as possible,” Outteridge added. “We feel no pressure because we’ve come together so late. We are going to enjoy the process and see how far we can take it.”

Current Laser Radial youth world champion Conor Nicholas from West Australia leads the pack and is one of a strong west coast showing at the top of the results sheet. “We get these conditions all the time back home, nice and windy,” he said of today’s ample sea breeze.

“We have a really strong training group and we are coached by some of the best in the world in Arthur Brett and Tristan Brown. Having good depth in the squad is showing in our development, and the results reflect across all classes, not just in the Lasers.”

Third from a sizeable Radial fleet of 42 is WA teammate Alistair Young who is on his way to World Sailing’s Youth World Championships in Malaysia at the end of this month.

“Doing these regattas gets your mind-set into gear,” Young says. “Normal training isn’t enough; you need to get your head switched on for starts and playing the fleet. The field is super tough here, if you miss one little wind shift or make a mistake you can lose heaps of places.”

Royal Prince Alfred Yacht Club Intermediate Optimist sailor Olivia Williams had a great opening day and sits second among a hefty starting list of 42 of the popular one design dinghies.  On handling the afternoon’s gusty winds she said: “I managed OK…. I like the big winds. This regatta last year was my first. Sailing in Pittwater it’s really flat; here you get a chance to get on the waves!” Next for Williams is the AIODA Optimist Australian Championships at Georges River in January where she says a top three placing is not out of the question.

Forecast winds eventuated on day two of the four-day Sail Sydney series; 10kts NNE to kick-off the morning session and up over 20 knots for the afternoon’s closing races. There was plenty of wave action for the Laser fleets on their track between Sydney Heads, where the swell is often punishing. The consolation was surfing downwind with pace and getting up close to the gigantic Rolex Sydney Hobart big boats leaving the harbour for offshore training.

Tomorrow’s forecast is for more of the same – nor’easters 15-25 knots. Sunday, December 20, could bring 30 knots to the racetrack. Joining the action tomorrow are the RS:Xs, Formula boards, Sabots, Tasars and Vipers.

The progressive pointscores for all divisions racing at Sail Sydney are available here.