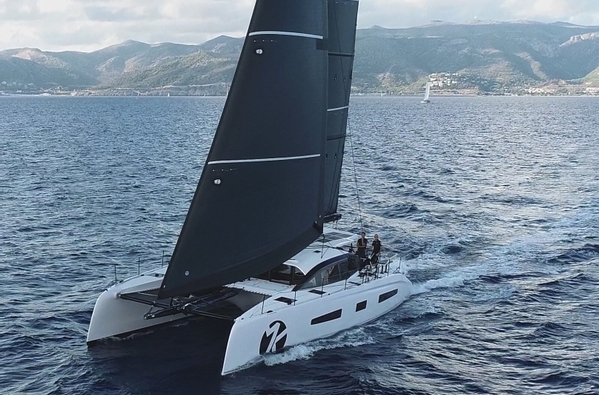 The Outremer 55 was elected winner in the bluewater cruiser category. Pic - Outremer

Outremer’s latest catamaran, the Outremer 55, took first place in the bluewater cruiser category at the European Yacht of the Year 2022’s ceremony on Friday, January 21, 2022.

Usually held during the BOOT boat show in Düsseldorf, the event was cancelled for the second year running due to Covid and held virtually instead via live broadcast on YouTube.

Widely regarded as the ‘Oscars’ of the yachting world, the European Yacht of the Year awards benchmark quality and performance across the industry. Winners are elected through an impartial jury of twelve, each from key sailing media across Europe. This year saw jury members from Voiles et Voiliers (France), Yacht (Germany), Yachting World (UK), and Vela e Motore (Italy).

This year the Outremer 55 was elected winner in the bluewater cruiser category over four other worthy nominees including the Ovni 400, the Allures 51.9 – also part of Grand Large Yachting – the Windelo 50 and the HH OC50.

“We are extremely proud that our latest addition to the Outremer family, the Outremer 55, has won the bluewater cruiser category. This is a superb reward for the expertise and hard work our teams have provided, who are involved on a daily basis in designing and building boats that are both elegant, high-performance and comfortable, to help our sailors achieve their dreams,” says Xavier Desmarest, Co-Founder of Grand Large Yachting.

Since 1984, Outremer has been building safe, seaworthy and comfortable catamarans, specially designed for long-distance cruising with complete peace of mind. Performance and reliability are an integral part of the Outremer ethos. These qualities are reflected in the aesthetics and features of our catamarans.

With over 350 crews sailing around the world, and millions of nautical miles sailed, Outremer has created a unique community of enthusiasts. Their experience is a source of innovation and continuous improvement, making Outremer a key player in ocean cruising worldwide.

The vocation of the Grand Large Yachting group is to enable those wishing to travel to make their dream of long-distance cruising come true by providing them with all the elements they need to do so with complete peace of mind and respect for the planet.

Founded in 2003, Grand Large Yachting, with its shipyards Allures, Garcia, Gunboat, Outremer and RM, is the international leader in ocean cruising. It offers sailboats for all types of voyages, with one or two hulls, in aluminium, composite, carbon or wood.

Recognized for the quality of its reliable sailboats, the group is known for – and specialises in – accompanying its sailors throughout their voyage, from the idea to the return. Grand Large Yachting is also the organizer of the Grand Large Yachting World Odyssey 500, a rally which, 500 years after Magellan’s voyage, brings together 32 boats to sail around the world in a fleet and with a stopover over three years.

You can find further information on the Outremer 55 here: https://catamaran-outremer.maglr.com/outremer-55-en/index