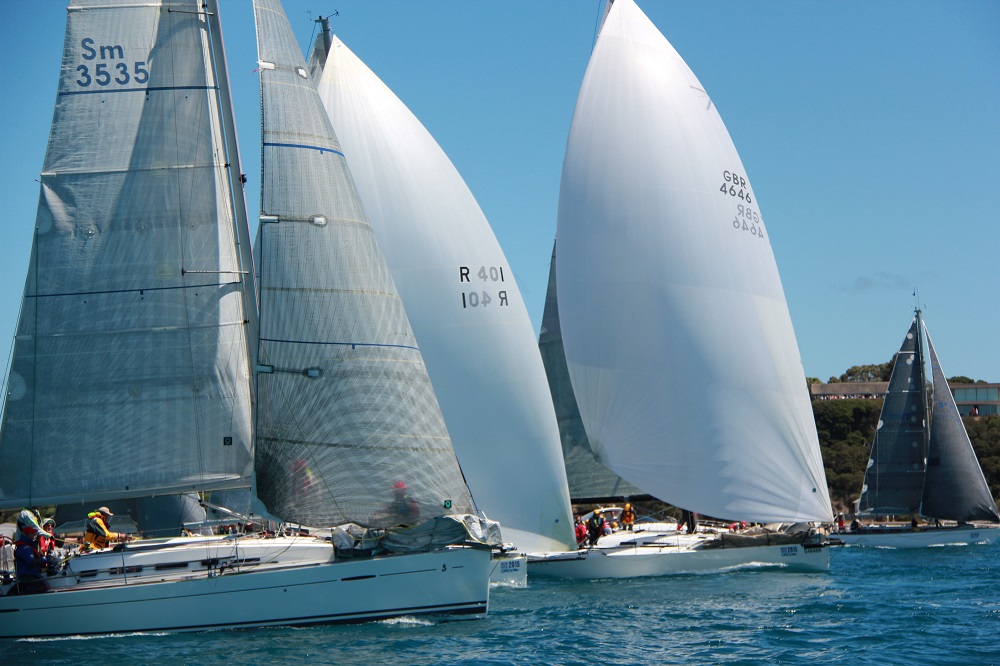 Off and racing in the Melbourne to Devonport 2017 - ORCV pic

Christmas is a busy time for Melbourne’s Ocean Racing Club of Victoria and among its high profile events is the 195 nautical mile Melbourne to Devonport Race for the Rudder Cup, starting 27 December each year.

Colloquially known as the ‘post-Christmas dash across the paddock’ (Bass Strait), entry is now open online at the official site, where prospective competitors can also find the Notice of Race.

Quick off the blocks to enter is trio of Victorian owners: Bruce Early (Afrayed Knot), Neil Sargeant (Mersea) and John Hall (Wingara). Hall says of his 32 year-old Zeston 40, “She was built for comfort, not for speed, but she goes when it blows!”

Competitors in the Melbourne to Devonport Race, the oldest yacht race in Australia and fifth longest running in the world, are racing for the historical Rudder Cup.

“It’s valued at $180,000 – it’s pure silver,” says ORCV’s Lynne Wilton of the Rudder Cup, which was struck and donated in 1907 by Thomas Fleming Day, editor of the American magazine ‘Rudder’.

Day had written to his friend, T. A. Dickson, then Commodore of the Geelong Yacht Club, suggesting a race across Bass Strait to Tasmania in order to promote the sport of yachting. The trophy, a prize for the winner, was worth 60 guineas, a fortune at the time.

The inaugural race was run from Port Phillip Heads to Low Head at the mouth of the Tamar River, a distance of 198 nautical miles. It was won by the 14.6m yawl, Thistle, skippered by Edgar Newland with a crew that included his wife and daughter.

Conditions were reported to be very rough, so much so that Mrs. Newland refused to relinquish the Rudder Cup, in her efforts to dissuade others from attempting such a dangerous race. But 110 years on, competitors continue racing across Bass Strait for the honour of winning that Cup.

This original trophy came to light again in the 1960's when it was presented by Edgar Newland's son to the then Cruising Yacht Club of Victoria (now the ORCV) and continues to be presented to the overall winner of the race.

“The race ticks a lot of boxes, in that it is testing, it is also good for those wanting to test their crew beyond the bay – and is a good one if you want to be home in time for New Year,” Wilton comments.

While Wilton, who is filling the role of ORCV’s ‘Race Champion’ for a second year, stays ashore, her yacht ‘Christine’ will be raced to Devonport by partner Paul Bunn.

“I’ll be in Melbourne and then in Tasmania to run the race. I’m usually on my way when the race starts,” reveals Wilton, whose commitment does not end when the Race Director flies in. She still has big job on her hands looking after media, sponsorship, committee, food, beverages and more on arrival at the Mersey Yacht Club, which finishes the race.

“Then of course the boats start coming…,” she adds, of her continuing duties, skeds, predicted times of arrival etc,” she says.

“It will be an interesting time at Mersey Yacht Club. They’re also hosting the 2019 Oceania Laser Australian Championship from 1-9 January – 100 plus boats.

“Getting back on its feet after the terrible floods a couple of years back, they received a grant to upscale the Club, so a new bar will open up below where there’s been a storage area encased by a metal fence which we laughingly nicknamed the ‘Cage Bar’.

“We’ll be the first to test it; get the benefit and hype of the new amenities,” says Wilton, adding: “Mersey loves to be involved with us – it’s their biggest race of the year, the Rudder Cup.”

The Melbourne to Devonport Race starts off Portsea, a pretty sea-side town approximately 60 kilometres south of Melbourne, and finishes at the entrance of the Mersey River in Devonport, on the on the north-west coast of Tasmania.

The record for the Category 2 race has been held by Prowler (Joe Westerlo) since 1998, in the time of 19 hours 32 minutes 56 seconds. Despite many attempts since, the record remains intact, thanks mostly to the weather.

For Notice of Race and to enter, go to: www.orcv.org.au/sailing/races/devonport