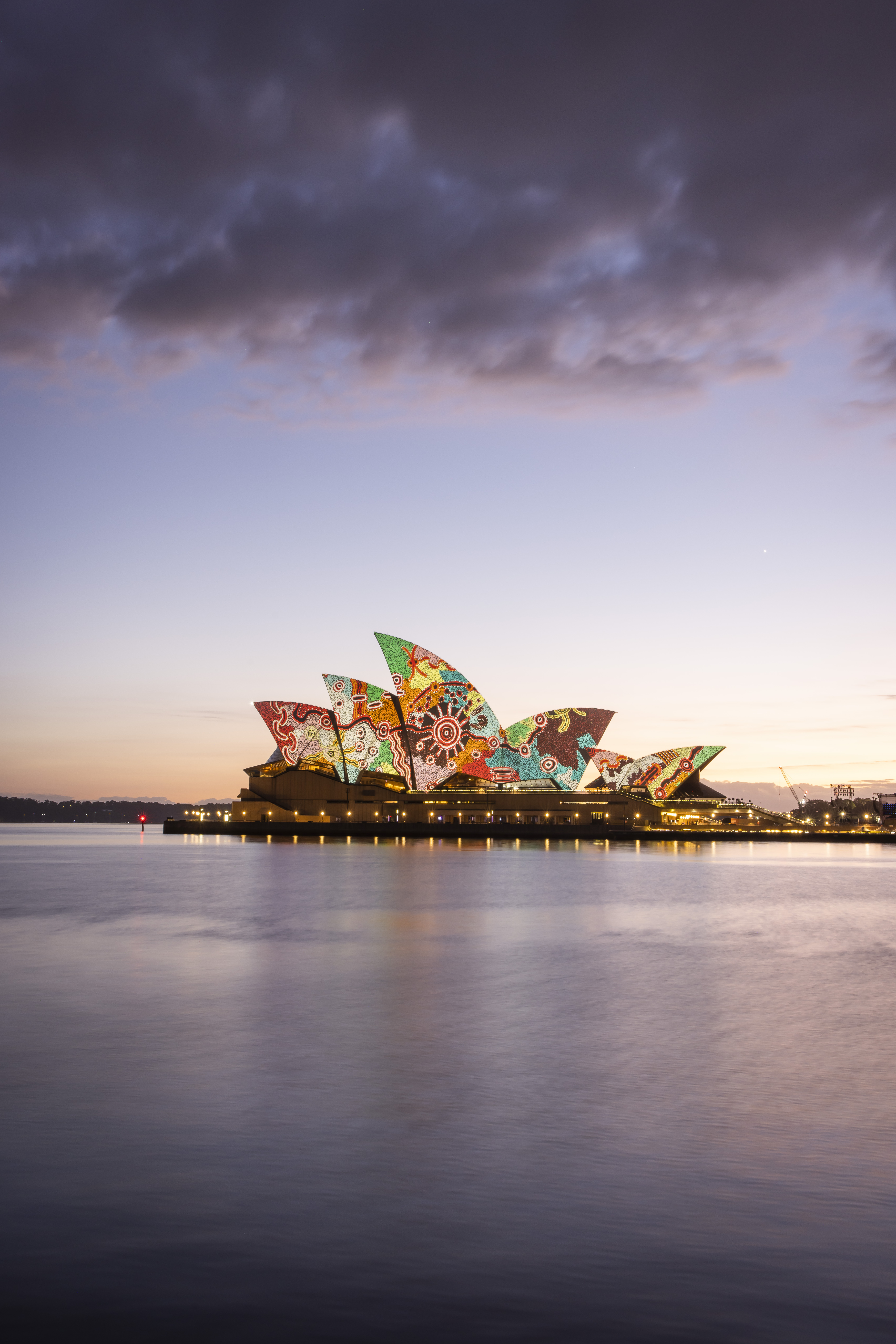 The Sydney Opera House sails created the perfect canvas to capture a spectacular piece of First Nations art at Barabiyanga (burra-bee-yan-ga) [meaning ‘before sunrise’ by the Eora people], in recognition of Australia’s First Nations people and culture on Australia Day.

As the striking and traditional artwork shone brightly on the sails over the calm waters of Sydney Harbour today, a bullroarer and clapsticks were sounded by local Song Men to reflect the Gadigal interpretation of the Goanna cultural motif.

Shortly after first light, the Aboriginal flag was raised alongside the Australian National flag on top of the Sydney Harbour Bridge.

Australia Day in Sydney has once again led the nation in honouring the strength and resilience of our First Peoples through powerful representations of culture and history. Reflecting at Dawn honours and commemorates the past, while working towards reconciliation on Australia Day – a day that means different things to different people.

Acclaimed Western Desert artist and elder Yadjidta David Miller was commissioned to create the artwork. Mr Miller, a senior Pitjantjatjara man, lives in the remote community settlement of Pipalyatjara in the APY (Anangu Pitjantjatjara Yankunyatjara) Lands of northern South Australia. He travelled to Sydney to see his artwork projected on to the Opera House sails.

Mr Miller, 70, said he was honoured by the recognition the projection on the Sydney Opera House would bring to him, to his arts organisations, to his ancestors and to his people today and to the next generation of First Nations artists.

The artwork tells the Ngintaka Tjukurpa (Perentie dreaming story). Ngintaka, the giant Perentie lizard, steals a special grindstone, stopping at waterholes and finding food sources in his travels across the lands with it.

Mr Miller is a Director of Ninuku Arts, an Aboriginal-owned and incorporated art centre, out of which he and the artists of Pipalyatjara and Kalka work.

Over the past decade Ninuku Arts has exhibited work nationally and internationally, becoming known for its powerful colour palettes and traditional dot painting of the Western Desert movement – and has encouraged a diversity of styles and techniques between artists.

“Our families, Anangu [which means ‘people’ in Pitjantjatjara], come in and do paintings. They learn at Ninuku – learning, training and painting. After all our old people leave – it’s our turn. We’ll be passing [painting] to our family and they’ll be passing on to their family. It’s the generations – it goes on and on. We are sharing our paintings, our pictures. We’re already sharing our story, our cultural way in the painting.

“The stories that you see in the paintings – that’s our story and our Dreaming,” he said.

Mr Miller’s Dawn artwork will connect key elements of the Australia Day 2022 program. The Ngintaka songline passes through Uluru – where Goanna’s hit song Solid Rock, Sacred Ground was originally written – and the Inma (dance) that features in the mesmerising performance of the Solid Rock piece at the Australia Day Live concert tonight, was partly filmed in Uluru.

Australia Day Council of NSW Chairman Andrew Parker said the Australia Day in Sydney program continually strives to ensure First Nations culture and involvement is at the forefront as we evolve and develop an inclusive and respectful program. In order for the program to be authentic, it needs the guidance of First Nations representatives,” Mr Parker said

Yvonne Weldon, Deputy Chair of the Australia Day Council of NSW, and of the Metropolitan Local Aboriginal Land Council said, Australia Day is a time to Reflect, Respect, Celebrate and Commemorate: “We should do this today, tomorrow and all along the journey. Let us not forget that we are all walking in the footsteps of the ancestors of the world’s oldest continuous culture.”

Ms Weldon said: “Moving forward, there needs to be continuous and harmonious change, truth telling and story sharing. It has already started in many aspects, especially when we think about the changes we are addressing on January 26 – the meaningful program here in our first state, where the day starts with recognising the first people and ending at the very location it began, with a celebration of our culture. My people are part of the story, and we are part of this nation’s history, present and future.

“The Sydney Opera House is more than a culturally significant and internationally recognised icon – the land on which it stands was known to its traditional custodians, the Gadigal people of the Eora Nation, as ‘Tubowgule’ meaning ‘where the knowledge waters meet’. Tubowgule’s long history shows it as a place where the Gadigal gathered, feasted, sung, danced and told stories.

“The Dawn Reflection is a significant and well-deserved celebration of David Miller’s work, his story, his influence as an artist and an Anangu elder. It is about sharing our ancient traditions with modern Australia in an effort to gain deeper understanding and unity,” Ms Weldon said.