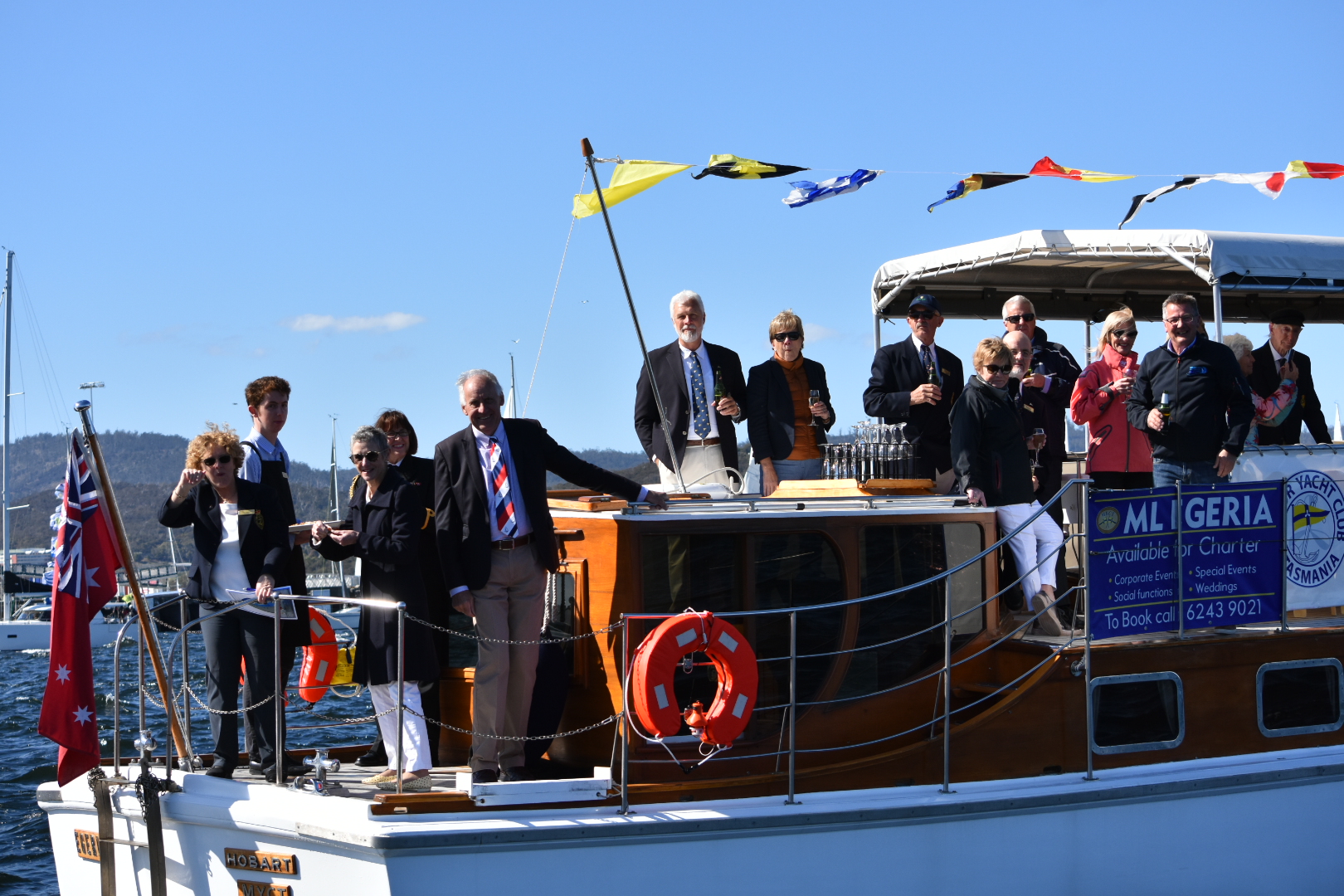 If there is one thing about Tasmanian sailors and their boats, it must be their longevity – obviously, something in the water, or their easy access to some of the finest racing and cruisers waters in the world, albeit chilly at times.

Weather-beaten sailors in their 70 and 80s, a yacht more than a century old, a Huon-pine hulled Sydney Hobart winner of 72 years ago, a restored national champion that began winning 90 years ago all took their pride of place in today’s traditional Opening Day of the Sailing Season on Hobart River Derwent.

Why wouldn’t the sailors and their boats continue to enjoy racing or cruising in the Derwent for so many summer (and winter) seasons when you can weather like yesterday: a warmish 17 degrees, a 15-knot east-sou-east breeze, barely a white cloud in the sky.

It was a day the Governor of Tasmania, Kate Warner AC obviously enjoyed, taking the formal salute from the stern of the classic motor launch Egeria, accompanied by Commodore Tracy Matthews from the Royal Yacht Club of Tasmania, whose club’s earliest members inaugurated Opening Day on the Derwent back in 1880.

Leading the fleet past Egeria, anchored in Sullivan’s Cove was Black Magic, with Bellerive Yacht Club’s Commodore Graham Mansfield standing to attention to salute Her Excellency. Then came the cutter Westward, winner of the 1947 and 1948 Sydney Hobart races, sailing out of Constitution Dock especially to mark the upcoming Rolex 75th Sydney Hobart.

The average age of her crew of members of the Maritime Museum of Tasmania, we asked? “The same age as the boat – 72 years!” came the reply from the bearded old salts.

Close astern came the Muir family’s Trevassa, like Westward designed and built by their forebear Jock Muir and one of the finest examples of Tasmanian boat-building craft. The famous 21-foot Restricted class Tassie Too, made up the lead group, helmed by a descendent of her champion helmsman/skipper, Batt.

An hour before the fleet assembled we had the wonderful sight of Gipsy, a beautiful yawl powering up the river under full sail to participate in her 102nd Opening Day Parade of Sail.

Near 200 craft, yachts and motor cruisers and a few smaller boats, took part in what RYCT Commodore Matthews described as a “perfect day on the Derwent, a foretaste of a great summer of sailing on this sparkling river.”

As is tradition, the Governor had the difficult task of selecting the winner of the ‘Beauty Prize’ from among the vast armada of yachts and motor cruisers and today she singled out the Muir family’s Trevassa, designed and built by their forebear Jock Muir and regarded as a wonderful example of Tasmanian boat-building.

Opening Day and the Parade of Sail on Saturday was the start of a big weekend for yachting in Hobart and the River Derwent.